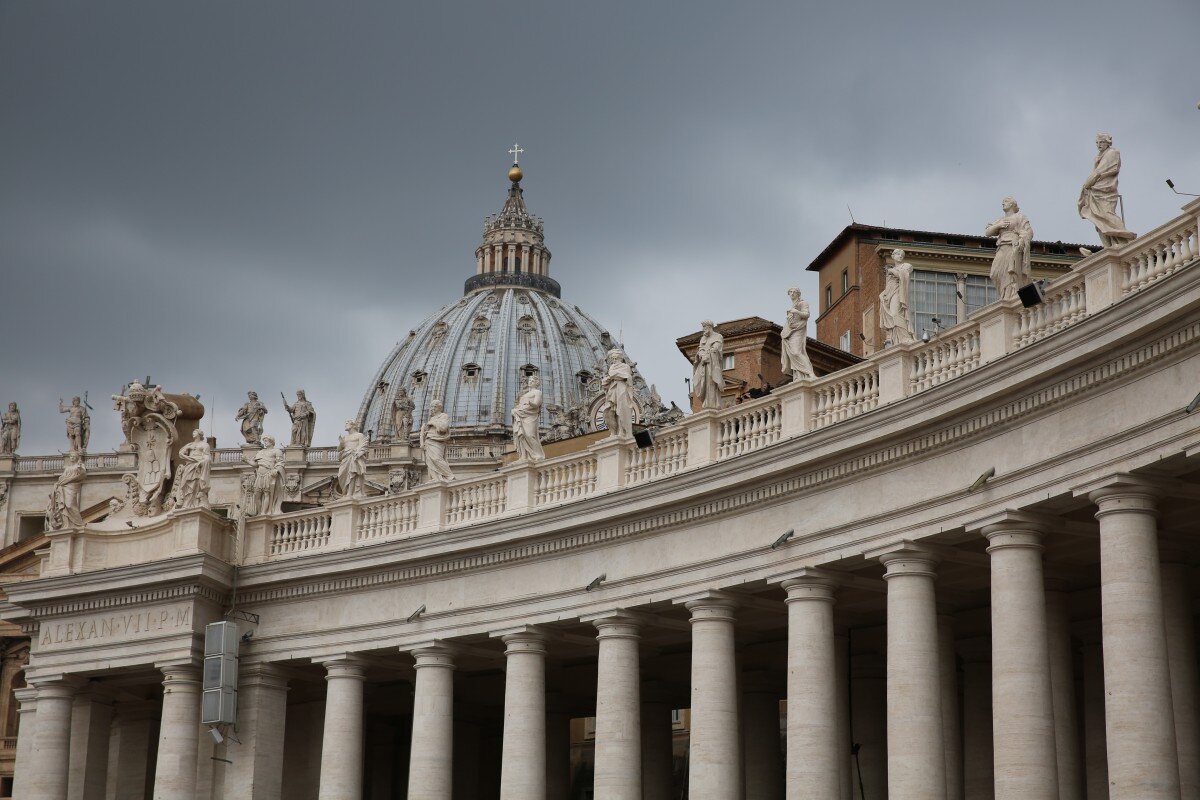 After the nuclear war in the Middle East at seal 6, the UN will probably come in and enforce peace. Jerusalem will be made into an international city. The Temple Mount will likely be given to the pope, with orders to establish an interfaith temple with the outer courtyard open to all religions. Israel’s borders may also be open for immigration to all faiths at that time. If so, there may be an early ingathering (for those who choose to go to Israel at that time).

Mussolini created the Vatican in 1929, patterning it after the Old City of Jerusalem. Some see the Vatican as the pope’s temple. Inside this temple, the pope sits on a throne. Catholic doctrine teaches that the pope is infallible when he sits on his throne. 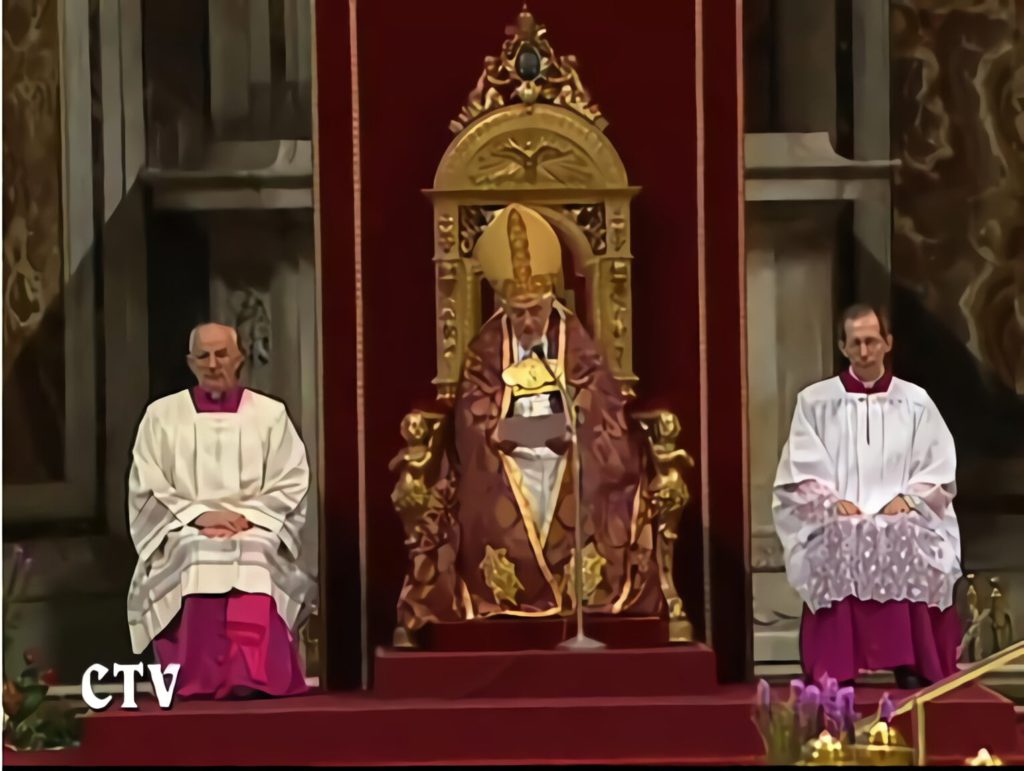 Revelation makes it clear that we should only prostrate ourselves in worship to Elohim.

Hitgalut (Revelation) Revelation 22:8-9
8 Now I, Yochanan, saw and heard these things. And when I heard and saw, I fell down to worship before the feet of the messenger who showed me these things.
9 Then he said to me, “See that you do not do that. For I am your fellow servant, and of your brethren the prophets, and of those who keep the words of this book. Worship Elohim.”

However, Catholic priests prostrate themselves to the pope in reverence and worship. 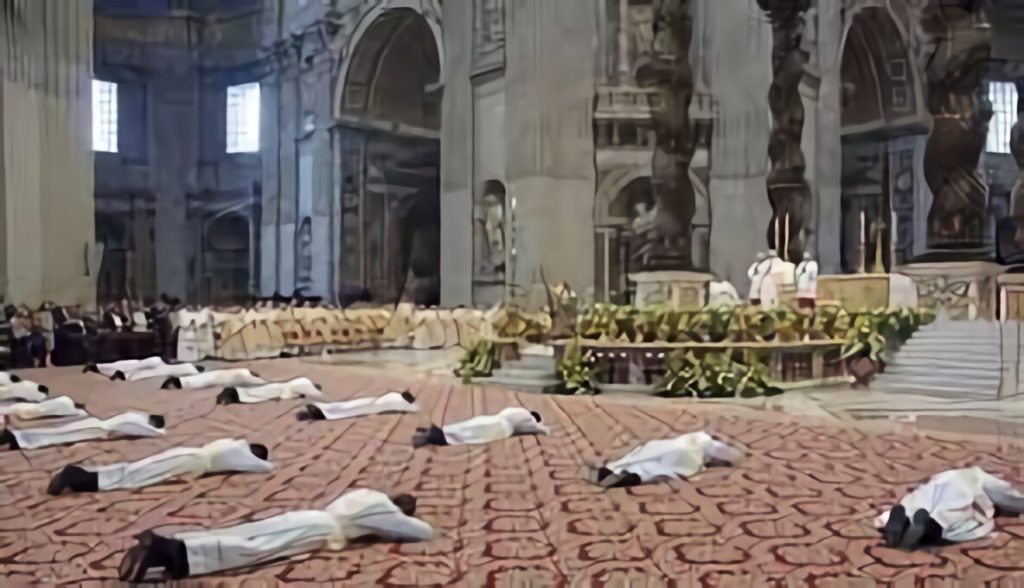 If we should only prostrate ourselves to Elohim, then for men to prostrate themselves to the pope is to treat him as Elohim. Many believe all this serves as a minor fulfillment of 2 Thessalonians 2:3-4, which tells us that there will be a man of sin (i.e., a man of lawlessness) who will sit in a temple of Elohim, as Elohim, while pretending to be Elohim. (And if the present pope moves his throne to Jerusalem, it would be a major fulfillment of this prophecy.)

Thessaloniqim Bet (2 Thessalonians) 2:3-4
3 Do not let anyone deceive you in any way, because that Day will not come unless first comes the falling away, and the Man of Sin is revealed, the son of perdition,
4 the one opposing and exalting himself over everything being called Elohim, or object of worship, so as for him to sit in the temple of Elohim as Elohim, showing himself that he is Elohim.

Scripture can remain silent for hundreds of years while the stage is prepared for action. Today (2022) the four horses have been loose for hundreds of years, getting the world ready for a nuclear crisis at seal 6. When seal 6 is opened and the nuclear war takes place, the UN can take control of the Middle East fairly easily.

In the pictures that follow, Saint Peter’s Basilica in Vatican City is on the top left, and a model of the Dome of the Rock is bottom left. A drawing of the Temple of Jupiter Stator (i.e., Satan) is on the right. All three have a cupola (breast-like structure), with a nipple-like protrusion on top. The pope could occupy any one of these temples without modification, because they are all designed for and dedicated to Satan. [The picture on the right is a facsimile copy of I Quattro Libri dellArchitettura by Palladio, published in 1570.] 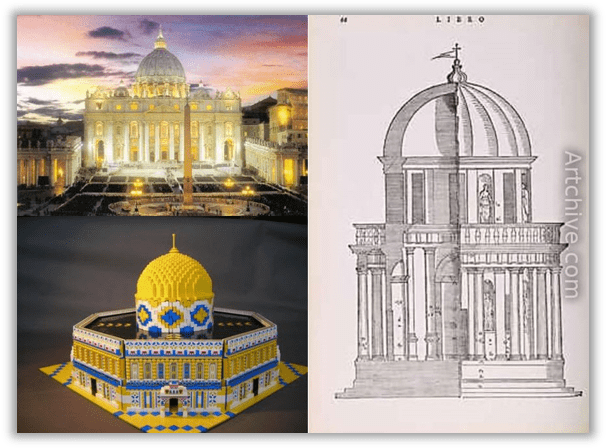 The pope met with Islamic leaders inside the Dome of the Rock in 2005. Could they have discussed where to place the pope’s throne? 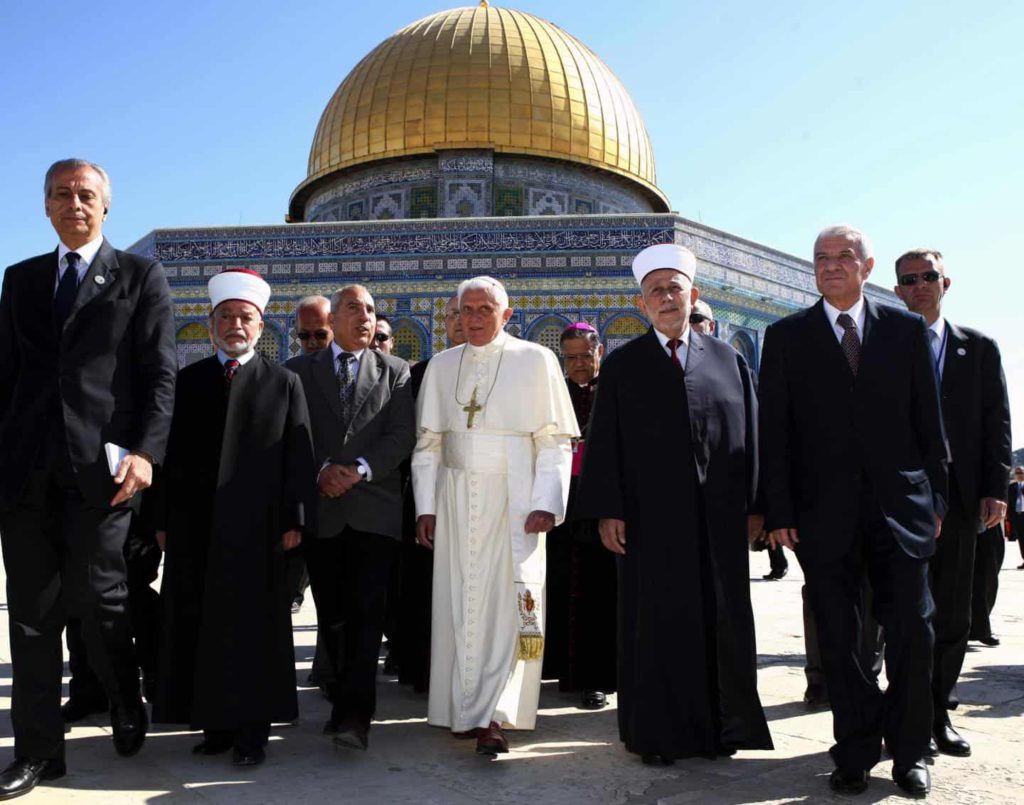 These are the remains of an altar to the sun god Zeus (which is another name for Satan). This throne used to sit in Pergamos (now in Turkey).

Notice how the rock inside the Dome of the Rock (below) has the same basic shape. It would not take long to build a similar throne there. 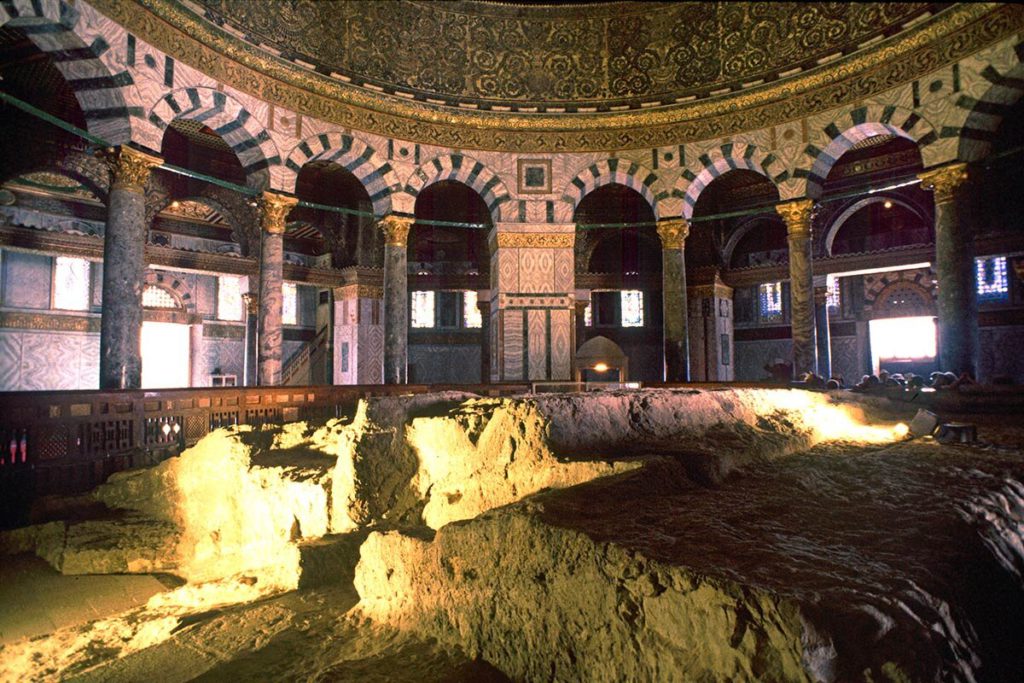 There are many interpretations of Daniel 9, and we will explore some of them as this study progresses, but many see it speaking of a seven year tribulation period.

Daniel 9:25-27
25 “Know therefore and understand, That from the going forth of the command To restore and build Jerusalem Until Messiah the Prince, There shall be seven weeks and sixty-two weeks; The street shall be built again, and the wall, Even in troublesome times.
26 “And after the sixty-two weeks Messiah shall be cut off, but not for Himself; And the people of the prince who is to come [Titus] Shall destroy the city and the sanctuary. The end of it shall be with a flood [cup judgments], And till the end of the war desolations are determined.
27 Then he [pope] shall confirm a covenant with many for one week; But in the middle of the week he shall bring an end to sacrifice and offering. And on the wing of abominations shall be one who makes desolate, Even until the consummation [wedding], which is determined, Is poured out on the desolate.”

Yeshua fulfills verse 25. He also fulfills the first part of verse 26, in that He was cut off, but not for Himself. The prince to come probably refers to the Roman General Titus, who destroyed the city and the sanctuary in 70 CE. From here this passage turns into a future fulfillment, as there was no flood in the first century, either literal or spiritual. There will be a flood when the cups of wrath are poured out after trumpet 7. The consummation refers to the wedding feast which takes place at Armageddon, when Yeshua takes His bride.

Some tell us that Yeshua fulfilled verse 27, in that He established a covenant with many. However, the covenant Yeshua confirmed lasts longer than one week. Instead, this verse may refer to a 7 year tribulation period that will be confirmed by the anti-messiah. It is expected that in the middle of the week the anti-messiah will bring an end to the sacrifice and offering, while one who makes Yahweh’s worship desolate (perhaps the Islamic Mahdi) will be “on the wing of abominations” (referring to the abominable temple).

Anti-Semitic Catholics and Muslims are clearly coming together, to the detriment of the Jews. A joint group of sixty Catholic, Christian, and Muslim leaders who met in Geneva, Switzerland in November of 2010, to “call for the formation of a joint working group which can be mobilized whenever a crisis threatens to arise in which Christians and Muslims find themselves in conflict.”

Paragraph 841 of the Catholic Catechism also shows favoritism toward the Muslims, saying they are included in the plan of salvation, even though they reject Yeshua.

841 The Church’s relationship with the Muslims. “The plan of salvation also includes those who acknowledge the Creator, in the first place amongst whom are the Muslims; these profess to hold the faith of Abraham, and together with us they adore the one, merciful God, mankind’s judge on the last day.”

Now let us step back a bit, and realize that at another level, Islam, Christianity and rabbinical Judaism all belong to Babylon, and are all collaborating to build a one world government, with a one world religion. Below, Orthodox Jewish Grand Rabbis Yona Metzger (Ashkenazi) and Shlomo Amar (Sephardic) proposed a United Nations of Religions to the pope in 2004. 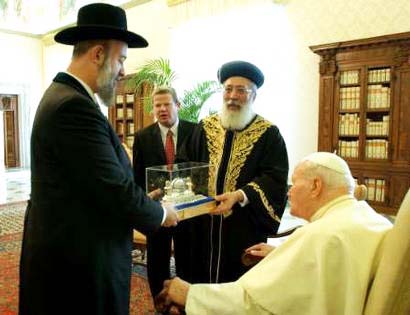 What is a “United Nations of Religion” but a one world religion? And if Christianity and Islam are the two legs of Nebuchadnezzar’s Babylonian statue, then it should not be difficult to see how the rabbinical order (which got its start in Babylon) also fits into the plan.

When there is a nuclear exchange in the Middle East, most Jews, Christians, and Muslims will compromise on their faiths to avoid any further nuclear war. The UN will endorse a one world religion led by the pope, saying that it will bring peace, and the pope will go on to establish an interfaith temple with the outer courtyard open to the gentiles.

It may be that the nuclear crisis at seal 6 will be limited, or it may be a full-blown nuclear war (as predicted in Albert Pike’s letters). Either way, it should serve to propel the people toward a one world government which will also set the stage for the tribulation.