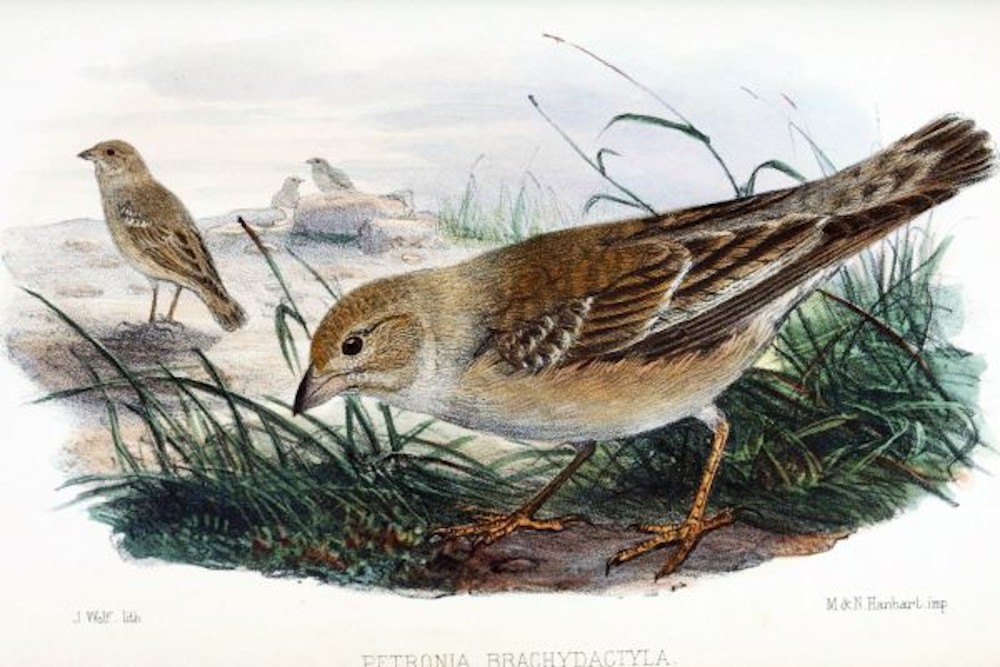 Yeshua told two of His disciples that the things of the Torah and the Prophets speak of Him.

Luqa (Luke) 24:27
27 And beginning at Moshe and all the Prophets, He expounded to them in all the Scriptures the things concerning Himself.

So, if the things of the Torah and the Prophets speak of Yeshua, then how does the cleansing of a leper speak of Him, and His atoning sacrifice for the world? First let us look at the Hebrew word for leprosy, which is the Hebrew word tsaraat (צרעת), which refers to an affliction of the skin.

In some languages, the word leprosy refers to a specific kind of leprosy, whereas in Scripture it refers to a general condition in which the skin is afflicted. Vayiqra (Leviticus) 14 gives us the instructions (torah) for the cleansing of a leper. Notice how the instructions differ with regard to the two different birds.

Vayiqra (Leviticus) 14:1-8
1 Then Yahweh spoke to Moshe, saying,
2 “This shall be the torah of the leper for the day of his cleansing: He shall be brought to the priest.
3 And the priest shall go out of the camp, and the priest shall examine him; and indeed, if the leprosy is healed in the leper,
4 then the priest shall command to take for him who is to be cleansed two living and clean birds [1 & 2], cedar wood [3], scarlet [4], and hyssop [5].
5 And the priest shall command that one of the birds [1] be killed in an earthen vessel [7] over running water [6].
6 As for the living bird [2], he shall take it, the cedar wood [3] and the scarlet [4] and the hyssop [5], and dip them and the living bird [2] in the blood of the bird that was killed [1] over the running water [6].
7 And he shall sprinkle it seven times on him who is to be cleansed from the leprosy, and shall pronounce him clean, and shall let the living bird loose in the open field.
8 He who is to be cleansed shall wash his clothes, shave off all his hair, and wash himself in water, that he may be clean. After that he shall come into the camp, and shall stay outside his tent seven days.”

The components of this torah include:

In Scripture, birds represent spirits. So, if there are two spirits involved in this cleansing, let us also note that there were two Yeshua’s on trial before Pontius Pilate. One was Yeshua the son of Joseph (Yeshua ben Yosef), who is the Messiah. The other is commonly known as Barabbas.

Mattityahu (Matthew) 27:16-17
16 And at that time they had a notorious prisoner called Barabbas.
17 Therefore, when they had gathered together, Pilate said to them, “Whom do you want me to release to you? Barabbas, or Yeshua who is called Messiah?”

Barabbas is the Greek form of the Aramaic name bar Abba, which means “son of the father.” However, if we view the Greek sources of this text, we can see that bar Abba’s full name was Yeshua bar Abba (ישוע באר אבא), meaning, “Salvation, son of the Father.” (This is a screen shot of the interlinear from PC Study Bible 5.) 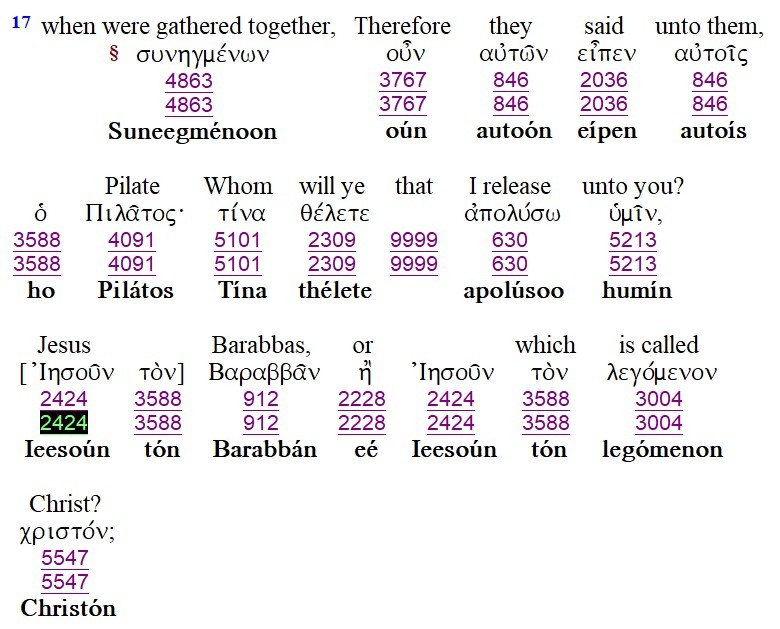 Note that NT2424 appears in both names. Strong’s Greek Concordance tells us that NT2424 refers to Yeshua’s name (Yehoshua or Yeshua for short, often incorrectly rendered as “Jesus”). (For details, please see “The Set-apart Names”, in Nazarene Scripture Studies, Volume 1).

How did this confusion occur? History records that the early Church father Origen was troubled that his copies of the Good News gave Bar Abba’s name as “Jesus Barabbas”, and he declared that it was impossible that Barabbas could have also had the name Jesus (or Yeshua). Therefore, he claimed that the name “Jesus” must have been added by a heretic. This is how Wikipedia explains it.

Barabbas’ name appears as bar-Abbas in the Greek texts of the gospels. It is derived ultimately from the Aramaic בר-אבא, Bar-abbâ, “son of the father”. Some ancient manuscripts of Matthew 27:16–17 have the full name of Barabbas as “Jesus Barabbas” and this was probably the name as originally written in the text. [13] Early church father Origen was troubled by the fact that his copies of the gospels gave Barabbas’ name as “Jesus Barabbas” and declared that since it was impossible he could have had such a holy name, “Jesus” must have been added to Barabbas’ name by a heretic. [14] It is possible that later scribes, copying the passage, removed the name “Jesus” from “Jesus Barabbas” to avoid dishonour to the name of Jesus the Messiah. [15]

However, since the oldest known manuscripts record Barabbas’ true name as Yeshua bar Abbas (or Yeshua bar Abba), let us restore that name, to see what kind of difference it makes.

So far, we have seen that to fulfill the torah of cleansing for skin affliction, two birds were required, One was to die, and the other was to fly (i.e., be released). It was the same with both Yeshua’s. Yeshua ben Yosef (the Son of the Father) was to die, while Yeshua bar Abba was to be released (i.e., to fly away free as a bird).

Let us also remember that in Scripture, birds represent spirits. Yeshua ben Yosef represented a pure and clean spirit, while Yeshua bar Abba represented a different kind of spirit. Rather than go peacefully to his death like a lamb to the slaughter, Mark tells us that Yeshua bar Abba had been involved in the rebellion, undoubtedly against Rome.

Marqaus (Mark) 15:7
7 And there was one named Barabbas, who was chained with his fellow rebels; they had committed murder in the rebellion.

This reminds of Yeshua’s rebuke of the zealots of John 6, because they had a different spirit. We cover this in Torah Government, but in brief, the zealots wanted to make Yeshua Messiah their earthly king, to lead them to throw off Rome. Thus, what the zealots had in mind was more of an earthly kingdom, than a heavenly one.

Yochanan (John) 6:14-15
14 Then those men, when they had seen the sign that Yeshua did, said, “This is truly the Prophet who is to come into the world.”
15 Therefore when Yeshua perceived that they were about to come and take Him by force to make Him king, He departed again to the mountain by Himself alone.

If Yeshua bar Abba was also involved in this rebellion, his focus was also on establishing a material kingdom, rather than a heavenly one. That is a different spirit.

So, to recap, to cleanse someone of a skin affliction (i.e., leprosy), we need the following things:

1) First, we have a death. In Matthew 27:22, Pilate asked the people what he should do with Yeshua who is called the Messiah. They all said, “Let him be crucified!”

Mattityahu (Matthew) 27:22
22 Pilate said to them, “What then shall I do with Yeshua who is called Messiah?” They all said to him, “Let Him be crucified!”

2) Second, we have a releasing of a different spirit (that seeks an earthly kingdom).

Mattityahu (Matthew) 27:26
26 Then he released Barabbas to them; and when he had scourged Yeshua, he delivered Him to be crucified.

3) Third, we have cedar wood. This hints that the tree upon which Yeshua was crucified (or put to death) was a cedar tree!

Ma’asei (Acts) 10:39
39 “And we are witnesses of all things which He did both in the land of the Jews and in Jerusalem, whom they killed by hanging on a [cedar] tree.”

4) Fourth, we have scarlet colored wool.

Mattityahu (Matthew) 27:28
28 And they stripped Him and put a scarlet robe on Him.

Yochanan (John) 19:29
29 Now a vessel full of sour wine was sitting there; and they filled a sponge with sour wine, put it on hyssop, and put it to His mouth.

6) Sixth, we have living water.

Yochanan (John) 3:5
5 Yeshua answered, “Most assuredly, I say to you, unless one is born of water and the Spirit, he cannot enter the kingdom of Elohim.”

And we also have blood and water running together:

Yochanan (John) 19:34
34 But one of the soldiers pierced His side with a spear, and immediately blood and water came out.

7) Seventh, we have an earthen vessel of clay (flesh).

Ashes for Purification of the Red Heifer

If we are willing to receive it, there may be a second witness to these things in the ashes for purification of the red heifer.

Bemidbar (Numbers) 19:1-9
1 Now Yahweh spoke to Moshe and Aharon, saying,
2 “This is the ordinance of the torah which Yahweh has commanded, saying: ‘Speak to the children of Israel, that they bring you a red heifer without blemish, in which there is no defect and on which a yoke has never come.
3 You shall give it to Eleazar the priest, that he may take it outside the camp, and it shall be slaughtered [1] before him;
4 and Eleazar the priest shall take some of its blood with his finger, and sprinkle some of its blood seven times directly in front of the tabernacle of meeting.
5 Then the heifer shall be burned in his sight: its hide, its flesh, its blood, and its offal shall be burned.
6 And the priest shall take cedar wood [3] and hyssop [5] and scarlet [4], and cast them into the midst of the fire burning the heifer.
7 Then the priest shall wash his clothes, he shall bathe in water, and afterward he shall come into the camp; the priest shall be unclean until evening.
8 And the one who burns it shall wash his clothes in water, bathe in water, and shall be unclean until evening.
9 Then a man who is clean shall gather up the ashes of the heifer, and store them outside the camp in a clean place [7, i.e., in an earthen jar]; and they shall be kept for the congregation of the children of Israel for the water [6] of purification; it is for purifying [releasing] from sin [2].”

Many believe that Yeshua was put to death at Golgotha, which is outside the walls of the old city of Jerusalem. If so, then just like the red heifer, Yeshua was also killed outside the camp. The rabbis (who preferred Barabbas and his spirit) commanded that Yeshua’s name and His memory be blotted out. Their purging of Yeshua from the camp of Judah was so effective that it was as if He and His things were burned by fire. And yet today a man who is clean can still partake of Yeshua’s Spirit outside the camp of Judah. His name and His Spirit are for purifying and releasing from sin.