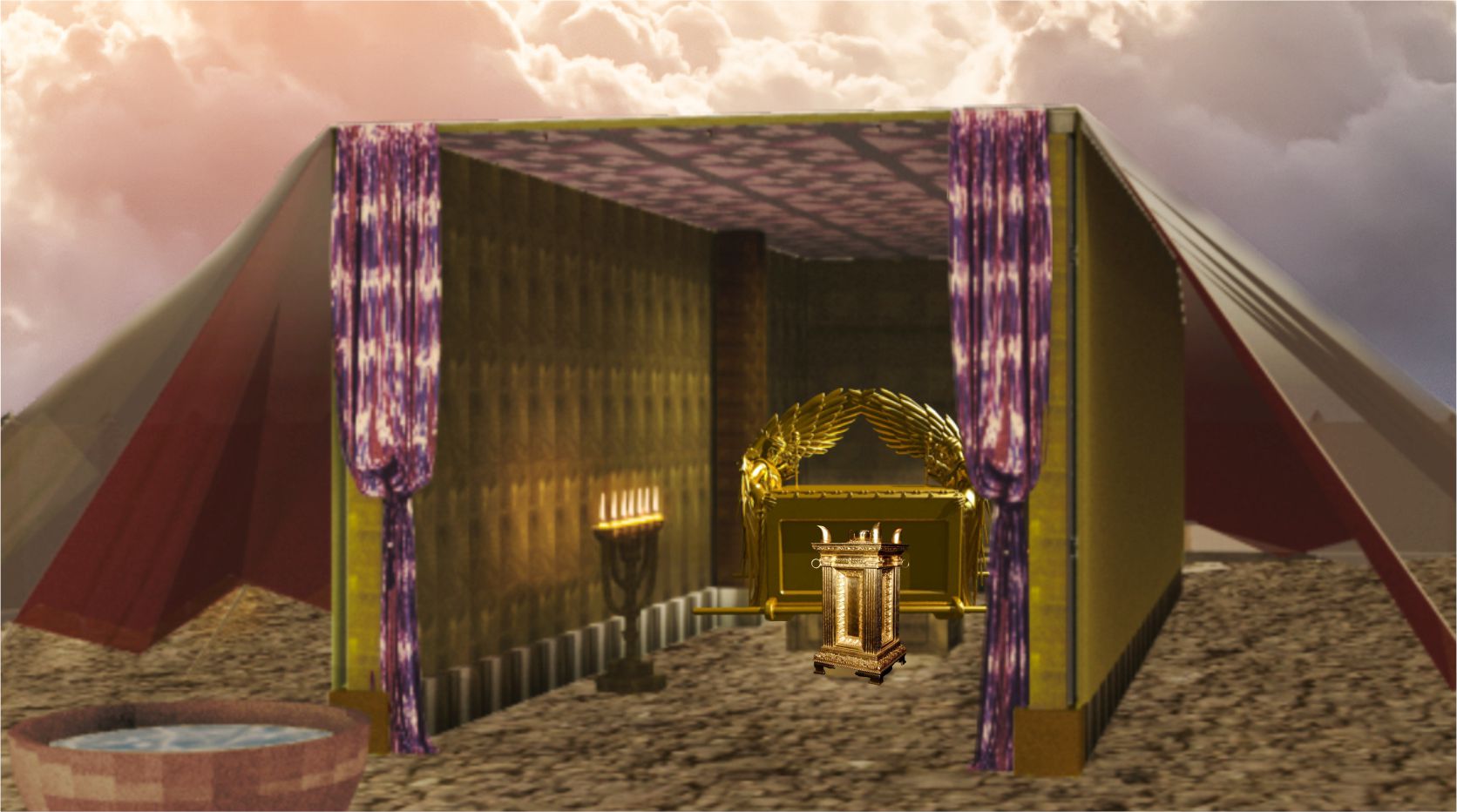 In 1 Samuel 4, the Levitical priesthood had become corrupted. Because of this, Yahweh let the Philistines capture the Ark of the Covenant in battle. When news of the ark’s capture reached the Levitical high priest Eli in Shiloh, he fell off his seat backward, and broke his neck.

Shemuel Aleph (1 Samuel) 4:17-18
17 So the messenger answered and said, “Israel has fled before the Philistines, and there has been a great slaughter among the people. Also your two sons, Hophni and Phinehas, are dead; and the ark of Elohim has been captured.”
18 Then it happened, when he made mention of the ark of Elohim, that Eli fell off the seat backward by the side of the gate; and his neck was broken and he died, for the man was old and heavy. And he had judged Israel forty years.

Yahweh plagued the Philistines because of the ark, and so they eventually sent it back. However, it never went back inside the Tabernacle of Meeting. Instead it was taken to Kiriath-Jearim, where it remained in the house of Avinadav (Abinadab) for perhaps 20 years.

Shemuel Aleph (1 Samuel) 7:1-2
1 Then the men of Kirjath Jearim came and took the ark of Yahweh, and brought it into the house of Abinadab on the hill, and consecrated Eleazar his son to keep the ark of Yahweh.
2 So it was that the ark remained in Kirjath Jearim a long time; it was there twenty years. And all the house of Israel lamented after Yahweh.

Both the ark and the Tent of Meeting were designed to be able to travel, and Yahweh had commanded them to move separately before (as in the conquest of Jericho, Joshua 6:4). However, after the death of Eli they were separated a long time. There is a lot of conjecture about the exact travels of the Tent of Meeting and the ark, but we do know that at one point the Tent of Meeting had relocated to Nob, because this is where David asked Ahimelech for the day-old showbread.

Shemuel Aleph (1 Samuel) 21:1-3
1 Now David came to Nob, to Ahimelech the priest. And Ahimelech was afraid when he met David, and said to him, “Why are you alone, and no one is with you?”
2 So David said to Ahimelech the priest, “The king has ordered me on some business, and said to me, ‘Do not let anyone know anything about the business on which I send you, or what I have commanded you.’ And I have directed my young men to such and such a place.
3 Now therefore, what have you on hand? Give me five loaves of bread in my hand, or whatever can be found.”

Later the Tent of Meeting moved to Gibeon, which was closer to King Shaul’s home in Gibeah (north of Jerusalem). The regular burnt offerings continued to be offered there, even though the Ark of the Covenant was most likely no longer inside.

Divre HaYamim Aleph (1 Chronicles) 16:39-40
39 and Zadok the priest and his brethren the priests, before the tabernacle of Yahweh at the high place that was at Gibeon,
40 to offer burnt offerings to Yahweh on the altar of burnt offering regularly morning and evening, and to do according to all that is written in the Torah of Yahweh which He commanded Israel…

Then when David was made king and won Jerusalem in battle, he thought to bring the ark closer to his new home in Jerusalem. He called thirty thousand choice men of Israel to move it, but they did not realize that the ark was only to be carried by the Levites (Exodus 25:14). That is why, when the oxen stumbled and Uzzah went to steady the ark, Yahweh struck Uzzah, and he died.

Shemuel Bet (2 Samuel) 6:1-11
1 Again David gathered all the choice men of Israel, thirty thousand.
2 And David arose and went with all the people who were with him from Baale Judah to bring up from there the ark of Elohim, whose name is called by the Name, Yahweh of Hosts, who dwells between the cherubim.
3 So they set the ark of Elohim on a new cart, and brought it out of the house of Abinadab, which was on the hill; and Uzzah and Ahio, the sons of Abinadab, drove the new cart.
4 And they brought it out of the house of Abinadab, which was on the hill, accompanying the ark of Elohim; and Ahio went before the ark.
5 Then David and all the house of Israel played music before Yahweh on all kinds of instruments of fir wood, on harps, on stringed instruments, on tambourines, on sistrums, and on cymbals.
6 And when they came to Nachon’s threshing floor, Uzzah put out his hand to the ark of Elohim and took hold of it, for the oxen stumbled.
7 Then the anger of Yahweh was aroused against Uzzah, and Elohim struck him there for his error; and he died there by the ark of Elohim.
8 And David became angry because of Yahweh’s outbreak against Uzzah; and he called the name of the place Perez Uzzah to this day.
9 David was afraid of Yahweh that day; and he said, “How can the ark of Yahweh come to me?”
10 So David would not move the ark of Yahweh with him into the City of David; but David took it aside into the house of Obed-Edom the Gittite.
11 The ark of Yahweh remained in the house of Obed-Edom the Gittite three months. And Yahweh blessed Obed-Edom and all his household.

Perhaps King David wondered if it had been a bad idea to move the ark, and so it was quickly parked in the house of Obed-Edom, the Gittite. However, when Obed-Edom was blessed by it, perhaps King David realized that the only problem had been that it had not been carried by the Levites. Therefore, King David arranged for the Levites to carry it, and he tried again. But notice that King David (who was of the tribe of Judah) wore a linen ephod, which is only for priests to wear.

Shemuel Bet (2 Samuel) 6:12-15
12 Now it was told King David, saying, “Yahweh has blessed the house of Obed-Edom and all that belongs to him, because of the ark of Elohim.” So David went and brought up the ark of Elohim from the house of Obed-Edom to the City of David with gladness.
13 And so it was, when those bearing the ark of Yahweh had gone six paces, that he sacrificed oxen and fatted sheep.
14 Then David danced before Yahweh with all his might; and David was wearing a linen ephod.
15 So David and all the house of Israel brought up the ark of Yahweh with shouting and with the sound of the trumpet.

Tehillim (Psalms) 110:4
4 Yahweh has sworn And will not relent, “You are a priest forever According to the order of Melchizedek.”

We should note well that King David did not have the ark put in the Tent of Meeting, but in a new and special tent that King David erected for it, which was called the Tabernacle of David.

Shemuel Bet (2 Samuel) 6:17
17 So they brought the ark of Yahweh, and set it in its place in the midst of the tabernacle that David had erected for it. Then David offered burnt offerings and peace offerings before Yahweh.

Most translations of 2 Samuel 8:15-18 tell us that David’s sons were “chief rulers” or “chief ministers” in the Tabernacle of David, but in Hebrew it says plainly that David’s sons (like David) were priests (cohenim, כֹּהֲנִים).

Shemuel Bet (2 Samuel) 8:15-18
15 So David reigned over all Israel; and David administered judgment and justice to all his people.
16 Joab the son of Zeruiah was over the army; Jehoshaphat the son of Ahilud was recorder;
17 Zadok the son of Ahitub and Ahimelech the son of Abiathar were the priests; Seraiah was the scribe;
18 Benaiah the son of Jehoiada was over both the Cherethites and the Pelethites; and David’s sons were cohenim [כֹּהֲנִים].

The progression is fascinating. First there was Shemuel, the Levitical priest and anointed judge from the territory of Ephraim, who was called an Ephraimite. He anointed King David with a Melchizedekian anointing. King David then passed this Melchizedekian anointing to his sons, who also served as cohenim (whether priests, rulers, or ministers), even though they were of the tribe of Judah. Then many years later, Yeshua the Messiah would also select other Jews to become Melchizedekian priests in the Tabernacle of David, which He was restoring by His Spirit. Then He would choose a Benjamite (Shaul), and some Hellenized Jews (Timothy), and ultimately even gentiles would be called to serve in this Melchizedekian order. And together over many years, and even through a Great Falling Away, they would take the Good News of the Kingdom of Elohim to the lost sheep of the house of Israel (Ephraim).

In the next chapter we will see what the Tabernacle of David was like, and why its Torah is so unlike the Torah of the Levitical order.