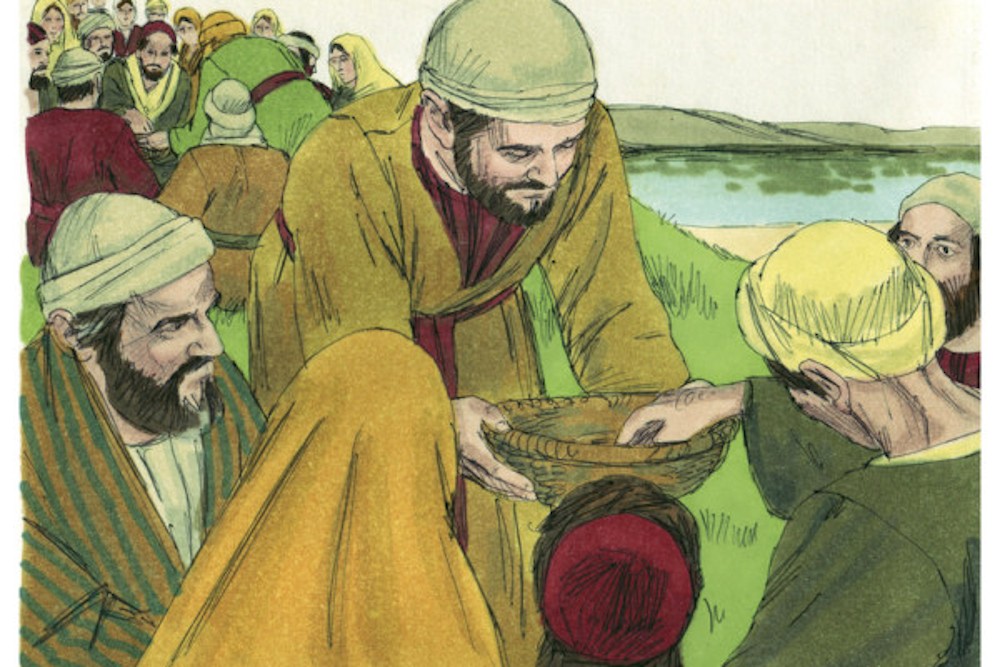 Imagine it is the first century, and that you are one of the twelve disciples. You have gladly laid down your life in exchange for the privilege of helping Yeshua further His kingdom in any way that you can.

About 5,000 people have come to see Yeshua. Many of them have probably walked for days. Yeshua has shown compassion by healing them and teaching them. Now He is performing a miracle to feed them all. Because He is training you to be a priest in His absence, He tells you to serve the people the bread He multiplies, and gather up all the fragments.

Yochanan (John) 6:1-13
1 After these things Yeshua went over the Sea of Galilee, which is the Sea of Tiberias.
2 Then a great multitude followed Him, because they saw His signs which He performed on those who were diseased.
3 And Yeshua went up on the mountain, and there He sat with His disciples.
4 Now the Passover, a feast of the Jews, was near.
5 Then Yeshua lifted up His eyes, and seeing a great multitude coming toward Him, He said to Philip, “Where shall we buy bread, that these may eat?”
6 But this He said to test him, for He Himself knew what He would do.
7 Philip answered Him, “Two hundred denarii worth of bread is not sufficient for them, that every one of them may have a little.”
8 One of His disciples, Andrew, Simon Peter’s brother, said to Him,
9 “There is a lad here who has five barley loaves and two small fish, but what are they among so many?”
10 Then Yeshua said, “Make the people sit down.” Now there was much grass in the place. So the men sat down, in number about five thousand.
11 And Yeshua took the loaves, and when He had given thanks He distributed them to the disciples, and the disciples to those sitting down; and likewise of the fish, as much as they wanted.
12 So when they were filled, He said to His disciples, “Gather up the fragments that remain, so that nothing is lost.”
13 Therefore they gathered them up, and filled twelve baskets with the fragments of the five barley loaves which were left over by those who had eaten.

When the people see this, they declare that Yeshua is truly the Prophet who is to come into the world (Deuteronomy 18). They also decide they will take Him by force and make Him king, so He can lead an uprising against the Romans. However, Yeshua pulls away, because that is not His Father’s plan.

Yochanan (John) 6:14-15
14 Then those men, when they had seen the sign that Yeshua did, said, “This is truly the Prophet who is to come into the world.”
15 Therefore when Yeshua perceived that they were about to come and take Him by force to make Him king, He departed again to the mountain by Himself alone.

At evening, you cross the Sea of Galilee along with the other disciples. The next day, the believers who want to force Yeshua to be king, come across the lake seeking Him. They are very zealous, having walked for days to see Him, and then having crossed the sea, so we will call this group of believers the zealots. (In fact, the zealots of the Renewed Covenant were such a group who wanted to overthrow the Romans by military force.)

When the zealots catch up with Yeshua, He speaks to them only in parables. He tells them that they do not seek Him because they saw the signs, but because they ate of the loaves and were filled.

Yochanan (John) 6:24-26
24 when the people therefore saw that Yeshua was not there, nor His disciples, they also got into boats and came to Capernaum, seeking Yeshua.
25 And when they found Him on the other side of the sea, they said to Him, “Rabbi, when did You come here?”
26 Yeshua answered them and said, “Truly, truly, I say to you, you seek Me, not because you saw the signs, but because you ate of the loaves and were filled.”

Although the zealots saw the signs that Yeshua did, they do not want to lay down their lives and help Him further His kingdom (as you are doing). Rather, they seek to set Him up as an earthly king (over their own earthly kingdom) in the hope that He will overthrow the Romans—perhaps so they can all live comfortable lives. Their minds are not set on the things of Elohim, but only on the things of men; therefore, Yeshua speaks to them in parables, telling them not to labor for food which perishes, but for food which endures to everlasting life.

The zealots realize Yeshua is saying they are working the works of man, so they ask Him what they should do that they might work the works of Elohim—but He continues to answer them only in parables.

Yeshua’s meaning is simple, but the believers don’t get it. They ask Him what sign He will perform so they will believe (which is odd because they saw Him perform signs on the other side of the sea). In response, Yeshua speaks yet another parable, about the need to partake of the true bread.

Yochanan (John) 6:30-35
30 Therefore they said to Him, “What sign will You perform then, that we may see it and believe You? What work will You do?
31 Our fathers ate the manna in the desert; as it is written, ‘He gave them bread from heaven to eat.'”
32 Then Yeshua said to them, “Most assuredly, I say to you, Moshe did not give you the bread from heaven, but My Father gives you the true bread from heaven.
33 For the bread of Elohim is He who comes down from heaven and gives life to the world.”
34 Then they said to Him, “Adon, give us this bread always.”
35 And Yeshua said to them, “I am the bread of life. He who comes to Me shall never hunger, and he who believes in Me shall never thirst.”

Although we are to become like Yeshua, this is not the ultimate goal. The ultimate goal of the faith is to imitate Yeshua until we all become Yeshua’s body, operating as one. It can sometimes take a while to grasp this concept fully, but let us grasp it, because it is the essence of sanctification.

If we are Yeshua’s hands and His feet, then we are busy building His kingdom, whether we work full-time as priests, or part-time as volunteer disciples (like Mnason and Joseph of Arimathea). However, if we are not busy building His kingdom, then we are not His hands and His feet (i.e., we are not His body, no matter what else we might think). That is why Yeshua told the zealots that they had seen Him (and had crossed the lake to make Him their king), but they still did not truly believe. They did not join with Him.

This point cannot be overemphasized. If we are not actively working in some capacity to further His kingdom, then we do not truly believe—and therefore we are not part of His body, even if we belong to some form of spiritual organization (i.e., a church or Messianic fellowship).