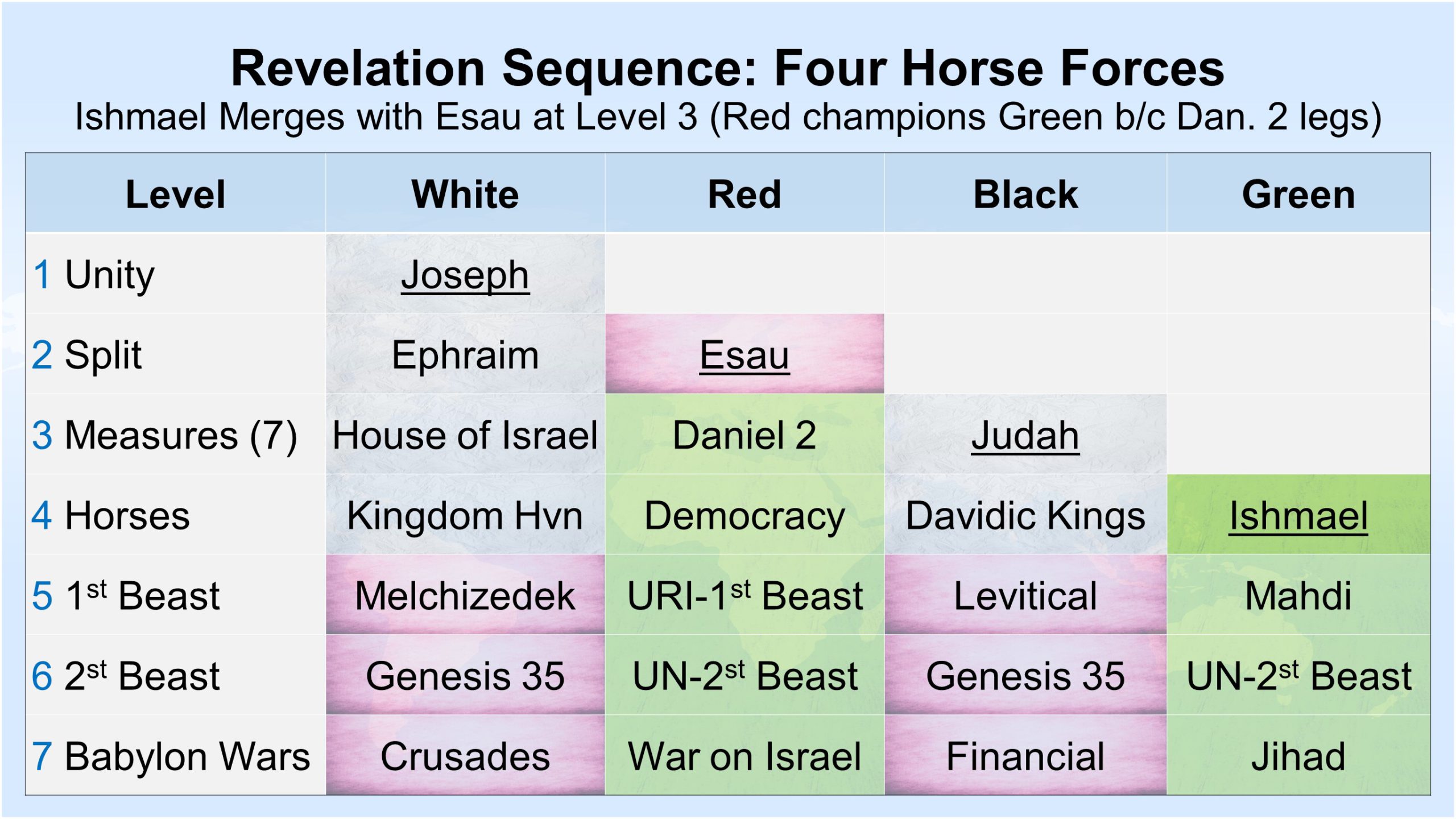 Zecharyah (Zechariah) 6:1-6
1 Then I turned and raised my eyes and looked, and behold, four chariots were coming from between two mountains, and the mountains were mountains of bronze.
2 With the first chariot were red horses [Esau], with the second chariot black horses [Judah],
3 with the third chariot white horses [Joseph/Ephraim], and with the fourth chariot dappled horses [Ishmael] — strong steeds.
4 Then I answered and said to the angel who talked with me, “What are these, my adon?”
5 And the messenger answered and said to me, “These are four spirits of heaven, who go out from their station before the Adon of all the earth.
6 The one with the black horses [Judah] is going to the north country [Judeo-Christian Europe], the white [Joseph] are going after them, and the dappled [Ishmael] are going toward the south country [Saudi Arabia and Africa].”

Verse 5 tells us that the four horses represent four spirits of heaven, which have gone out from their station before the Adon of the whole earth. This means they all have a righteous place before Yahweh, and that they serve Yahweh.

When secular men try to be spiritual, they often embrace concepts like communism, socialism, and democracy. These ideas are based on the thought that “all men are created equal,” and that “all men are brothers,” since they all have red blood. This attitude is very prevalent inside the Esau-Roman Church system, and the Western democracies which spring from it.

As we show in Torah Government, after the days of Avraham, Yitzhak, and Yaakov, the tribes were no longer unified by a single living patriarch. Over time they came to be unified by the Israelite kings, according to the rule of law. Such kingship is represented by the black horse. And, because Judah is the kingship tribe, the black horse also represents Judah.

Third comes the white horse, which represents spiritual purity, and pure love of Elohim. Before Yeshua’s advent, Israel did serve Elohim, but we don’t see the same kind of selfless sacrifice to Yahweh as after Yeshua’s advent, which we will explore in a moment.

The green (or pale) horse of Revelation first appears as the dappled (grizzled) horses of Zechariah. The dappled horses refer to Ishmael. Ishmael governs himself not by Torah, but by Sharia law, which operates on the principle of judgment, and punishment. These things do have a place in Yahweh’s kingdom (although that place is last).

Israel loved Yahweh before Yeshua, but the nature of the love and service was different. First, to be Israelite generally required Israelite blood (red horse). The nation also went out to war behind their king (black horse). However, after Yeshua’s sacrifice, the disciples would take the Good News to all nations, regardless of (red horse) tribe or tongue or nation. They also took the message to every family and every clan, regardless of who their (black horse) king was.

And while there is still a place for green horse judgment in Yeshua’s kingdom, it still comes in last place.

Yaakov (James) 2:13
13 For judgment is without mercy to the one who has shown no mercy. Mercy triumphs over judgment.

It can be easy for those of us in the Nazarene Israel and Ephraimite movements to dismiss the role of the red horse because it is not in the first place, and also due to the fact that the red horse is used to generate war and death. However we need to remember that it is Yahweh who has sent it out from its place (verse 4).

Hitgalut (Revelation) 6:3-4
3 When He opened the second seal, I heard the second living creature saying, “Come and see.”
4 Another horse, fiery red, went out. And it was granted to the one who sat on it to take peace from the earth, and that people should kill one another; and there was given to him a great sword.

Since the red horse has gone out from its place, it has generated death and conflict all around the world. Many Ephraimites living in capitalistic (black horse controlled) red horse democracies (such as the United States) often revile the red horse and its secular manifestations (such as communism and socialism). However, we need to remember that the red horse is from Yahweh, and that it plays an important role in the Renewed Covenant order.

Left to its own devices, pure capitalism will eventually consume the poor, the widow, and the orphan, because earth’s resources are ultimately limited, and capitalists will seek to take all they can, without concern for anyone else. And that may be the reason that while Yahweh’s system employs capitalism for 12 of the 13 tribes, He also commands us to take care of the poor, and to provide for them as a nation.

Vayiqra (Leviticus) 25:35-39
35 ‘If one of your brethren becomes poor, and falls into poverty among you, then you shall help him, like a stranger or a sojourner, that he may live with you.
36 Take no usury or interest from him; but fear your Elohim, that your brother may live with you.
37 You shall not lend him your money for usury, nor lend him your food at a profit.
38 I am Yahweh your Elohim, who brought you out of the land of Egypt, to give you the land of Canaan and to be your Elohim.
39 ‘And if one of your brethren who dwells by you becomes poor, and sells himself to you, you shall not compel him to serve as a slave.”

After the Ephraimites conquered the United States and took its lands from the natives, there was a lot of land, and it was inexpensive to acquire. Anyone with an able body who was willing to work could do well financially. Because of this, many in Ephraim learned to despise social programs of all kinds. Yet ironically, because of unbridled capitalism, this situation is changing. Today we see the richest 1% getting ever richer, while the poor get ever poorer. This is reaching to the point that there are many poor and homeless even in the streets of the United States. This is the result of unbridled capitalism, and Yahweh is clear that He will not let it go unpunished.

In Revelation and the End Times, in “America, Land of Babylon” we show how the United States is the Land of Babylon of Jeremiah chapters 47, 50, and 51. Yahweh tells us that the capitalistic system in Babylon (i.e., the USA) lays its yoke very heavily upon the elderly (and on the poor, the widow, and the orphan). Yahweh views this as an evil hardness of heart. He tells us that the latter end of this kind of spiritual hard-heartedness will be utter destruction.

Yeshayahu (Isaiah) 47:5-7
5 “Sit in silence, and go into darkness, O daughter of the Chaldeans; For you shall no longer be called The Lady of Kingdoms.
6 I was angry with My people; I have profaned My inheritance, And given them into your hand. You showed them no mercy; On the elderly you laid your yoke very heavily. “
7 And you said, ‘I shall be a lady forever,’ So that you did not take these things to heart, Nor remember the latter end of them [i.e., destruction].”

Some Ephraimites try to excuse themselves from taking these matters to heart by pointing out that in the Tanach (“Old” Covenant), the rule was that those who worked hard and served Yahweh were blessed with material wealth.

B’reisheet (Genesis) 13:2
2 Avram was very rich in livestock, in silver, and in gold.

Clearly, diligence and hard work can still lead to great material wealth. This is shown by the fact that black horse Judah (who still follows the old order) has far more material wealth than most Ephraimites do. Yet after Yeshua’s coming, in the new order (with the white horse in front), the emphasis is different. Rather than exalting material wealth, Yeshua says it is the poor who are blessed.

Luqa (Luke) 6:20
20 Then He lifted up His eyes toward His disciples, and said: “Blessed are you poor, For yours is the kingdom of Elohim.”

This is not to advocate the kind of poverty that comes from laziness, foolishness, or lack of diligence. Rather, what we need to realize is that those who sit in the (black horse) kingship offices are also the ones who wear the fine clothing, and have an abundance of wealth.

Mattityahu (Matthew) 11:8
8 “But what did you go out to see? A man clothed in soft garments? Indeed, those who wear soft clothing are in kings’ houses.”

Today also, many of those kingship offices are held by our black horse Orthodox brethren. Let us therefore consider how the disciples also say that the righteous poor who serve are more blessed that those who oppress the righteous in their pursuit of mammon.

Yaakov (James) 2:5-10
5 Listen, my beloved brethren: Has Elohim not chosen the poor of this world to be rich in faith and heirs of the kingdom which He promised to those who love Him?
6 But you have dishonored the poor man. Do not the rich oppress you and drag you into the courts?
7 Do they not blaspheme that noble name by which you are called?
8 If you really fulfill the royal law according to the Scripture [by taking care of the poor], “You shall love your neighbor as yourself,” you do well;
9 but if you show partiality, you commit sin, and are convicted by the law as transgressors.
10 For whoever shall keep the whole Torah, and yet stumble in one point, he is guilty of all.

In context, Yaakov tells us that if we fail to take care of the poor, we are guilty of breaking the whole Torah. If we wish to survive the coming tribulation, we need to avoid that. Rather, we need to provide for them by doing our part with the third tithe.

THE THIRD TITHE AND THE PRIESTHOOD

While secular socialism and communism lead to great destruction and death, we should never forget that the red horse occupies the #2 role in Yeshua’s kingdom (second only to the white horse). After Yeshua, the red horse is ahead of both the black or green horses, which means that fraternal ideals between believers are more important to Yahweh than either black horse wealth, or green horse judgment. This is because the white horse represents the love and service of Yahweh Elohim, while the red horse represents love for our brothers. These are the two main underpinnings of the Torah.

While secular communism and secular socialism lead to war and death, obeying Yeshua’s Great Commission and taking care of our poor lead to eternal life. This is because the Great Commission is a true manifestation of white horse love for Elohim, while taking care of our poor with the third tithe is a true manifestation of red horse love for our brethren. It is only after we obey these two things that we should concern ourselves with black horse wealth for ourselves, and apply green horse judgment within the body.

In Torah Government we show how there are specific rules for these things, which Elohim expects us to follow. As we proceed forward into these end times, let us approach these matters in all seriousness, for not only our physical lives depend on it, but also our spiritual lives.