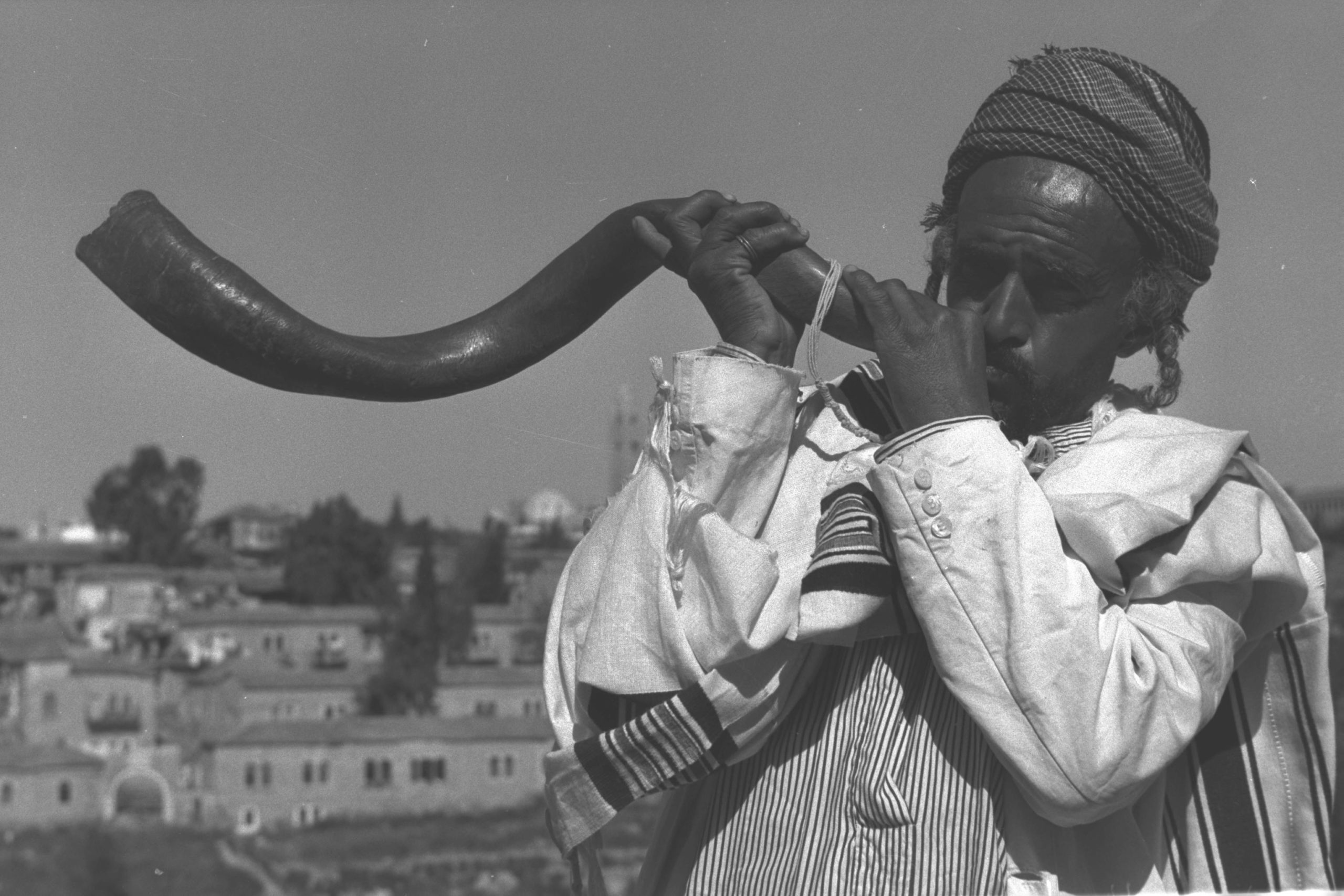 The declaration of the Head of the Year establishes the timing of all the Feasts of the first month, including Passover, the Feast of Unleavened Bread, the Wave Sheaf and even the Pentecost. All of these feast dates can be determined just as soon as the Head of the Year is known. However, until the first crescent sliver of the new moon of the seventh month has been physically sighted the dates of the Feasts of the seventh month cannot be known, because Yahweh is ultimately in control of the weather.

The New Moon Day of the seventh month is called ‘Yom Teruah’ (יוֹם תְּרוּעָה). This is oftentimes translated as the ‘Day of Trumpets’, although it actually translates more like the ‘Day of Blowing,’ or the ‘Day of Shouting.’ Strong’s Concordance tells us that the word ‘Teruah’ (תְּרוּעָה) refers to an acclamation of joy, especially of trumpets, and also as a cry of battle, or an alarm.

When we look up the reference to OT:7321, we find that the idea is one of ‘splitting the ears’ with sound, particularly with shouts of joy or alarm.

In this light, let us consider Numbers 10:8-9, which tells us that whenever Israel went out to battle, the priests would blow the silver trumpets (חֲצֹצְרוֹת), sounding an alarm so that Yahweh would remember Israel, and save her from her enemies.

Israel was also commanded to blow the silver trumpets in their appointed feasts, in the beginnings of their months, over the sacrifices of their peace offerings and in their ‘day of gladness.’ Scholars differ as to whether this ‘day of gladness’ is a reference to the Sabbath, the Feast of Tabernacles, or some other day.

But if we are commanded to blow the silver trumpets at the beginning of each of our months, then what makes Yom Teruah any different from any other new moon day? One thing that sets it apart is how Israel is not supposed to work on that day, but is commanded to have a set-apart day of rest.

In the next five verses, Yahweh prescribes the offerings we are to bring Him on this day.

Some liken Yahweh’s offerings to an outdoor barbecue, and a barbecue always smells good to the human nose. However, since Yahweh is Spirit, could it be that the reason He says these things are a ‘sweet aroma’ is that it pleases Him whenever we willingly give up what we want, in order to follow His word?

Leviticus 23 confirms that we are to observe Yom Teruah as a set-apart memorial of blowing, and to bring Him an offering made by fire.

But what is the deeper significance of Yom Teruah? Yom Teruah is sometimes called ‘the feast of which no man knows the day or the hour’ because, like the Head of the Year, we cannot know in advance the day or the hour it will begin. Rather, we must wait until Yahweh shows us the first crescent sliver of His new moon.

As we will see in the chapters that follow, Yeshua was probably conceived during the Feast of Hanukkah, and was likely born on the first day of the Feast of Tabernacles. We have already seen that He was put to death in fulfillment of the Passover, and that He also fulfilled the Days of Unleavened Bread, the Omer, and the Pentecost. In like fashion, many scholars believe Yeshua will return in fulfillment of the Day of Trumpets, because just as no man knows the day or the hour of the Day of Trumpets before the first crescent sliver of the new moon is physically seen, Yeshua tells us that no man knows the day or the hour in which He will physically return, either.

Mattityahu (Matthew) 24:29-32
29 “Immediately after the tribulation of those days the sun will be darkened, and the moon will not give its light; the stars will fall from heaven, and the powers of the heavens will be shaken.
30 Then the sign of the Son of Man will appear in heaven, and then all the tribes of the earth will mourn, and they will see the Son of Man coming on the clouds of heaven with power and great glory.
31 And He will send His angels with a great sound of a trumpet, and they will gather together His elect from the four winds, from one end of heaven to the other.
32 “Now learn this parable from the fig tree: When its branch has already become tender and puts forth leaves, you know that summer is near.

In the Parable of the Fig Tree, Yeshua seems to tell us that we can know the general season of His return in advance, yet we cannot know the exact time. This is in the same way as we can know when the feasts of the seventh month are approaching, but still we must wait for Yahweh to show us the first crescent sliver of the new moon.

We are to know the general time when the Son of Man will appear, yet we cannot know the exact hour of His appearance until He actually arrives. Therefore, we are to be alert, wait, and watch.

Mattityahu (Matthew) 25:1-13
1 “Then the kingdom of heaven shall be likened to ten virgins who took their lamps and went out to meet the bridegroom.
2 Now five of them were wise, and five were foolish.
3 Those who were foolish took their lamps and took no oil with them,
4 but the wise took oil in their vessels with their lamps.
5 But while the bridegroom was delayed, they all slumbered and slept.
6 “And at midnight a cry was heard: ‘Behold, the bridegroom is coming; go out to meet him!’
7 Then all those virgins arose and trimmed their lamps.
8 And the foolish said to the wise, ‘Give us some of your oil, for our lamps are going out.’
9 But the wise answered, saying, ‘No, lest there should not be enough for us and you; but go rather to those who sell, and buy for yourselves.’
10 And while they went to buy, the bridegroom came, and those who were ready went in with him to the wedding; and the door was shut.
11 “Afterward the other virgins came also, saying, ‘Master! Master! Open to us!’
12 But he answered and said, ‘Assuredly, I say to you, I do not know you.’
13 “Watch therefore, for you know neither the day nor the hour in which the Son of Man is coming.

Judaism teaches that the ten days beginning with Yom Teruah and ending with Yom Kippur (the Day of Atonement) are called the ‘Ten Days of Awe.’ The last service on Yom Kippur is called ‘Neilah’, which means, literally, ‘locked’, the concept being that Yahweh locks the doors of heaven against us at that time, if we have not already repented and entered into His kingdom.

Qorintim Aleph (1st Cor.) 15:50-52
50 Now this I say, brethren, that flesh and blood cannot inherit the kingdom of Elohim; nor does corruption inherit incorruption.
51 Behold, I tell you a mystery: We shall not all sleep, but we shall all be changed —
52 in a moment, in the twinkling of an eye, at the last trumpet. For the trumpet will sound, and the dead will be raised incorruptible, and we shall be changed.

Many scholars believe that this passage in First Corinthians implies that Yeshua will return on Yom Teruah, since we will be changed at His coming, which will occur at the last trumpet.

Trumpets are also mentioned many other places in Scripture, and trumpets are usually associated with judgment and the final redemption. This is consistent with the theme of the feasts of the seventh month in general.

Nehemiah 8:2-3 shows us how Ezra assembled the people on the first day of the seventh month.

Nehemiah 8:2-3
2 So Ezra the priest brought the Torah before the assembly of men and women and all who could hear with understanding on the first day of the seventh month.
3 Then he read from it in the open square that was in front of the Water Gate from morning until midday, before the men and women and those who could understand; and the ears of all the people were attentive to the Book of the Torah.

Nehemiah 8:13
13 Now on the second day the heads of the fathers’ houses of all the people, with the priests and Levites, were gathered to Ezra the scribe, in order to understand the words of the Torah.

The rabbis today celebrate Rosh HaShanah on the first two days of the seventh month, identical with how Ezra the priest did so.

There are many other rabbinical customs surrounding Yom Teruah which we will not attempt to explore here.