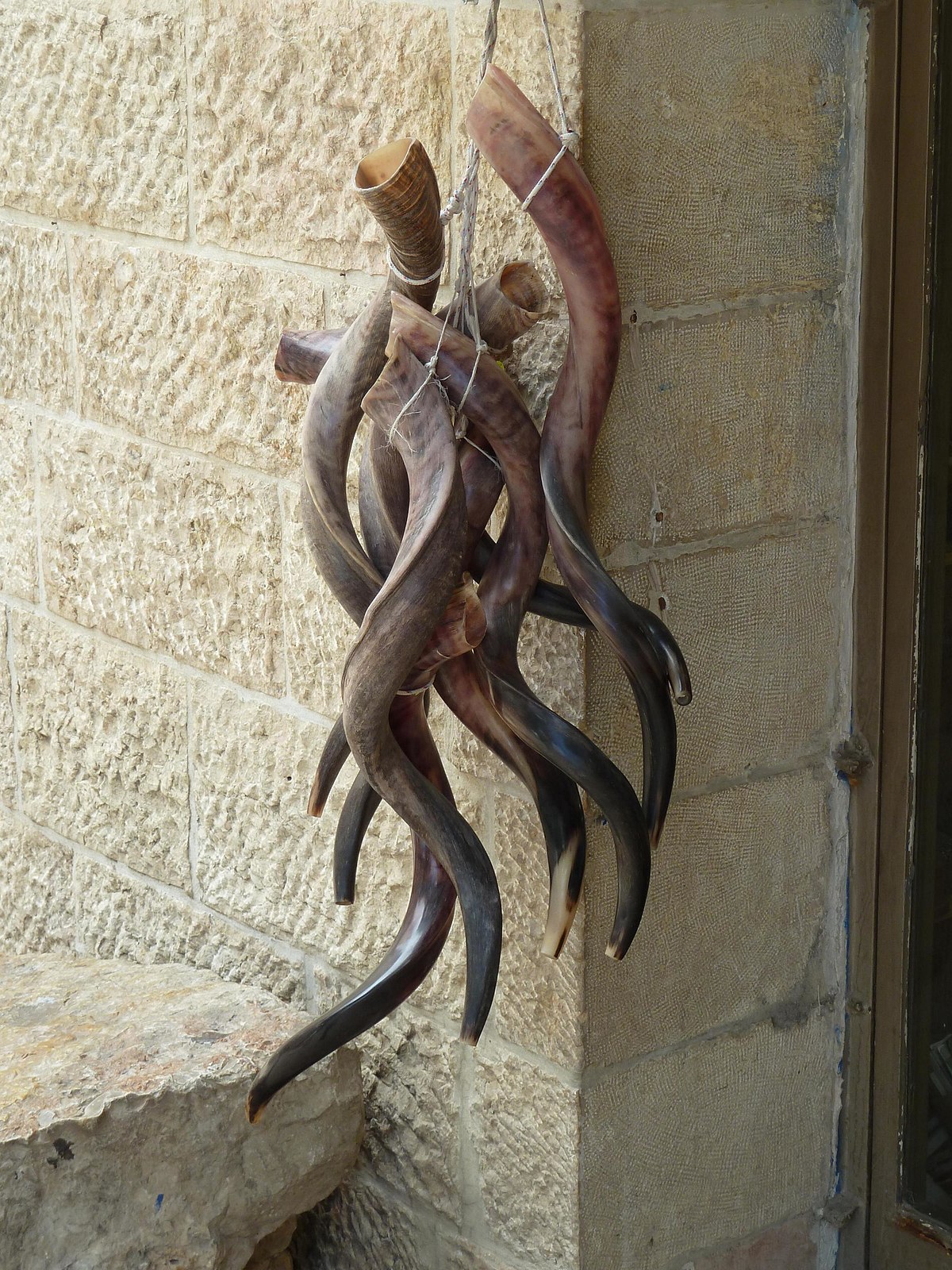 Earlier we showed why there will likely be an engineered nuclear war at seal 6. The purpose of this war is to convince people to support a one world order (and a one world religion), in order to avert further nuclear war.

Revelation 8:1 tells us that when seal 7 is opened, there will be silence in heaven for about half an hour.

Hitgalut (Revelation) 8:1
1 When He opened the seventh seal, there was silence in heaven for about half an hour.

How long is a prophetic half hour? There are three possibilities. One is that it will be a literal half hour. This is highly unlikely because the nuclear fallout will not even have settled in that amount of time. Another possibility is to apply the principle Yahweh used with Ezekiel, that a prophetic day represents a year.

Yehezqel (Ezekiel) 4:6
6 “And when you have completed them, lie again on your right side; then you shall bear the iniquity of the house of Judah forty days. I have laid on you a day for each year.”

Since there are 24 hours in a day, there are 48 half hours. If we divide 365 days by 48, we find that this scenario works out to only 7.6 days. That is not enough time for the fallout to settle, let alone time to set up a global government with a consolidated hold on power.

It seems wiser to apply the principle that Kepha (Peter) spoke of, that a prophetic day can equal 1,000 years.

According to this principle, when we divide 1,000 years by 48 half hours, we get 21.667 years. Given 21 years, it is reasonable to believe that a one world government could set up, consolidate its hold on power, and also indoctrinate a new generation of children to believe that there cannot help but be more nuclear war without a new world order and a one world religion to enforce peace. Thus anyone who is not an atheist, or who believes something other than the one world religion, would be considered a threat to world peace. If a new generation of children is raised with this belief, it would make it much easier for a new world order to persecute the believers during the time of Jacob’s Trouble (the second half of the tribulation).

During the half hour of silence, seven messengers will be given seven trumpets. Then another messenger will throw a censer to the earth, and there will be noise, thundering, lightning, and an earthquake (another societal shake-up).

Hitgalut (Revelation) 8:2-6
2 And I saw the seven messengers who stand before Elohim, and to them were given seven trumpets.
3 Then another messenger, having a golden censer, came and stood at the altar. He was given much incense, that he should offer it with the prayers of all the saints upon the golden altar which was before the throne.
4 And the smoke of the incense, with the prayers of the saints, ascended before Elohim from the messenger’s hand.
5 Then the messenger took the censer, filled it with fire from the altar, and threw it to the earth. And there were noises, thunderings, lightnings, and an earthquake.
6 So the seven messengers who had the seven trumpets prepared themselves to sound.

At trumpet 1, there is hail and fire mingled with blood. A third of all trees are burned up, and a third of all green grass is burned up.

Hitgalut (Revelation) 8:7
7 The first messenger sounded: And hail and fire followed, mingled with blood, and they were thrown to the earth. And a third of the trees were burned up, and all green grass was burned up.

The Peshitta reads “hail and fire mingled with water.” Some believe this refers to a comet hitting the earth, as most comets are made of ice and rocks. However, this remains to be seen. Because Revelation is a vision, a spiritual fulfillment seems more likely.

We should also realize that the frame of reference in Scripture is not typically the whole world, but the Middle East. Thus, when Scripture says that a third of the trees were burned up, this may refer to all the trees on planet earth, or it may be an event that affects only the Middle East (and particularly the land of Israel).

At trumpet 2, something like a great mountain burning with fire is thrown into the sea.

Since the frame of reference is the Middle East, some believe this will be fulfilled by a comet (or meteorite) landing in the Mediterranean. While this is possible, Revelation is better understood at the symbolic level. Therefore, let us look at Psalms 46:2 and 46:6, which liken mountains to kingdoms (i.e., governments).

Tehillim (Psalms) 46:2, 6
2 Therefore we will not fear, Even though the earth be removed, And though the mountains be carried into the midst of the sea…
6 The nations raged, the kingdoms were moved; He uttered His voice, the earth melted.

Revelation 17:15 also tells us that water can represent peoples, multitudes, nations, and tongues.

Hitgalut (Revelation) 17:15
15 Then he said to me, “The waters which you saw, where the harlot sits, are peoples, multitudes, nations, and tongues.”

Revelation speaks of a time of tremendous societal upheaval. If mountains represent governments, and water represents people, then when something like a great mountain is cast into the sea, it might mean that a great government will collapse (and perhaps a third of the people will be hurt).

At trumpet 3, a great star from heaven, burning like a torch, falls on a third of the rivers and springs. The name of this star is called “Wormwood.” It makes the waters bitter, so that many men die from the water.

Hitgalut (Revelation) 8:10-11
10 Then the third messenger sounded: And a great star fell from heaven, burning like a torch, and it fell on a third of the rivers and on the springs of water.
11 The name of the star is Wormwood. A third of the waters became wormwood, and many men died from the water, because it was made bitter.

This could refer to a literal star that falls from heaven, and makes a third of the literal waters bitter. However, because Revelation is a vision, what makes more sense is that the rivers and springs of water refer to the Christian church doctrines, and the spirits that flow in those assemblies. When these waters become bitter, a third of the men lose their faith (spiritual death).

Remembering Yeshua was sacrificed on a tree, let us look at Exodus 15 where a tree was cast into bitter waters. Water can represent many things, but here they represent bitter spirits. (The symbolism may be that Yeshua’s sacrifice makes the spirit sweeter).

Shemote (Exodus) 15:22-25
22 So Moshe brought Israel from the Red Sea; then they went out into the Wilderness of Shur. And they went three days in the wilderness and found no water.
23 Now when they came to Marah, they could not drink the waters of Marah, for they were bitter. Therefore the name of it was called Marah.
24 And the people complained against Moshe, saying, “What shall we drink?”
25 So he cried out to Yahweh, and Yahweh showed him a tree. When he cast it into the waters, the waters were made sweet. There He made a statute and an ordinance for them, and there He tested them….

If believing on Yeshua can make the waters of our spirits sweeter, then the reverse should also be true: turning away from Yeshua should make the waters of our spirits bitter again, leading to spiritual death. This would occur under a one world religion (and as we saw earlier, the pope and the Muslims have already agreed that it is not necessary to believe on Yeshua in order to be saved). When Revelation 8:11 says that men will die after trumpet 3, it may mean they will die spiritually (when they turn away from Yeshua, and embrace the one world religion).

At trumpet 4, a third of the sun, moon, and stars are all struck.

Hitgalut (Revelation) 8:12-13
12 Then the fourth messenger sounded: And a third of the sun was struck, a third of the moon, and a third of the stars, so that a third of them were darkened. A third of the day did not shine, and likewise the night.
13 And I looked, and I heard an angel flying through the midst of heaven, saying with a loud voice, “Woe, woe, woe to the inhabitants of the earth, because of the remaining blasts of the trumpet of the three messengers who are about to sound!”

B’reisheet (Genesis) 22:17
17 “….blessing I will bless you, and multiplying I will multiply your descendants as the stars of the heaven and as the sand which is on the seashore; and your descendants shall possess the gate of their enemies.”

When a third of the stars are darkened, it may refer to a time when a third of the seed of Avraham (Christians, Jews, and Muslims) lose faith in their Creator (whatever they call Him) because things have gone differently than they expected.

Yahweh is a loving Father. He is attempting to get His fallen children to turn back to Him, starting out softly, and then increasing the disciplines. Most men, of course, have hard hearts, and will not repent.