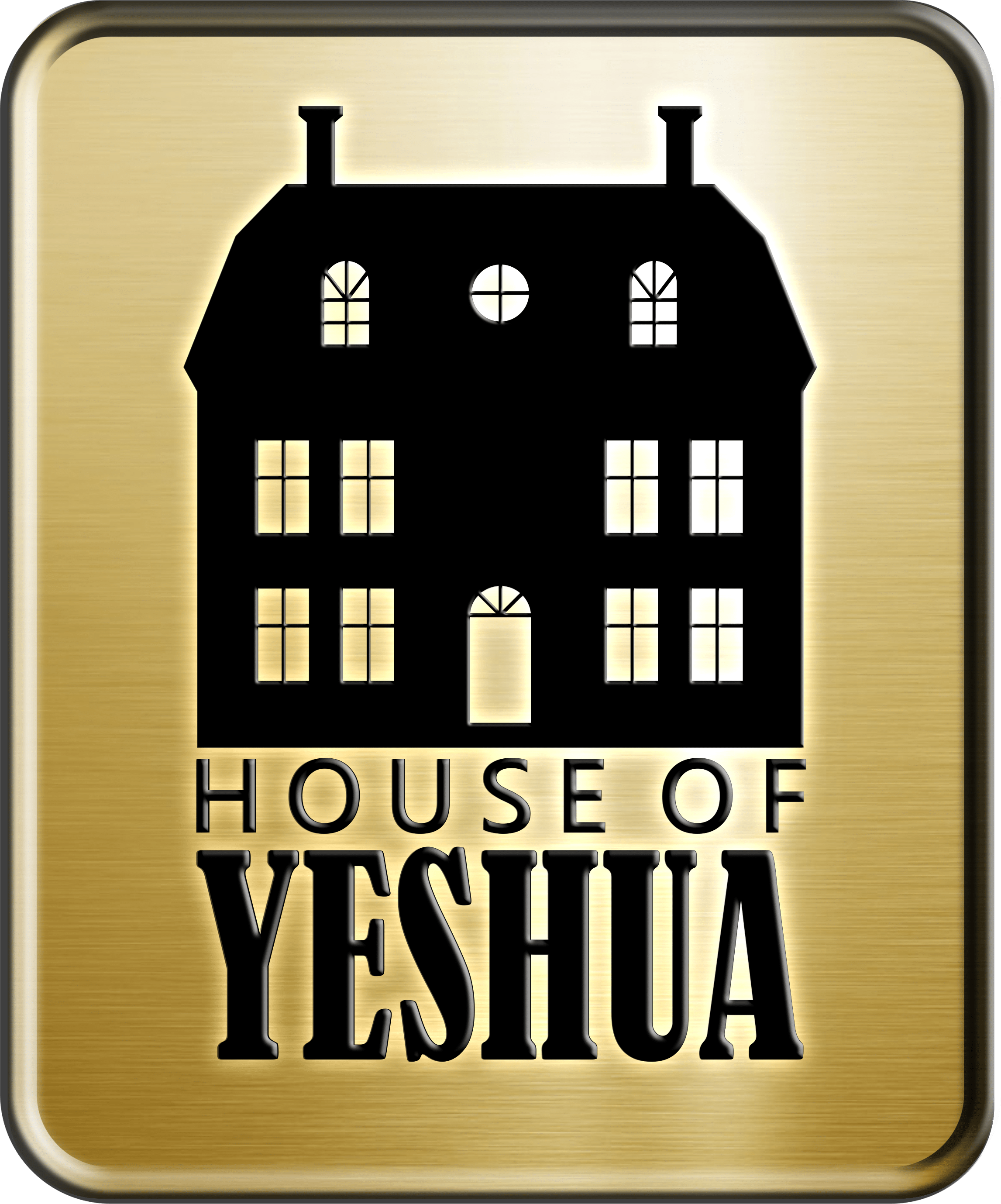 When I was first called to repentance in 1999, Yahweh led me straight to what was then called the Messianic Israel movement. Since I was seeking a teacher, I wrote to the leaders of the movement, only to realize that the movement was then undergoing a split. I was horrified to watch a private flame war between these leaders, who hurled insults back and forth with size 72 fonts in all colors. Each side was seeking to “win the war” by smacking each other with the biggest put-downs. Here is an old slide I made back in those days. 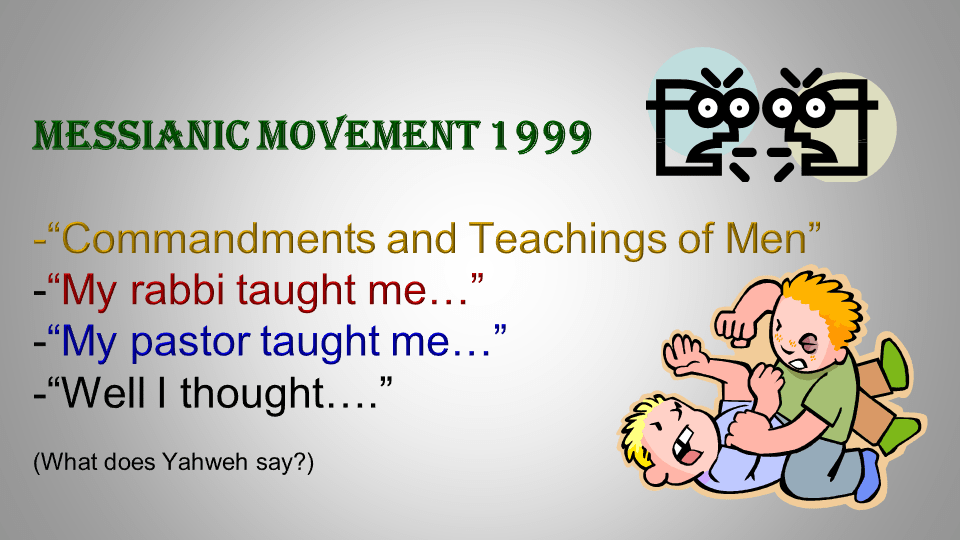 As I kept looking for a leader or a teacher I could disciple under, invariably I was eventually asked to accept the teacher’s opinion on a matter, even though he could not provide me with chapter and verse. (Alternately, when I did hear chapter and verse, it did not add up.) Everyone had opinions, and everyone had ideas, but it was as if their ideas were all flawed, and only “half-baked.”

Hoshea (Hosea) 7:8
8 “Ephraim has mixed himself among the peoples; Ephraim is a cake unturned.”

Then as now, ministers would build ministries quickly and easily by selling books and tapes filled with popular half-truths. I saw several large ministries spring up quickly, gain fame and success, and then suddenly fall. And the reason they fell is that they did things differently than Yeshua did. While they preached all about Yeshua, they did not truly model Him or His ministry style.

Qorintim Aleph (1 Corinthians) 3:11-15
11 For no other foundation can anyone lay than that which is laid, which is Yeshua Messiah.
12 Now if anyone builds on this foundation with gold, silver, precious stones, wood, hay, straw,
13 each one’s work will become clear; for the Day will declare it, because it will be revealed by fire; and the fire will test each one’s work, of what sort it is.
14 If anyone’s work which he has built on it endures, he will receive a reward.
15 If anyone’s work is burned, he will suffer loss; but he himself will be saved, yet so as through fire.

I thank Yahweh for showing me early on that for our nation to unite, first it would be necessary to establish a proper and carefully researched doctrinal foundation.

Amos reminds us that two cannot walk together unless they are agreed.

Amos 3:3
3 Can two walk together, unless they are agreed?

The more I thought about it, the more I realized that it was essential to study things thoroughly out, so that we could know with certainty what Yahweh wanted us to do.

Yeshua tells us that the time is coming, and now is, when the true worshipers will worship the Father both in Spirit, and in truth, for the Father seeks such to worship Him.

Without truly knowing what He wants, it is impossible to please the Father. That is why doctrine is so crucial.

Because His brothers rejected Him, Yeshua has chosen to sojourn with the house of Ephraim, and the house of Ephraim will be restored when we restore Yeshua’s house (which is Nazarene Israel). And in building any house, the most important part is the foundation.

The thing about laying a foundation is that it is not easy. It is dirty, hard work, and most of the time spent in building a house is spent in the groundwork phase. (The walls and the roof go up quickly in comparison). And in our example, the foundation represents the doctrine by which the beit din leadership council operates.

Ephesim (Ephesians) 2:19-22
19 Now, therefore, you are no longer strangers and foreigners, but fellow citizens with the saints and members of the household of Elohim,
20 having been built on the foundation of the apostles and prophets, Yeshua Messiah Himself being the chief cornerstone,
21 in whom the whole building, being fitted together, grows into a set-apart temple in Yahweh,
22 in whom you also are being built together for a dwelling place of Elohim in the Spirit. 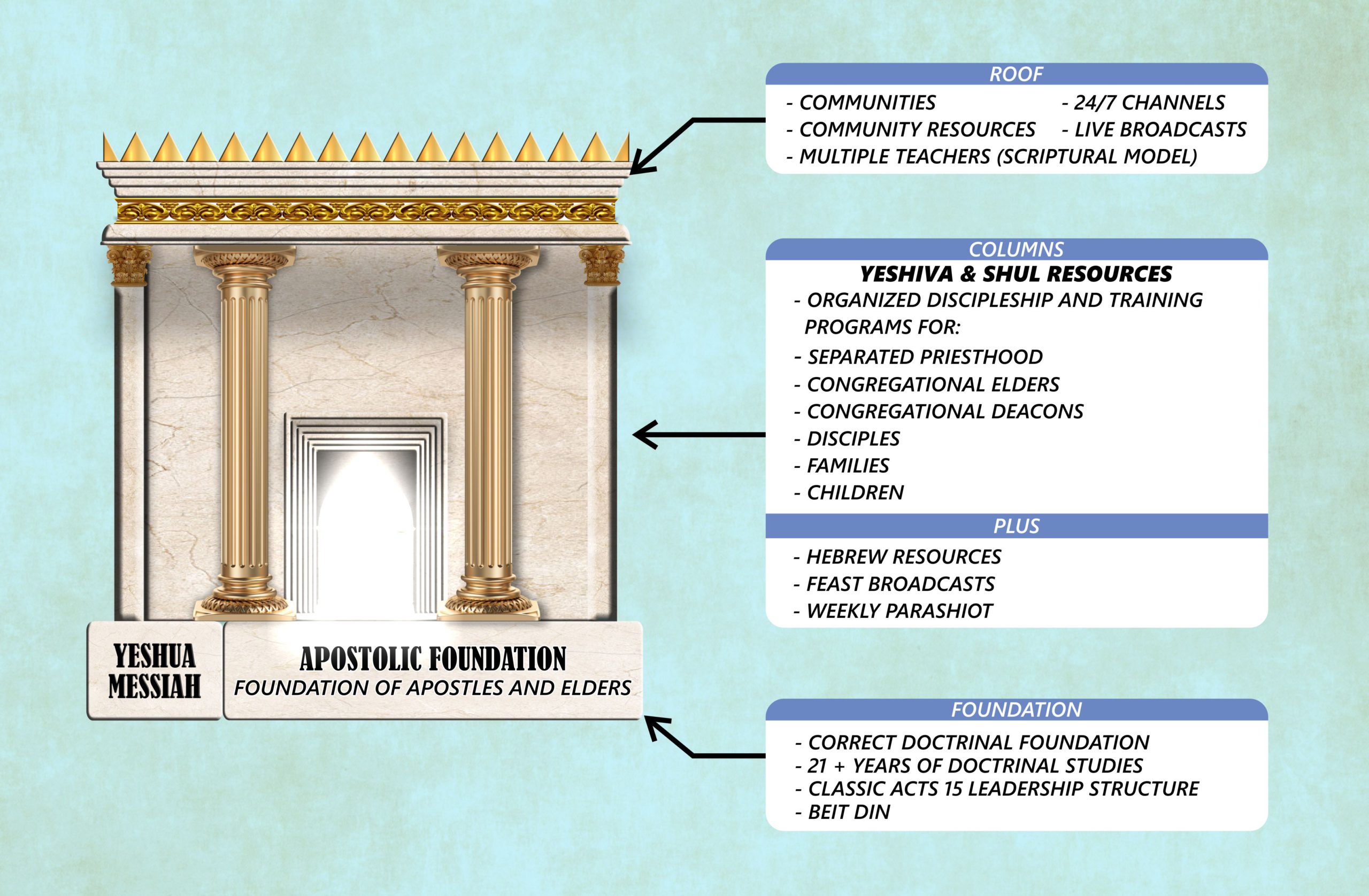 As we show in Torah Government and Acts 15 Order, Yeshua is the Chief Cornerstone of the foundation, and the apostles and elders who make up the rest of the foundation must be in constant contact with Him. Only when the foundation is in contact with Yeshua does it provide a stable surface upon which to build. The 21+ years of careful doctrinal studies that Nazarene Israel has written form the doctrine for this foundation. These doctrinal studies give us a basis for agreement, and they also give us a means for right-ruling in matters of internal justice. Such a system of justice based on Elohim’s word is necessary for any nation to grow and develop.

The Columns and Walls

Although Nazarene Israel will continue to establish new doctrinal studies, it will also take the existing studies and put them on video in an organized fashion, to form the basis for a yeshiva (seminary) and shul (school). In this way we can establish organized discipleship and training programs for the separated priesthood, congregational elders, deacons, disciples, families, and children. Such training and certification will give us the basis for self-governance and schools, so that genuine unity can once again be a reality for our people.

In our example, the “roof” will be physical and virtual communities and community resources. And because we are established on a basis of doctrine rather than individual ministers and personalities, it also gives us the ability to have multiple teachers working together, so that true unity is achieved.

At the time of this writing (2020 CE) we are finishing the foundation phase. After 21 years we now have a coordinated, proven set of doctrinal materials that tell us what Yeshua wants us to do, and how He wants us to do it. At this point what remains is to do it.

While we plan to continue strengthening and growing the foundation, we are now preparing to put up the walls (and then someday the roof). These are things that will help everyone who loves Yeshua.

Yeshua’s kingdom is based on service and sacrifice. If you can help us advance Yeshua’s kingdom according to His word, it will help establish our Husband’s kingdom here on this earth. This will greatly please both Yeshua, and His Father (who controls all).

If you would like to please Yahweh and Yeshua, please pray about helping Nazarene Israel to fulfill the vision and mission that was given to us back in 1999 CE. It will mean a better, more faithful world for you and your family in the years ahead.