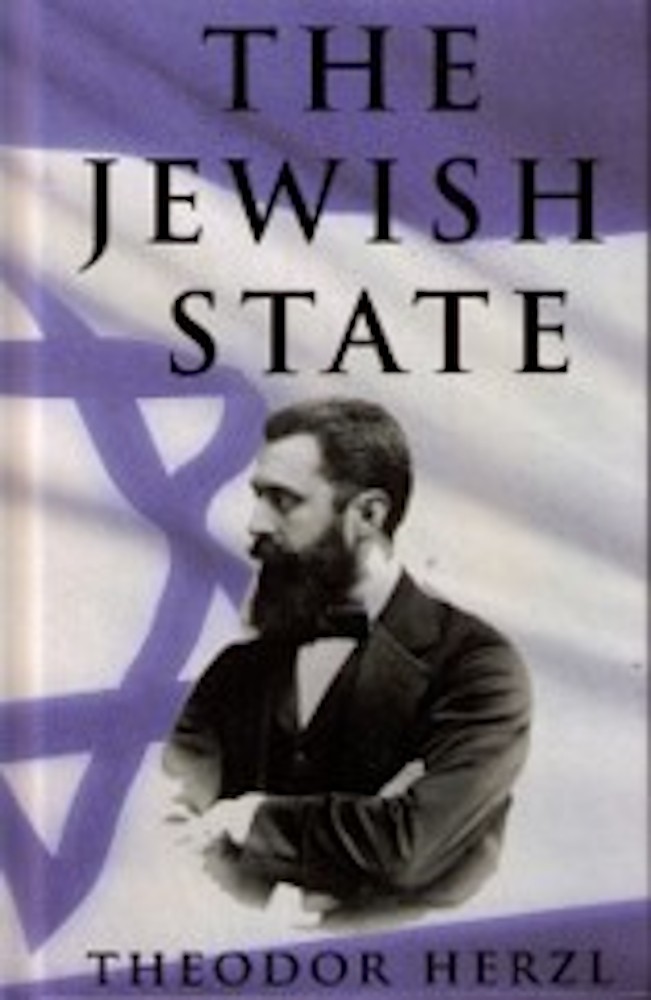 Political Zionism is the idea that the Jewish people have not only the authority, but also the responsibility to act as their own Messiah, and bring themselves back to the land of Israel by their own power and strength. This idea first took hold around 1896, as advocated by Theodore Herzl in his book, Der Judenstaadt (The Jewish State).

It is easy to understand why the Jewish people might want to establish their own state. After they were sent into exile by the Romans for the death of Yeshua (Jesus), they suffered for many centuries at the hands of the Catholics, the Eastern Orthodox Christians, and the Protestants. It was only after the so-called Enlightenment (the Luciferism) of the 18th century that European Christian nations allowed Jews to be citizens.

While there is still a lot of anti-Jewish sentiment in the Christian world, things began to change after the Holocaust. After a third of world Jewry died, the Jews began to campaign for their own state in the land of Israel, and world public opinion shifted in favor of a Jewish state. American Evangelical Christians have been among the strongest supporters in this regard, and this trend makes more sense if we understand the Two Houses of Israel.

As we show in the study Nazarene Israel, the Original Faith of the Apostles, there were originally twelve tribes of Israel. These twelve tribes began to segregate into two camps during the era of Judges. While there was a great deal of animosity and fighting, there was also a natural family affinity between the two houses.

The northern ten tribes were called by a few different names, including the house of Israel, also called the house of Ephraim, and Joseph. These ten tribes were taken into captivity by Assyria around 732 BCE for gross violations of the Torah of Moshe (the Law of Moses). As we show in Nazarene Israel and other studies, the Scripture prophecies tell us that these lost Ephraimites would start to reappear around 1998 CE, with other advances in 2017. Yet the largest contingent of the Ephraimites would not realize who they were until after the tribulation and Armageddon (circa 2048-2049).

The two southern tribes were called the house of Judah, and for various reasons they kept the Torah of Moshe better than the northern house of Ephraim did. However, they still violated the Torah regarding the land rest laws, and Yahweh send the Babylonian Empire to take them into the Babylonian Exile circa 586 BCE. Starting some 70 later, a fraction of them returned in the days of Ezra and Nehemiah. They went on to repopulate the land, and this is the same group who asked the Romans to put Yeshua the Messiah to death in the first century. The Romans then destroyed the temple in 70 CE, and they also began persecuting the house of Judah at that time. This persecution continues even to this day, through the actions of the Roman Catholic Church.

As we show in Nazarene Israel, the prophecies tell us that the Ephraimites would be scattered into all the four corners of the earth. Today their genetics are to be found literally in every family, every nation, and every clan—yet when we speak of the Ephraimites, usually mean those who have accepted the Good News in Yeshua. As we show in Nazarene Israel there would be many Ephraimites in the United States, even if they are still lost inside of Christianity (and are not aware that they are Ephraimites). The large numbers of Ephraimites in the United States is undoubtedly the reason for the strong support America’s evangelical Christians give to the State of Israel. The natural family affinity between the Ephraimites and Jews also helps to explain why US President Trump recently recognized Jerusalem as the capital of the State of Israel, legitimizing the efforts of political Zionist Jews to restore themselves to the land of Israel without aid of the Messiah. But the question we need to ask ourselves at this point is, no matter how much we love Judah, is political Zionism biblically correct? Or is it rebellion against Yeshua, meaning that we should abstain (out of loyalty to Yeshua)?

Yehezqel (Ezekiel) 37:15-22
15 Again the word of Yahweh came to me, saying,
16 “As for you, son of man, take a tree for yourself and write on it: ‘For Judah and for the children of Israel, his companions.’ Then take another tree and write on it, ‘For Joseph, the stick of Ephraim, and for all the house of Israel, his companions.’
17 Then join them one to another for yourself into one tree, and they will become one in your hand.
18 “And when the children of your people speak to you, saying, ‘Will you not show us what you mean by these?’ —
19 say to them, ‘Thus says Yahweh Elohim: “Surely I will take the tree of Joseph, which is in the hand of Ephraim, and the tribes of Israel, his companions; and I will join them with it, with the tree of Judah, and make them one tree, and they will be one in My hand.”‘
20 And the trees on which you write will be in your hand before their eyes.
21 “Then say to them, ‘Thus says Yahweh Elohim: “Surely I will take the children of Israel from among the nations, wherever they have gone, and will gather them from every side and bring them into their own land;
22 and I will make them one nation in the land, on the mountains of Israel; and one king shall be king over them all; they shall no longer be two nations, nor shall they ever be divided into two kingdoms again.”

When I was first introduced to this passage I was told that the command to take a tree for Judah was fulfilled by Jewish political Zionism. The Jewish political Zionists had taken action to organize (i.e., they had taken a tree), and because they had organized they had the political clout to come home. Based on that, it seemed to make sense that Ephraim should also organize, and take the initiative to come home. However, considering our other studies, there are some issues with this interpretation.

First, no matter what Judah did historically, verse 19 says that Yahweh will take the tree of Joseph (in the hand of Ephraim) and join it with the tree of Judah. That seems to indicate that while Ephraim should organize (take a tree), that he should also wait for Yahweh to bring him home. A second witness is found in verse 21, which says that Yahweh will take the children of Israel from among the nations, and gather them from every side, and bring them into their own land. While this may speak of Ephraim organizing, it does not speak of Ephraim regathering himself (as in political Zionism). Rather, he should wait for Yahweh to bring him home.

Additionally, in Revelation and the End Times we saw that Ephraim comes home after Armageddon, which takes place near the start of the millennium. (This is why bow and sword of battle are shattered from the earth).

Hoshea (Hosea) 2:18-23
18 “In that day I will make a covenant for them With the beasts of the field, With the birds of the air, And with the creeping things of the ground. Bow and sword of battle I will shatter from the earth, To make them lie down safely.
19 “I will betroth you to Me forever; Yes, I will betroth you to Me In righteousness and justice, In lovingkindness and mercy;
20 I will betroth you to Me in faithfulness, And you shall know Yahweh.
21 “It shall come to pass in that day That I will answer,” says Yahweh; “I will answer the heavens, And they shall answer the earth.
22 The earth shall answer With grain, With new wine, And with oil; They shall answer Jezreel.
23 Then I will sow her for Myself in the earth [i.e., the land of Israel], And I will have mercy on her who had not obtained mercy; Then I will say to those who were not My people, ‘You are My people!’ And they shall say, ‘You are my Elohim!’”

It is only after bow and sword of battle are shattered from the earth that Yahweh re-sows Ephraim into the land. This is the same event as when Yahweh gathers Ephraim from every side, and brings him into the land of Israel, as we already saw in Ezekiel 37:21.

Armageddon is also when the survivors of Judah accept Yeshua as Messiah (instead of attempting to fulfill the role of the Messiah themselves).

Zechariah 12:9-11
9 “It shall be in that day that I will seek to destroy all the nations that come against Jerusalem.
10 And I will pour on the house of David and on the inhabitants of Jerusalem the Spirit of grace and supplication; then they will look on Me [Yeshua] whom they pierced. Yes, they will mourn for Him as one mourns for his only son, and grieve for Him as one grieves for a firstborn.
11 In that day there shall be a great mourning in Jerusalem, like the mourning at Hadad Rimmon in the plain of Megiddo.”

So as much as we love Judah, and as much as we can understand his desire for an end to his long exile, it is not right to support political Zionism, because in the end political Zionism is an attempt to go around the need to believe on Yeshua. Further to that point, by supporting him, the Evangelical Christian community is sharing in his evil deeds (verse 11).

Yochanan Bet (2 John) 7-11
7 For many deceivers have gone out into the world who do not confess Yeshua Messiah as coming in the flesh. This is a deceiver and an antimessiah.
8 Look to yourselves, that we do not lose those things we worked for, but that we may receive a full reward.
9 Whoever transgresses and does not abide in the doctrine of Messiah does not have Elohim. He who abides in the doctrine of Messiah has both the Father and the Son.
10 If anyone comes to you and does not bring this doctrine, do not receive him into your house nor greet him;
11 for he who greets him shares in his evil deeds.

What evil deeds? As we show in Revelation and the End Times, there will one day be an anti-Messiah’s temple in Jerusalem, in which a man of sin (i.e., the papacy or its successor) will rule.

Thessaloniquim Bet (2 Thessalonians) 2:3-4
3 Let no one deceive you by any means; for that Day will not come unless the falling away comes first, and the man of sin is revealed, the son of perdition,
4 who opposes and exalts himself above all that is called Elohim or that is worshiped, so that he sits as Elohim in the temple of Elohim, showing himself that he is Elohim.

Above is a picture of the Ashkenazi and Sephardic Grand Rabbis asking the papacy to establish a “United Nations of Religion” on the Temple Mount. The rabbis asked the head of Mystery Babylon to officiate in their temple, because the rabbinical order was created in Babylon (and is essentially Babylonian). Together with Cousin Ishmael they will ultimately build this anti-Yeshua temple in the Zionist State of Israel.