Today, many believers think that all we need is to have faith in Yeshua Messiah (Jesus Christ). However, this is not what the Scriptures teach. Rather, in many places and many ways, Scripture teaches that we are expected to keep “the” faith that was once for all delivered to the saints.

For example, in Jude 3, Yehudah (Jude) tells us that in the first century, there were other believers who were also saved, but that they did not believe the same thing as he did. Jude tells them that while they all shared a common salvation due to faith in Yeshua, it was not good enough. Rather, he still found it necessary to write to them, exhorting them to contend earnestly for “the” faith which was once for all delivered to the saints.

We should note carefully that the word “the” is Strong’s Concordance NT:3588, referring to the definite article, “the” (as in, “the faith”). (Emphasis mine.)

Even though it is sometimes (falsely) supplied, and at other times (falsely) omitted, it refers to the definite article, “the.” Therefore, while Jude is telling the other believers that yes, they are saved, it is still needful that they practice “the” faith that was once for all delivered to the saints (which is Nazarene Israel).

Exhortation and encouragement to keep “the” faith occurs at least 30 times in the Renewed Covenant.

In Ephesians 4:13, Shaul tells us that we are to practice the fivefold ministry until we all come to the unity of “the” faith. Since the subject is unity, this can only refer to a single (pinpoint) faith (with a single doctrine).

Ephesim (Ephesians) 4:13
13 till we all come to the unity of the faith and of the knowledge of the Son of Elohim, to a perfect man, to the measure of the stature of the fullness of Messiah….

In Colossians 2:7, the Apostle Shaul and Timothy write to the saints in Colossae, encouraging and exhorting them to be established in “the” faith.

Colossae (Colossians) 2:6-7
7 rooted and built up in Him and established in the faith, as you have been taught, abounding in it with thanksgiving.

Then in 1 Timothy 4:1, Shaul tells Timothy that some will depart from “the” faith, by giving heed to deceiving spirits and doctrines of demons. While these may still profess Yeshua, the truth is that when they embrace other spirits and other doctrines, they join a different faith.

TimaTheus Aleph (1 Timothy) 4:1
4 Now the Spirit expressly says that in latter times some will depart from the faith, giving heed to deceiving spirits and doctrines of demons…

In Titus 1:13, Shaul tells Titus to rebuke idle talkers and deceivers, especially those of the circumcision (i.e., rabbinic Messianics who believe in Talmud), that they may be sound in “the” faith (which is not rabbinic).

Titus 1:10-16
10 For there are many insubordinate, both idle talkers and deceivers, especially those of the circumcision,
11 whose mouths must be stopped, who subvert whole households, teaching things which they ought not, for the sake of dishonest gain.
12 One of them, a prophet of their own, said, “Cretans are always liars, evil beasts, lazy gluttons.”
13 This testimony is true. Therefore rebuke them sharply, that they may be sound in the faith,
14 not giving heed to Jewish fables and commandments of men who turn from the truth.
15 To the pure all things are pure, but to those who are defiled and unbelieving nothing is pure; but even their mind and conscience are defiled.
16 They profess to know Elohim, but in works they deny Him, being abominable, disobedient, and disqualified for every good work.

This passage is important, because it identifies Talmudic rabbinic Messianic Judaism as a false faith, which is different in works than “the” faith once delivered to the saints.

And there are other hidden references. For example, in Luke 18:8, Yeshua asks rhetorically if He will find “the” faith when He returns to the earth. However, we have to look at the Greek manuscripts, because sometimes the translations falsely omit the definite article “the.”

Luqa (Luke) 18:8
8 “I tell you that He will avenge them speedily. Nevertheless, when the Son of Man comes, will He really find [the] faith on the earth?” 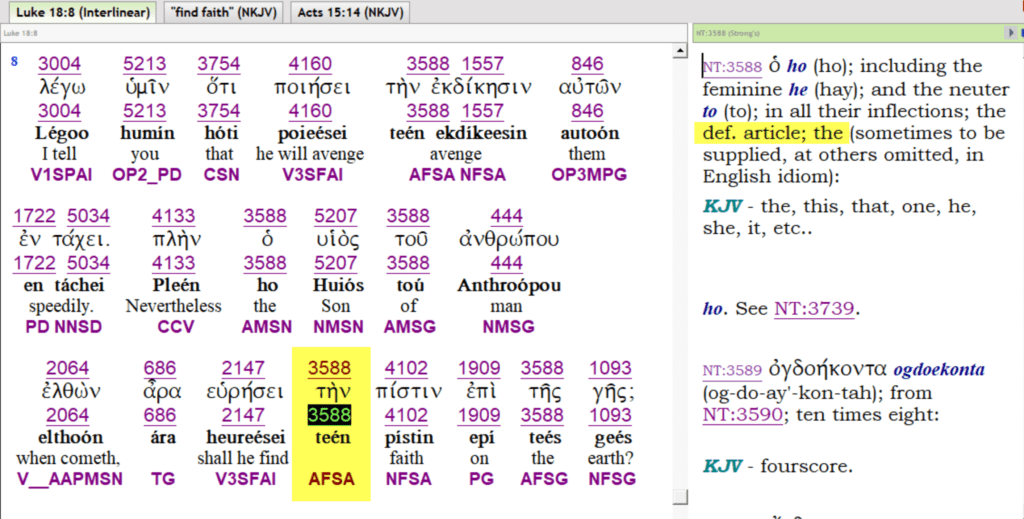 This means that when Yeshua returns, He will not look only for those who have faith in Him, but also for those who practice the specific faith that He taught while He was here. That faith is called the Jewish (or Israelite) sect of the Nazarenes.

Ma’asei (Acts) 24:5
5 “For we have found this man a plague, a creator of dissension among all the Jews throughout the world, and a ringleader of the sect of the Nazarenes.”

This is the only faith that builds His kingdom the way He says He wants it built.

Is this the faith that we have? And do we practice it, that we might be approved, in that day?