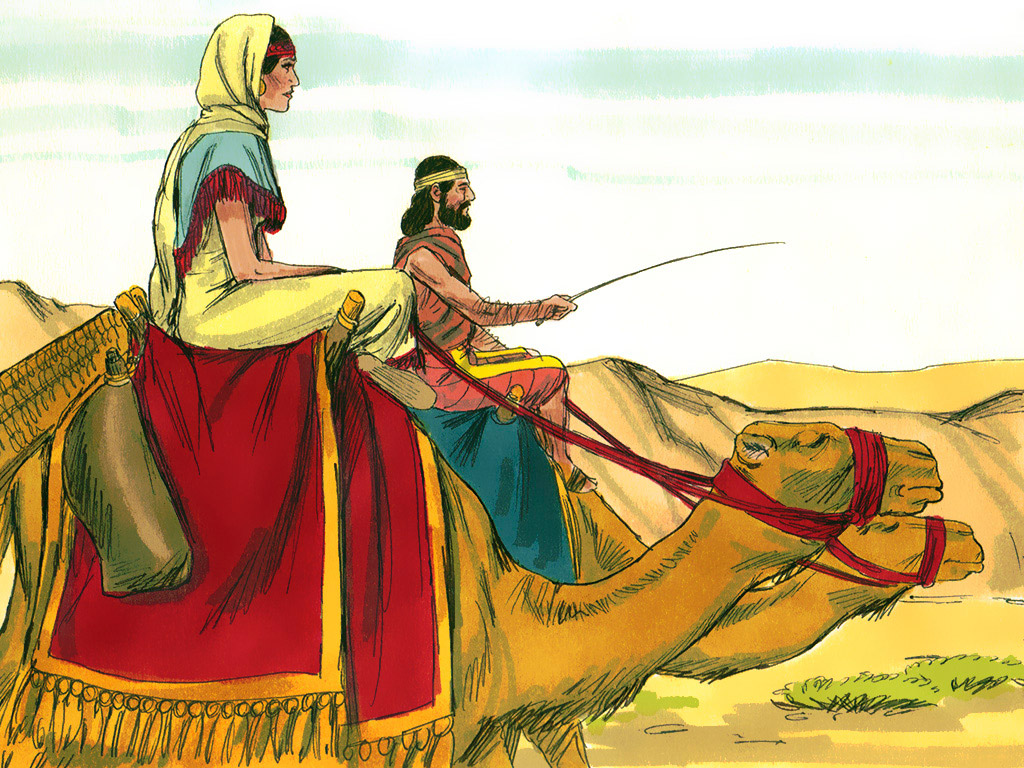 While there were no real marriage traditions yet in either Avraham’s or the Patriarch’s time, certain righteous standards were obeyed, and these still apply to us today. In this chapter we want to learn about those righteous standards. This will help us to understand the marriage traditions of Yeshua’s time, which we will talk about in the next chapter.

In the Beginning: The Father Selects the Bride

Earlier we saw that traditionally, families lived together, and children normally married young. Because of this, a father got intimately involved in selecting a bride for his son, in the hopes of helping his son have a successful marriage.

If we are willing to receive it, this pattern is established in Genesis 2. Yahweh Elohim saw that it was not good for the man (i.e., His “son”) to be alone. Therefore, the Father decided to help him find a helper comparable (or corresponding) to him, and He went to a lot of time and effort to do so.

B’reisheet (Genesis) 2:18-24
18 And Yahweh Elohim said, “It is not good that man should be alone; I will make him a helper comparable to him.”
19 Out of the ground Yahweh Elohim formed every beast of the field and every bird of the air, and brought them to Adam to see what he would call them. And whatever Adam called each living creature, that was its name.
20 So Adam gave names to all cattle, to the birds of the air, and to every beast of the field. But for Adam there was not found a helper comparable to him.
21 And Yahweh Elohim caused a deep sleep to fall on Adam, and he slept; and He took one of his ribs, and closed up the flesh in its place.
22 Then the rib which Yahweh Elohim had taken from man He made into a woman, and He brought her to the man.
23 And Adam said: “This is now bone of my bones And flesh of my flesh; She shall be called Woman, Because she was taken out of Man.”
24 Therefore a man shall leave his father and mother and be joined to his wife, and they shall become one flesh.

While it seems unthinkable, what is not said here is that at least hypothetically, Adam could at least theoretically have refused the woman that his Father brought for him, because in a matter as personal as marriage, both the groom and the bride have veto power.

Of course, Yahweh Elohim does not make mistakes, and Adam recognized the fact that the bride his Father had brought him was a perfect match, and so he consented to that match, realizing that she was a perfect fit for him. However, what we should see here is that even though the first marriage of mankind was arranged, it is not as if the son had no say. Rather, he had the choice either to accept or reject the bride he was brought. Only, it is not recorded, because he approved.

Some young men might want to reject the idea of getting their fathers involved in their marriage plans, but notice how righteous Avraham followed the same pattern when he sent his servant Eliezer to take a bride for his son Yitzhaq.

B’reisheet (Genesis) 24:2-4
2 So Abraham said to the oldest servant of his house, who ruled over all that he had, “Please, put your hand under my thigh,
3 and I will make you swear by Yahweh, the Elohim of heaven and the Elohim of the earth, that you will not take a wife for my son from the daughters of the Canaanites, among whom I dwell;
4 but you shall go to my country and to my family, and take a wife for my son Yitzhaq.”

If we are willing to receive it, the pattern is that a father used all of his experience and resources to help his son get the best bride that he can, even putting his treasure into the search.

B’reisheet (Genesis) 24:10
10 Then the servant took ten of his master’s camels and departed, for all his master’s goods were in his hand. And he arose and went to Mesopotamia, to the city of Nahor.

We should also notice that even though Avraham’s servant Eliezer arranged the marriage, it is not as if Yitzhaq had no say. Yitzhaq could hypothetically have refused the deal, and Rivkah would have been returned back home to Padan Aram (although the dowry would probably not have been refunded.)

Thankfully, Yitzhaq made the decision to take Rivkah as his wife, thus consummating the marriage.

B’reisheet (Genesis) 24:67
67 Then Isaac brought her into his mother Sarah’s tent; and he took Rebekah and she became his wife, and he loved her. So Isaac was comforted after his mother’s death.

After the meeting of the minds and the exchange of consideration, when the bride was presented to Yitzhaq, he approved of the deal, and decided to take her as his wife. He claimed her, and took responsibility for her. The Hebrew word is kakh (קַּח), which means simply, to take.

OT:3947 laqach (law-kakh’); a primitive root; to take (in the widest variety of applications).

Since the groom must assume full responsibility for his bride, it is ultimately his decision whether or not to go through with the deal. However, once he does, headship of the bride legally transfers from her father, to him, and he is now 100% responsible for her, and any children they have together. And again, that is why he is well advised to seek the experience and involvement of his father and the Spirit in the selection of his bride.

Later: Men Choose Wives Based on Their Lusts

One of the things Genesis shows us is the differentiation between the few people who truly want to serve Elohim, and the rest of fallen mankind (which seeks only to serve itself). That is why, in contrast to the example given by righteous Avraham, we also read about murderers such as Lamech, who took two wives for himself.

B’reisheet (Genesis) 4:19
19 Then Lamech took for himself two wives: the name of one was Adah, and the name of the second was Zillah.

Notice that Lamech does not seek Yahweh, or the Spirit. He does not even inquire of his earthly father. Rather, Lamech simply took two wives for himself, based on his own desires, much as young men are expected to do in worldly culture today.

Next, in a much-misunderstood passage, let us notice that the Nephilim (the Fallen Ones) did the same thing. Instead of taking wives who would help them raise up children to serve their Father Yahweh Elohim, they took wives for themselves (that is, to satisfy their own lusts).

B’reisheet (Genesis) 6:1-4
1 Now it came to pass, when men began to multiply on the face of the earth, and daughters were born to them,
2 that the sons of Elohim saw the daughters of men, that they were beautiful; and they took wives for themselves of all whom they chose.
3 And Yahweh said, “My Spirit shall not strive with man forever, for he is indeed flesh; yet his days shall be one hundred and twenty years.”
4 There were giants on the earth in those days, and also afterward, when the sons of Elohim came in to the daughters of men and they bore children to them. Those were the mighty men who were of old, men of renown.

Many people incorrectly believe that the Nephilim were divine beings. However, that is not possible. Notice first that the subject of this passage is men. Early in Genesis it was still understood that Yahweh Elohim had created men, and so their heavenly Father was Yahweh Elohim. (This is what Yeshua also said). That being the case, what is being pointed out in Genesis 6 is that rather than Yahweh Elohim’s children being righteous, and seeking His face in finding righteous wives (to help them raise up righteous families), the spiritually fallen ones took wives for themselves (i.e., to please themselves). That is why Yahweh said He would limit man’s days to 120 years, was because His Spirit would not strive or contend with such self-willed beings forever.

[As an alternate interpretation, we could note that the word elohim can also refer to rulers, judges, and other earthly mighty ones. It is Strong’s Hebrew Concordance OT:430, which can refer to great men, or judges, or even mighty men.

OT:430 ‘elohiym (el-o-heem’); plural of OT:433; gods in the ordinary sense; but specifically used (in the plural thus, especially with the article) of the supreme God; occasionally applied by way of deference to magistrates; and sometimes as a superlative:
KJV – angels, exceeding, God (gods)- dess, -ly), (very) great, judges, mighty.

However, even if we accept this alternate reading, we still get the same problem. Rather than the sons of the earthly rulers seeking Yahweh Elohim’s face about their marriages, they began to choose wives for themselves, to gratify their own desires. However, that does not lead to the establishment of Yahweh Elohim’s kingdom here on earth. Rather, that only serves as a precursor to the kingdom of Babylon, where powerful men serve only themselves at everyone else’s expense.]

And perhaps because Yahweh likes order, another term for marriage is baal. This is a combination of the letter Bet (ב) which means be, and על which means over. Thus, baal means to be over. It is Strong’s Concordance OT:1167, meaning a master, hence, a husband.

OT:1167 ba`al (bah’-al); from OT:1166; a master; hence, a husband, or (figuratively) owner (often used with another noun in modifications of this latter sense):

When we look up the root at OT:1166, we see that it also refers to a master, and hence, marriage.

This refers to how Yahweh gave the man headship over his household (along with the responsibility).

B’reisheet (Genesis) 3:16
16 To the woman He said: “I will greatly multiply your sorrow and your conception; In pain you shall bring forth children; Your desire shall be for your husband, And he shall rule over you.”

There are other Hebrew terms for taking a wife. One special term is yibbum. This is when brothers dwell together, and one of them dies. In this circumstance, the living brother shall take his dead brother’s wife, and raise up an heir for his name (reference Deuteronomy 25:5-6).

Yibbum is Strong’s Hebrew Concordance OT:2992. The meaning of the root is not certain. It is only used in connection with the command to marry a dead brother’s widow, to raise up an heir to his name.

OT:2992 yabam (yaw-bam’); a primitive root of doubtful meaning; used only as a denominative from OT:2993; to marry a (deceased) brother’s widow:

The Modern Word for Marriage: Nissuin

Another word that is used for marriage is nissuin (נישואין). For example, this word is used in 1 Chronicles 23:22.

Divre HaYamim Aleph (1 Chronicles) 23:22
22 And Eleazar died, and had no sons, but only daughters; and their brethren, the sons of Kish, took them as wives.

This word nissuin is based on the root word nasa’ (nah-saw), which is Strong’s Concordance OT:5375, meaning to lift up.

From this we get the idea of lifting the bride up, or perhaps carrying the bride away, reminiscent of how Rivkah was borne aloft on camels to go to her new home and her new life with Yitzhaq.

B’reisheet (Genesis) 24:61
61 Then Rebekah and her maids arose, and they rode on the camels and followed the man. So the servant took Rebekah and departed.

However, today’s rabbinic nissuin is very different than nissuin as it was practiced in Yeshua’s time. And now that we have talked about the basics of consummation in the days of the Creation and the Patriarchs, in the next chapter we will talk about the ancient traditions of nissuin as they were conducted in Yeshua’s time (and which still have meaning for us today).