06 February 2021: Sister Becca Biderman saw Aviv (medium dough) barley in sufficient quantities on 06 February, 2021 near her home in Poriyah Illit. This is her photo from 06 February 2021. It is from her video here. 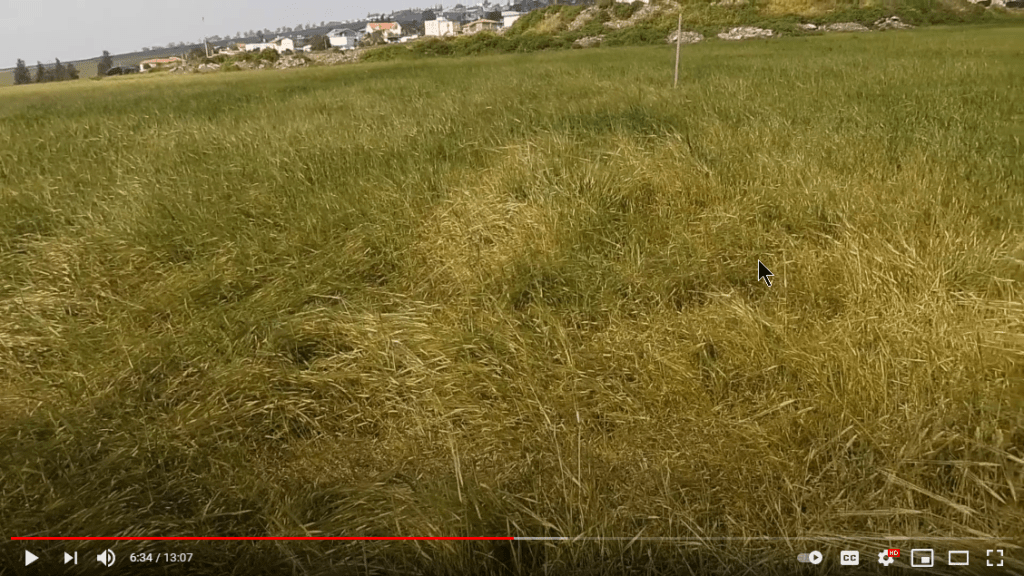 11 February 2021: Devorah’s Date Tree came out to inspect the same field, but stayed near the base of the hill (in the north 1/4 of the field). They were thus unable to find the aviv barley in the southeast of the field, even though they were well aware of Becca Biderman’s work (and should have been able to judge from the photo where to find the Aviv barley patch). They also did not contact Becca Biderman, to ask her to guide them to the Aviv barley in that field, even though Becca would have welcomed the opportunity. Because Devorah’s Date Tree was not able to find the Aviv barley, and because they did not communicate, they (incorrectly) reported that there was no Aviv barley.

19 February 2021: Becca Biderman contacted me on FB Messenger, and she was very upset. From her perspective, she said that Devorah’s Date Tree did not report the field correctly. (She felt the underreporting was intentional.) I interviewed her for many hours, trying to disprove her story, but after scrutinizing her video and photographic witnesses for several hours, I was unable to dismantle any part of her story. (After reviewing all of the evidence with an intent to disprove it, it also seemed to me at that time that Devorah’s Date Tree must have intentionally underreported that field, because there seemed to be no other logical explanation [although there is the possibility of extreme observer bias–but it would have to be extreme].) Based on extensive review of the photographic and video evidence, we recorded a video interview about that field, which I titled “Was the Karaite Barley Report Impartial?”

21 February 2021: Becca Biderman reported that the southeast 1/3 of the Poriyah Illit field was now ready for harvest, and brought home a bucket of barley to prove it. She also reported that the field had been bought by a very nice Arab man, and that the field would be bulldozed (and fenced, and put under gravel) the next day, to make a family-owned tree park. However, that would not have happened in ancient times, so it did not alter the barley witness. 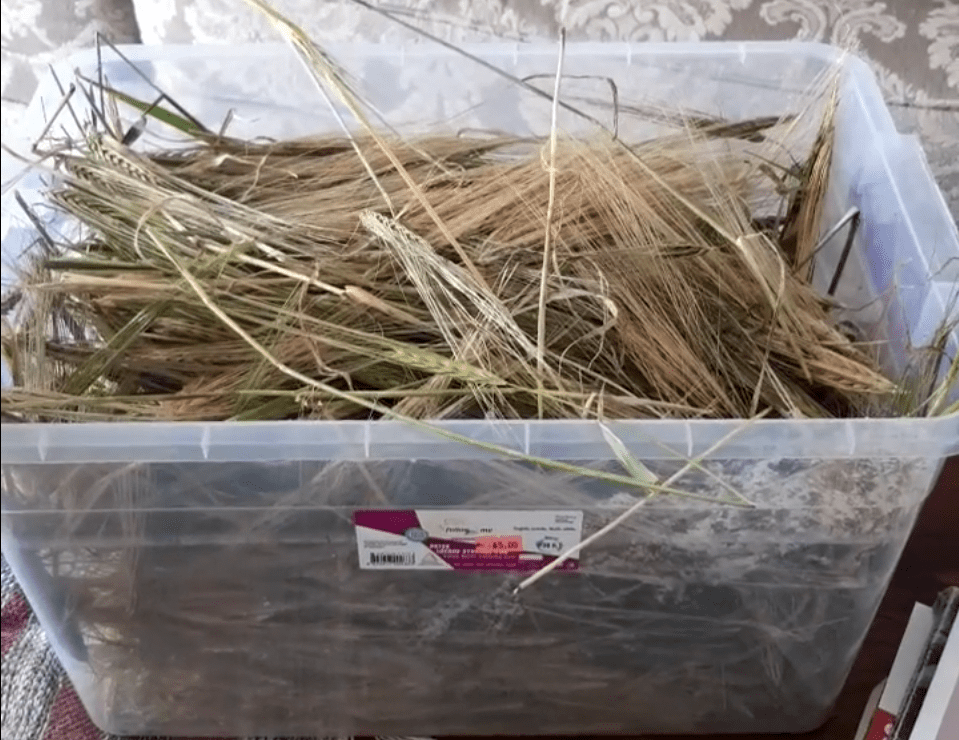 Also on 21 February 2021: Devorah Gordon of Devorah’s Date Tree wrote a short email to demand that we take the video down, which we promptly did.

22 February 2021: Becca Biderman and her new assistant Cindy also found Aviv barley in Reim (near Gaza). The heads of the first flush were already brittle and some stalks were beginning to fall over sideways. The second (green) flush was growing up around it (and through it). 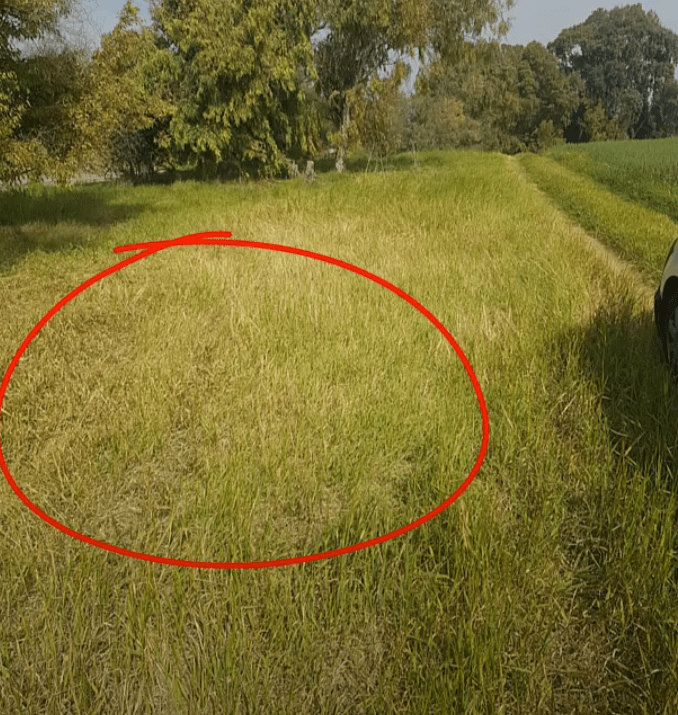 22 February 2021: We re-recorded the interview with Becca Biderman, being careful to state only the facts.

23 February 2021: We re-published our interview as “Becca Biderman’s Barley Field Confirmed.” Then we also wrote to Ms. Gordon, asking that she also take down her (inaccurate) video, as we felt it was misleading many people. She did not even bother to respond to our email (and she never responds to our emails, even though we try to write, and be helpful).

28 February 2021: Because there was enough Aviv barley to form a sheaf on 06 February in Poriyah Illit and from 21-22 February in Reim, the Wave Sheaf would have correctly been offered on 28 February 2021, to clear the way for the rest of the harvest. There is NO possibility that this early barley will stay in the head until the Karaite Wave Sheaf date of 04 April 2021! (The Karaites will suggest that the farmer who owns that field should simply harvest his barley ahead of the Wave Sheaf and the counting of the Omer, but that violates Deuteronomy 16:9.)

1-2 March 2021: Devorah’s Date Tree came to re-inspect the field near Poriyah Illit, but was not able to find the barley in the southeast third of the field because it had already been bulldozed, and put under gravel (as Becca Biderman and myself had already reported). It also seems that the Arab owner greatly extended the bulldozed and fenced area (starting about 1:00:10 in their report). However, that would not have happened in ancient times.

Devorah’s Date Tree also reported that some barley from the first flush had already shattered! However, they did not seem concerned by that, because according to Karaite theology, they would have told the farmer to harvest the first flush and lay it aside (and that the Omer count would not begin with that cutting, even though that directly violates Deuteronomy 16:9, and historical records tell us that is NOT the way it was done in ancient times!).

1-2 March 2021: Devorah’s Date Tree also inspected the field in Reim (seemingly coming in behind Becca), and ignored the first flush of barley that was now laying flat and shattering, and focusing instead on the green heads of the second flush that were growing up through the first flush (see starting around 58:30 in their second inspection report, as they ignore the brown first flush that had already fallen over). Perhaps because Devorah’s Date Tree was looking for fully harvestable fields, they looked right past the (now fallen over) first flush in favor of the immature green second flush, and incorrectly reported that there was no Aviv barley in Reim. (What they should have reported was that the first flush was fallen over and shattering, and that the second flush was still green.) 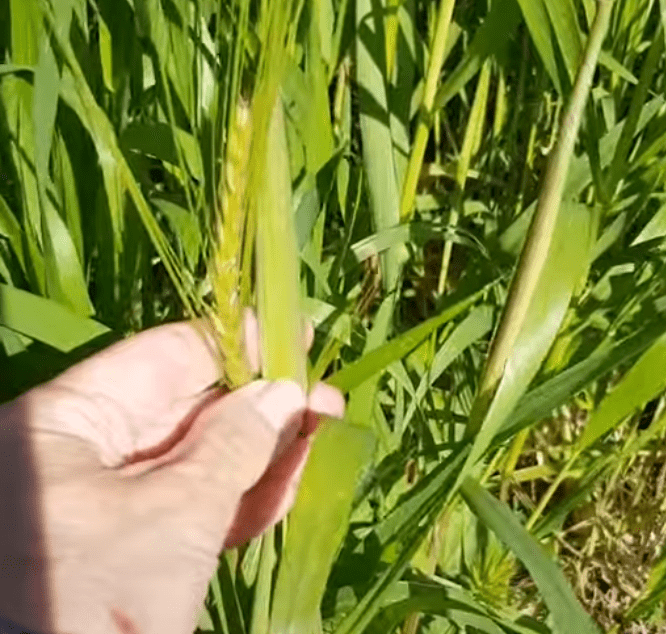 Logically speaking, if the wheat is already flowering, then the month of the Aviv has to be a PAST event!

13 March 2021: I again wrote to Ms. Gordon, to point out her errors to her in a loving way, and again she did not write back. (She never writes, except to make demands.) I also posted this in our Open Letter to Devorah’s Date Tree.

14 March 2021: Yoel HaLevi of “Hebrew in Israel” reports that he has found Aviv barley, and that “There is every reason to believe there will be entire fields of harvestable barley before the date for the waiving of the sheaf”. This shows the same basic Karaite error of wanting to bring in the main harvest first before offering the Wave Sheaf. (This forces a redefinition of Aviv barley from green, tender young grain to harvest-ready grain.) The other main problem is that there is no way that the barley in the foreground will stay in the head until the Karaite Wave Sheaf date of 04 April 2021, three weeks from the date of Yoel HaLevi’s sighting. All of the barley in the foreground will be shattered and on the ground. 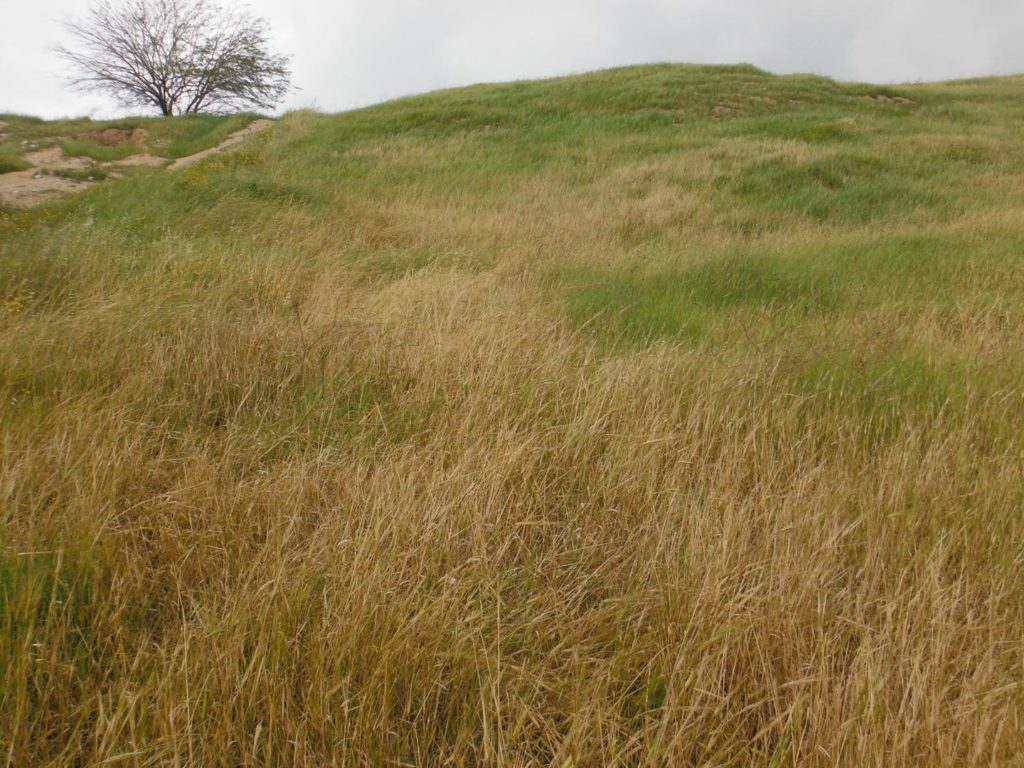 14 March 2021, Becca Biderman shows how the wheat supports an 18 April 2021 date for Shavuot/ Pentecost (and NOT the Karaite or Abib of God calendar dates).

19 March 2021, Becca Biderman inspected a barley field near Migdala, Israel that was approximately two weeks behind the earlier field in Poriyah Illit. The barley fields were not at all uniform (which makes the Karaite doctrine of waiting for uniform fields impossible). The first flush was already too brittle for harvesting, and much of it was already shattered and on the ground, while the second flush was still green and immature. This crop could have been harvested with a Wave Sheaf Offering on February 28th, 2021, but there is no possibility that this barley can wait for a Wave Sheaf Offering on 04 April 2021 (as the first flush is already lost). Here is a sample photo with a shattered barley head. To watch Becca Biderman’s Inspection of SHATTERED Barley in Migdala, click here. 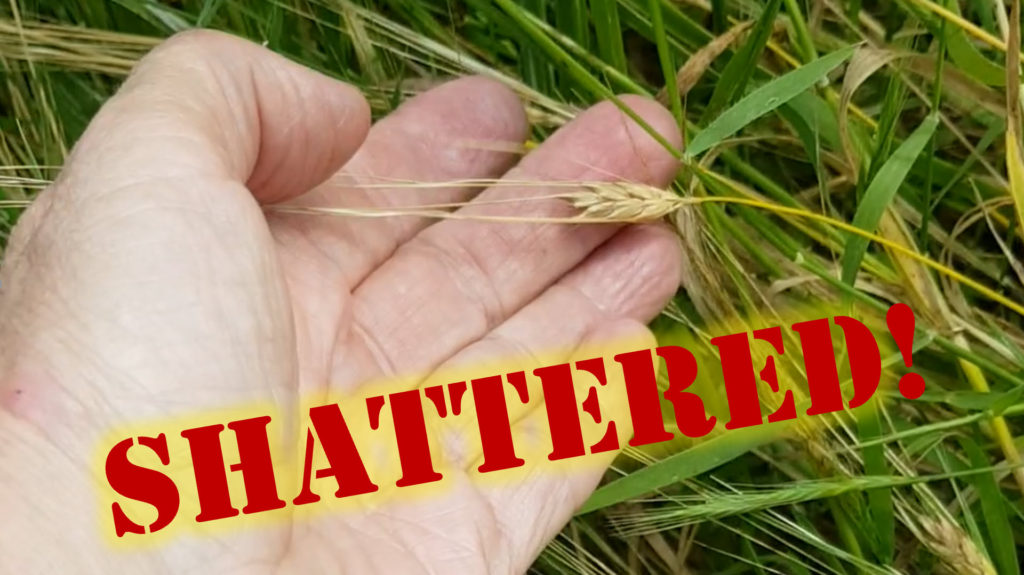 23 March 2021, Becca Biderman reports that the heirloom black spring wheat (which was offered in the temple times) is in bloom. Because wheat is a later crop (and because black wheat is even later), there is no possibility that this can still be the first month (reference Exodus 9:31-32, above).

25 March 2021, It snowed in northern Israel. That is pretty funny, because according to the other barley groups, it would mean we are “still in winter”, and the Passover and the Wave Sheaf Offering should hypothetically be pushed back yet ANOTHER month, even though we already have barley dropping on the ground! 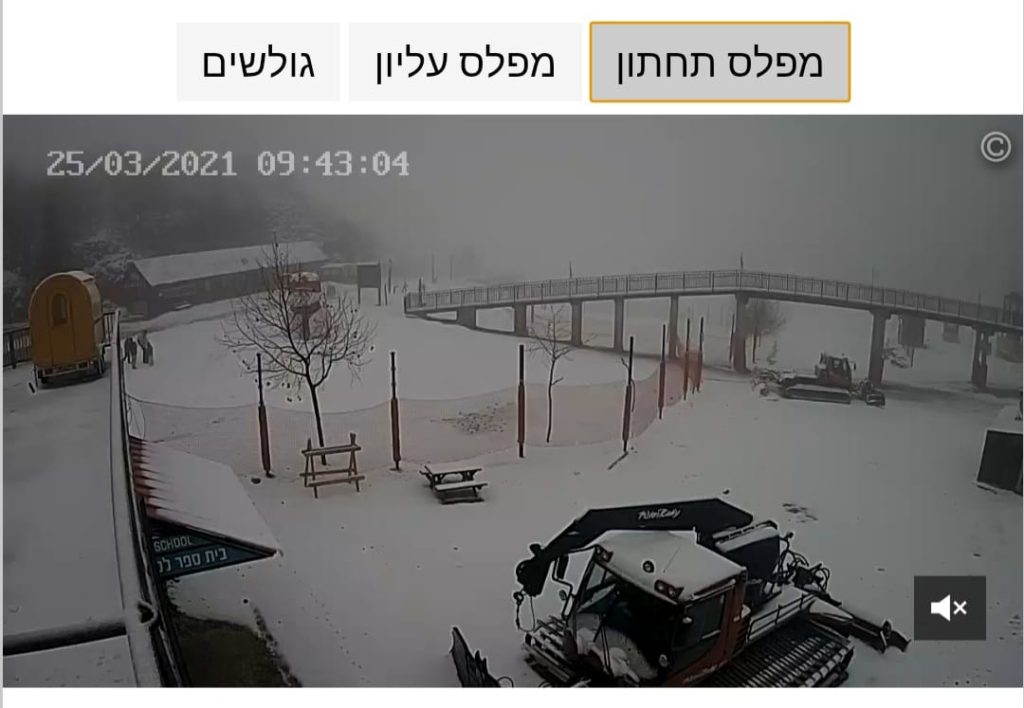 In truth, snow does not affect the calendar, because the calendar is ONLY based off of the aviv barley, and the new moon–but these other groups do not seem to understand that.

26 March 2021, Becca Biderman posts a hilarious video entitled, “Muddy Pilgrim Roads for the Second Passover”, pointing out the hypocrisy of Devorah’s Date Tree, and also Hebrew in Israel (Yoel HaLevi). She shows how they will say whatever seems to support their own biased agendas, and yet they are completely silent when the same circumstances do not support their agendas. (Her understated humor is hilarious.)

1 April 2021, Becca Biderman points out that the wheat is on track for Shavuot (Pentecost) for 18 April 2021 (and NOT the Karaite or Aviv of God calendars).

2 April 2021, Becca Biderman posts another video showing the hypocrisy of Devorah’s Date Tree and the Abib of God calendar groups. Earlier they spoke evil about Becca Biderman’s reports, saying it was too cold and wet to declare the Passover and the Wave Sheaf. But now it is still too cold and wet two days before Devorah’s and Abib of God’s calendars.

09 April 2021, Becca Biderman shows how barley fields in Israel do not ripen uniformly, but in patches. She shows how “Harvestable Fields Theory Leads to Busted Barley.”

08 May 2021, Becca Biderman reports that there are no more firstfruits of wheat, and the Karaite and Abib of God Shavuot dates are still in the future (on 22 May, 2021).