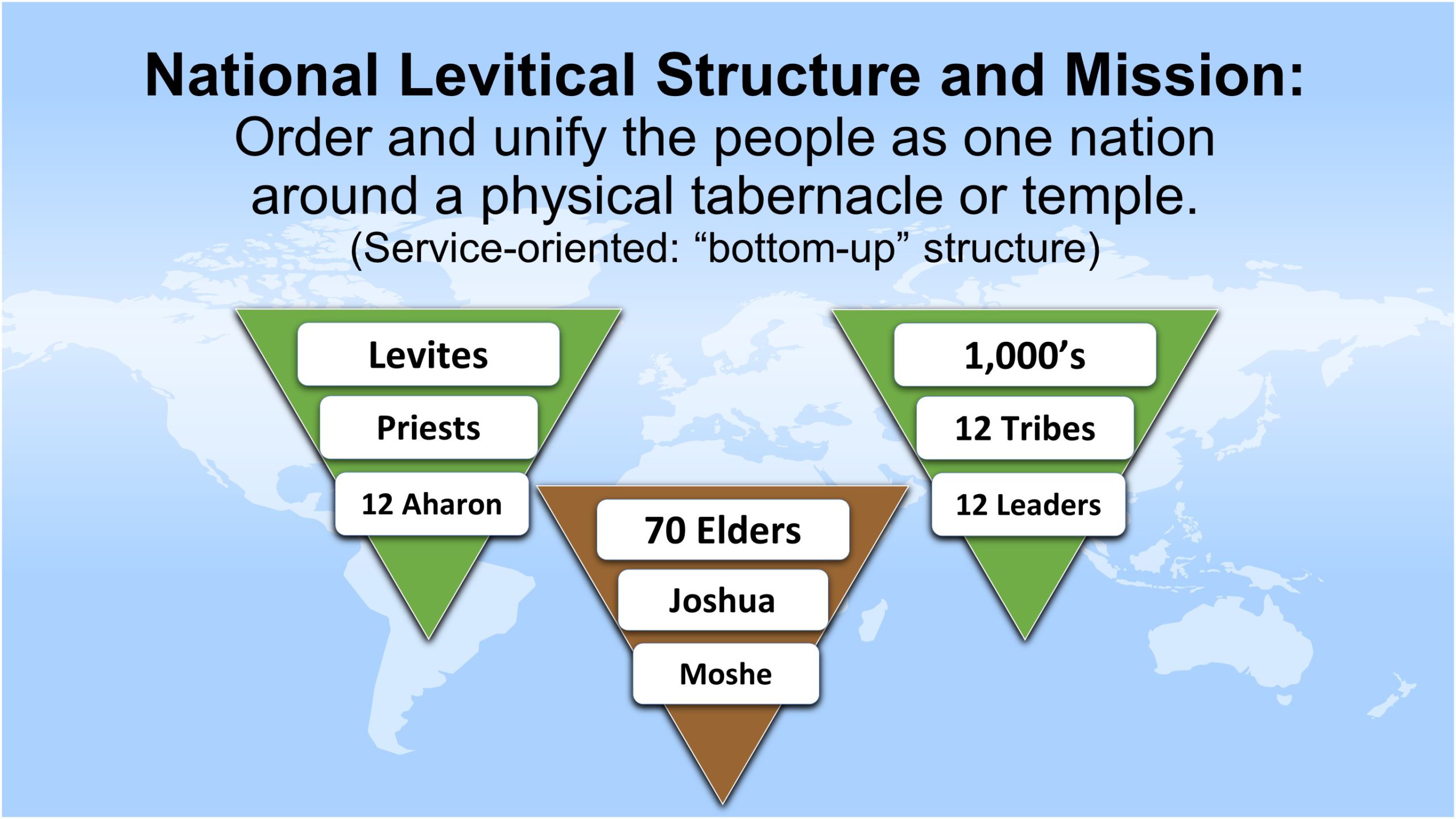 Babylonian governments use pyramidal hierarchies, which normally have a power elite at the top. In contrast, Yeshua told His priesthood that whoever would be great in His kingdom had to make himself the servant of all. (We can visualize this by putting oneself on the bottom of an inverted pyramid.)

Mattityahu (Matthew) 20:25-26
25 But Yeshua called them to Himself and said, “You know that the rulers of the Gentiles lord it over them, and those who are great exercise authority over them.
26 Yet it shall not be so among you; but whoever desires to become great among you, let him be your servant.”

In practical terms, this means we should ask Yahweh how we can help His priesthood establish a worldwide body. Then whatever He gives us to do, we should do with our might, without thought of position or privilege.

Qohelet (Ecclesiastes) 9:10
10 Whatever your hand finds to do, do it with your might; for there is no work or device or knowledge or wisdom in the grave where you are going.

If we will listen and obey His Spirit, Yahweh will show us where we fit in His kingdom, and how we can become a unified body. But to see how the Melchizedekian order is supposed to operate, first let us look at the Levitical order. We will see how the nation was divided and subdivided in order to stay unified and functioning efficiently.

The Levitical priesthood had three tiers (Levites, priests, and high priest). Each tier was also ordered by families.

The people were further ordered by tribes. Each tribe was led by its tribal elder. Each tribe was then further subdivided by ranks of 1000s, 100s, 50s, and 10s. These correspond not only to army units, but also to the idea behind grouping government functions according to federal, state, and local government groupings.

Scripture answers this question. In Ephesians 4, Shaul tells us that Yeshua gave some to be apostles, prophets, evangelists, pastors, and teachers. He did this so the body could eventually become unified.

Yeshua gave these gifts so those who are called to ministry can edify (verse 12) and unify (verse 13) the body of Messiah. Verse 14 promises that if we will do our part, and organize according to these five gifts, then we will no longer be spiritual children (chasing different doctrines). This is because Yeshua’s ministers will end up unifying on what is called the foundation of apostles and prophets (also called the apostolic foundation). 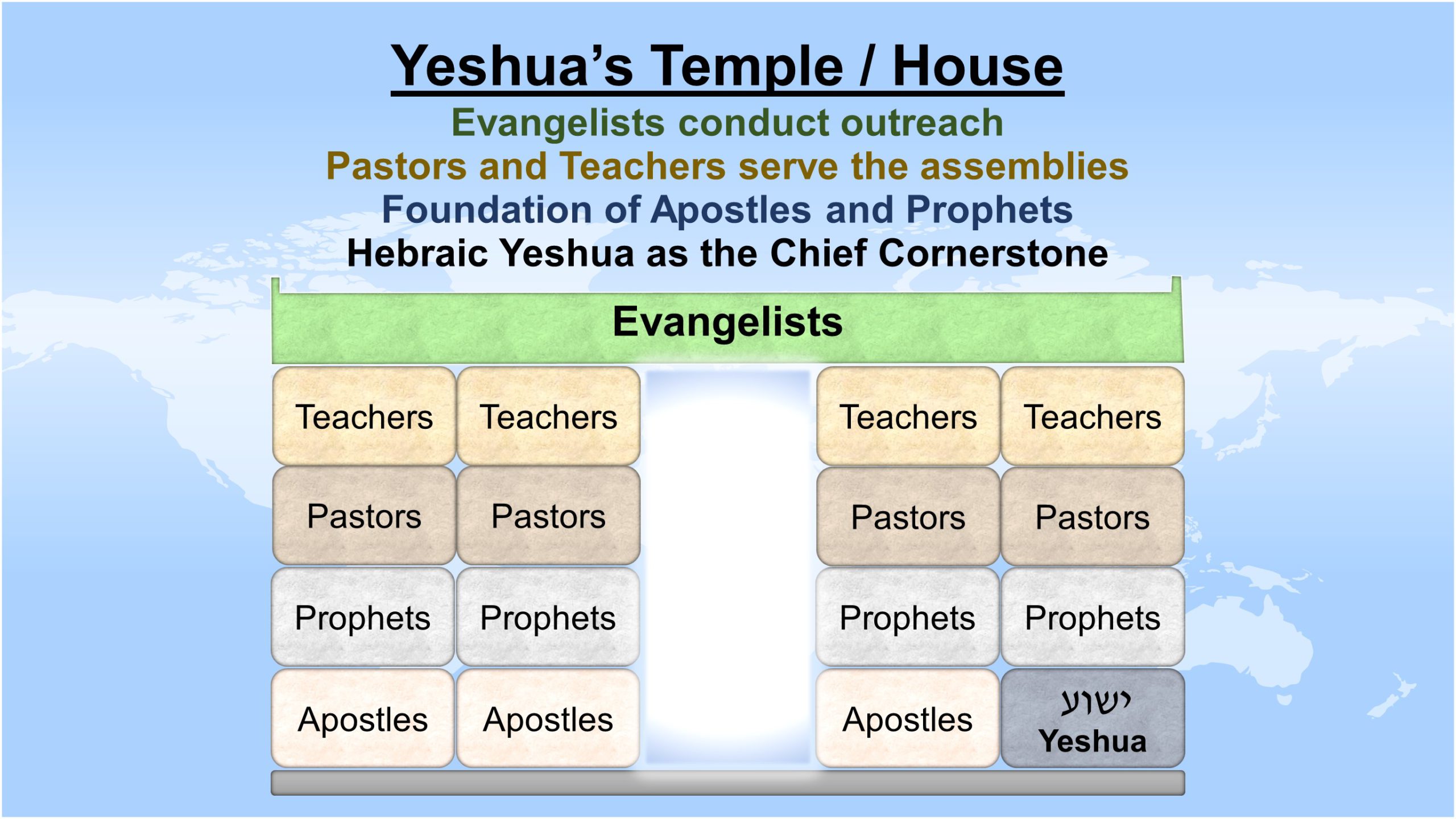 The apostles and prophets form the foundation of Yeshua’s spiritual temple. In the first century, an apostle would travel to a city and share the Good News. If the people received the truth, the apostle would stay until he had raised up a board of elders who could lead the congregation in his absence. 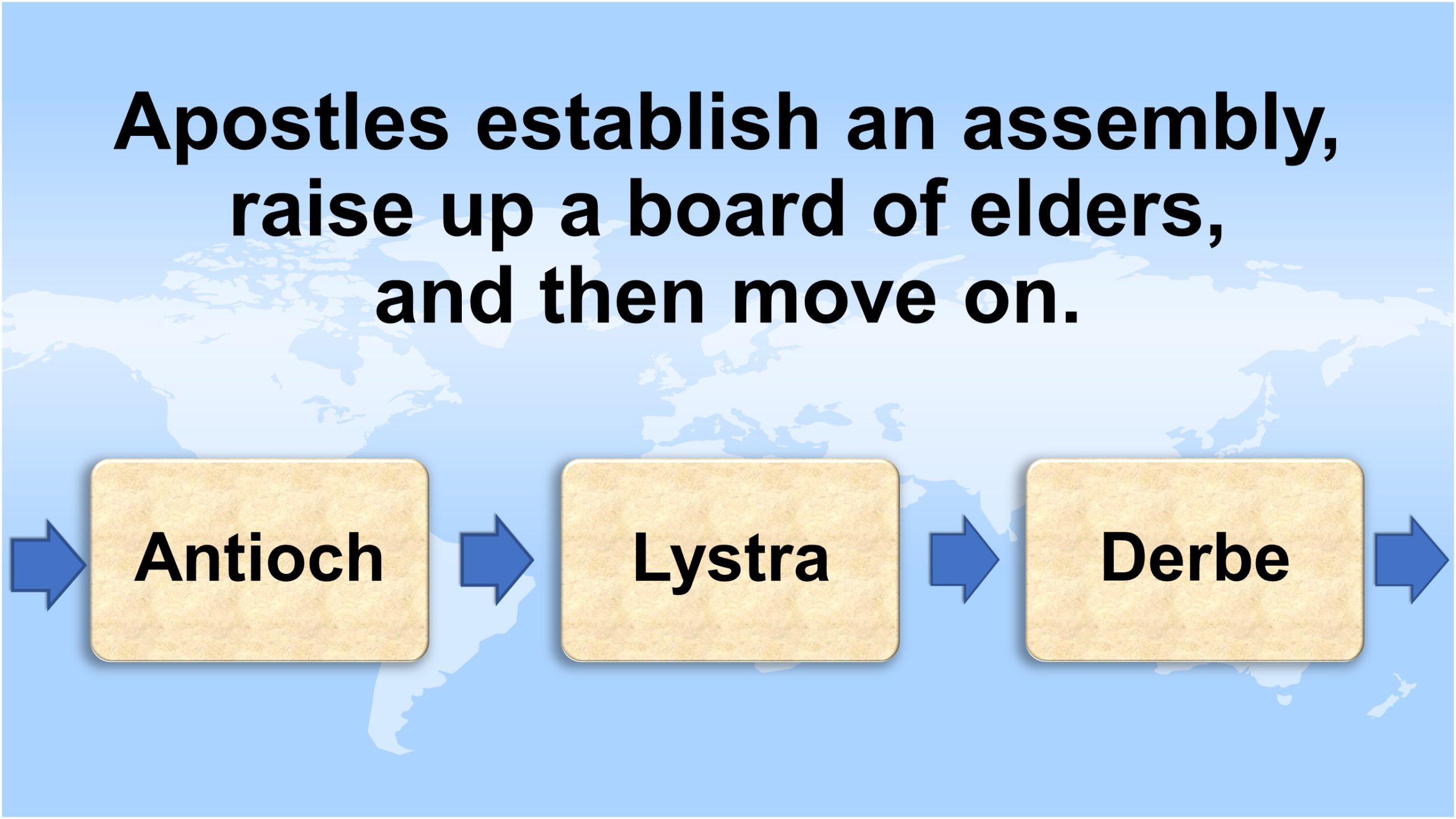 Alternately, apostles could elect to leave the priesthood and become congregational elders.

Today, just as in the first century, congregational elders are to operate in conjunction with the rest of the body by allowing the priesthood to do their job of connecting the assemblies together worldwide. This is the only way the body can operate properly.

While congregational elders often have all the gifts, they typically function as evangelists, pastors, and teachers at the city level (because that is what most people need). Yet no matter what their gifts, their primary duty is to serve as good role models for the flock by giving of their time, money, and talents to further the Great Commission.

Kepha Aleph (1 Peter) 5:1-4
1 The elders who are among you I exhort, I who am a fellow elder and a witness of the sufferings of Messiah, and also a partaker of the glory that will be revealed:
2 Shepherd the flock of Elohim which is among you, serving as overseers, not by compulsion but willingly, not for dishonest gain but eagerly;
3 nor as being lords over those entrusted to you, but being examples to the flock;
4 and when the Chief Shepherd appears, you will receive the crown of glory that does not fade away.

Congregational elders and deacons collect the people’s tithes, which they use to fund the Great Commission in their area. The elders also send a tithe of the tithe to the priesthood, to help them take the Great Commission to other lands. This develops a single body all around the world, which is what Yeshua wants.

Returning to Ephesians 4, we see that the goal is for all of Yeshua’s ministers to submit first to the Spirit, and then to one another in the Spirit. This is the only way all of the various parts of the body can truly come together in love. This is a cleansing process that will take three or four generations.

The second half of verse 14 describes the Babylonian church. Spiritual children are deceived by the trickery of men who mislead them with the cunning craftiness of deceitful plotting. These spiritual children and their deceitful leaders have surrendered to a Babylonian spirit, rather than Yahweh’s Spirit, so they believe all sorts of different things, and form more than one body.

Verse 15 tells us to speak the truth in love. This is a restatement of the second great commandment.

Vayiqra (Leviticus) 19:17-18
17 “You shall not hate your brother in your heart. You shall surely rebuke your neighbor, and not bear sin because of him.
18 You shall not take vengeance, nor bear any grudge against the children of your people, but you shall love your neighbor as yourself: I am Yahweh.”

These verses go together. They describe how to love our neighbors within the body. Yahweh says that in order to truly love the other parts of the body, we must reprove them, and bear no sin because of them. We do this by speaking the truth to them in love. This is a discipline that helps to refine the body, or purge it of those who do not truly have Yeshua’s Spirit.

Ephesim (Ephesians) 2:8-10
8 For by grace you have been saved through faith, and that not of yourselves; it is the gift of Elohim,
9 not of works, lest anyone should boast.
10 For we are His workmanship, created in Messiah Yeshua for good works, which Elohim prepared beforehand that we should walk in them.

This passage makes it clear that our salvation does not come from our own works. Nonetheless, it is our responsibility to walk out our salvation with good works, and the foremost of works is to volunteer of our time, talents, and funds to spread the Good News and fulfill the Great Commission. Shaul said all this and more in Ephesians 4:16, when he said that every part of the body is to do its share. 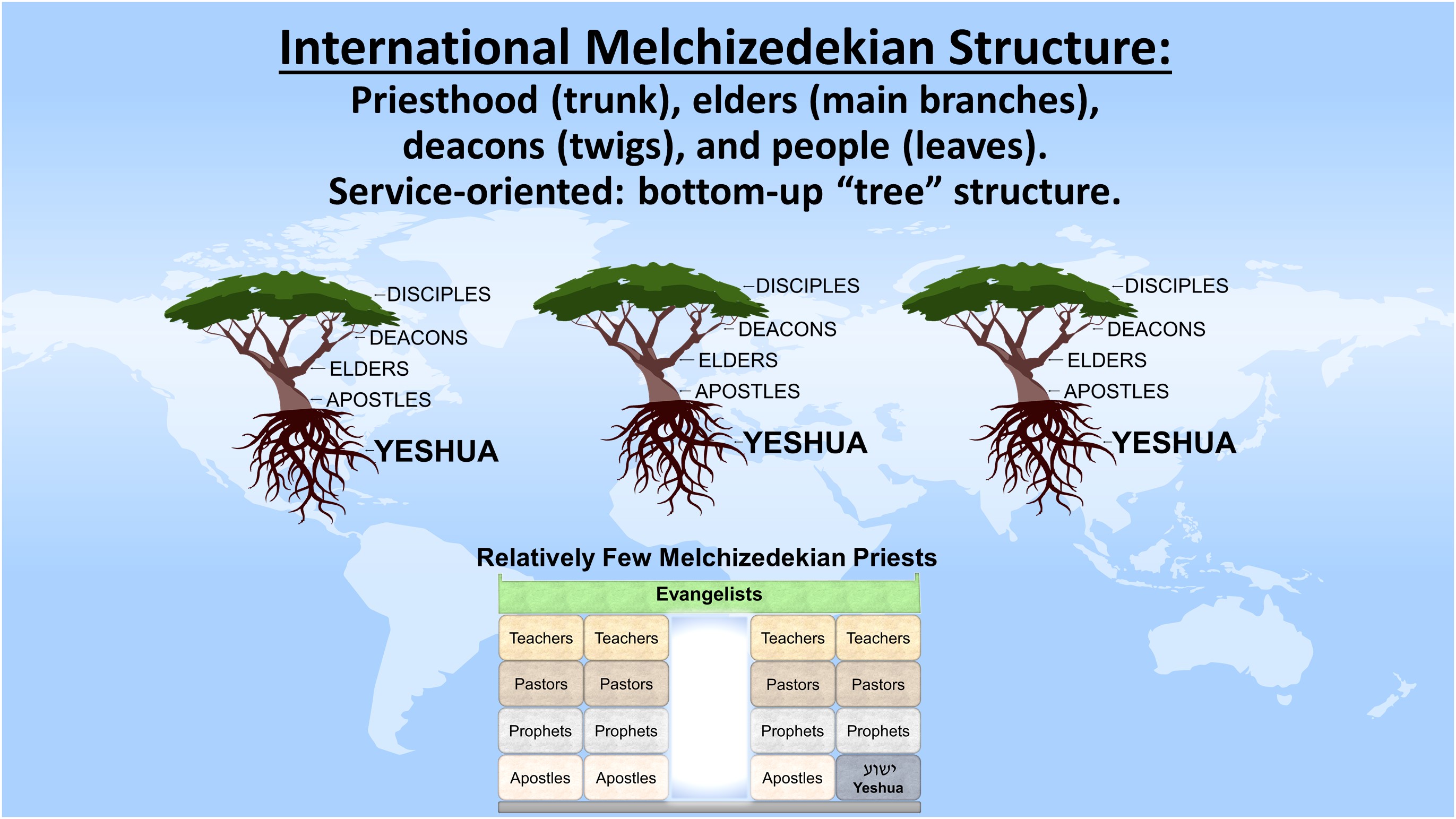 Babylonian governments involve elite rulers at the head of top-down pyramids, but the Melchizedekian structure is the inverse. That is why we used inverted pyramids in the graphic above. Let us also visualize this as an olive tree, with Yeshua as the root, the apostles as the trunk, the congregational elders and deacons as the branches and twigs, and the people as the leaves. 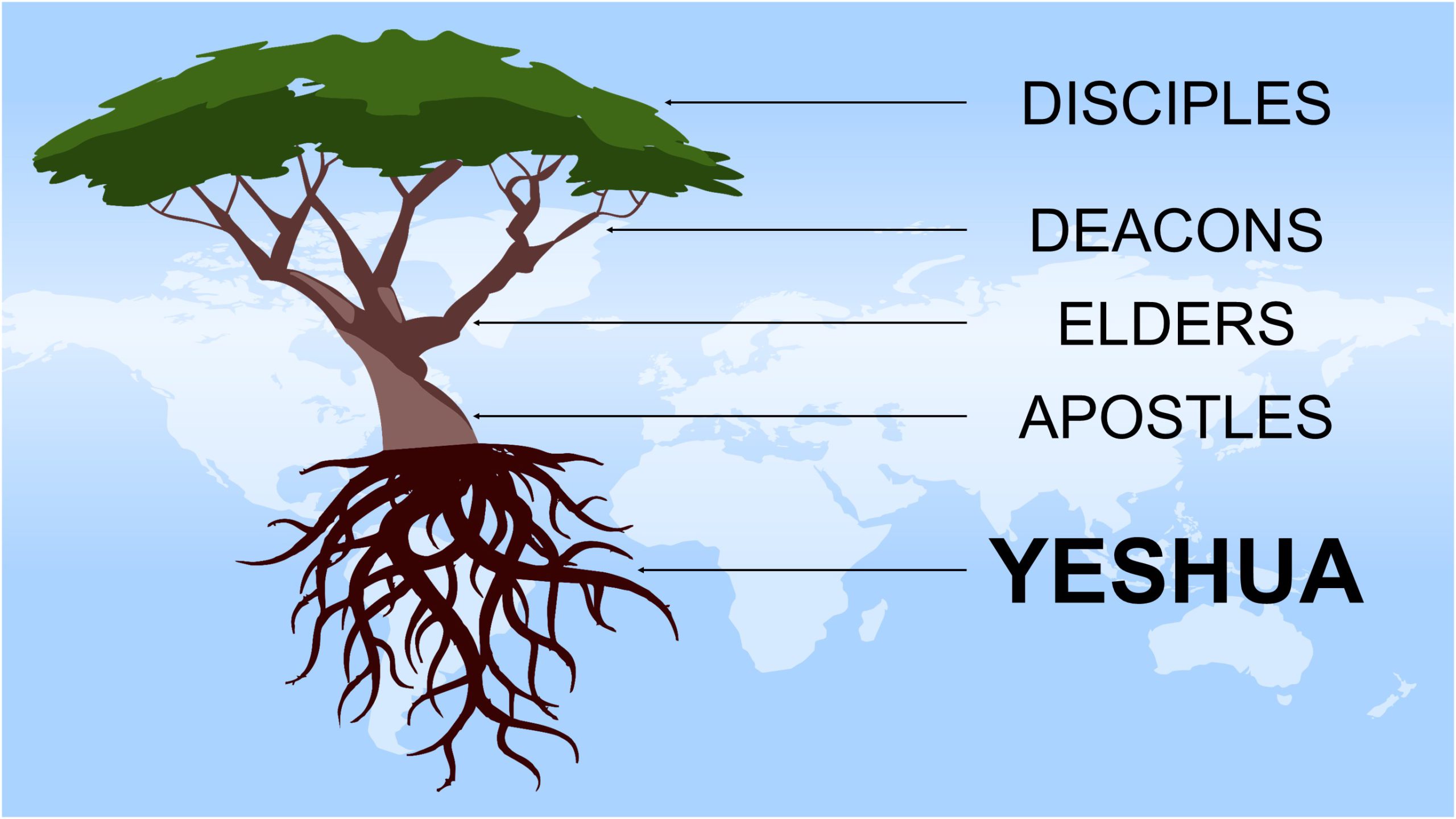 Perhaps modern life moves so fast that we no longer take the time to ponder Yeshua’s words deep within our hearts. But back in the first century, anyone could understand that no matter where we fit in an olive tree, each part of the tree must give its all to the rest of the tree. The root (Yeshua) provides water (Spirit) and nutrients (Torah) from the soil. The trunk (apostles) bears the weight of the tree, and transports the sap (clean doctrine) to the branches (congregational elders). The branches support the twigs (deacons) in their service to the leaves (people).

Since the priesthood and the congregational elders are in service, and since ministry needs support from the people to survive, the people (leaves) are to support the ministry (tree) with their finances. In this way, everyone gives what he can (and pleases Yeshua).

If any part of the tree does not do its part, it becomes withered, and is cut out of the tree.

Yeshua is watching to see who is truly helping to fulfill the Great Commission, and who is not.

Hitgalut (Revelation) 22:12
12 “And behold, I am coming quickly, and My reward is with Me, to give to every one according to his work.”