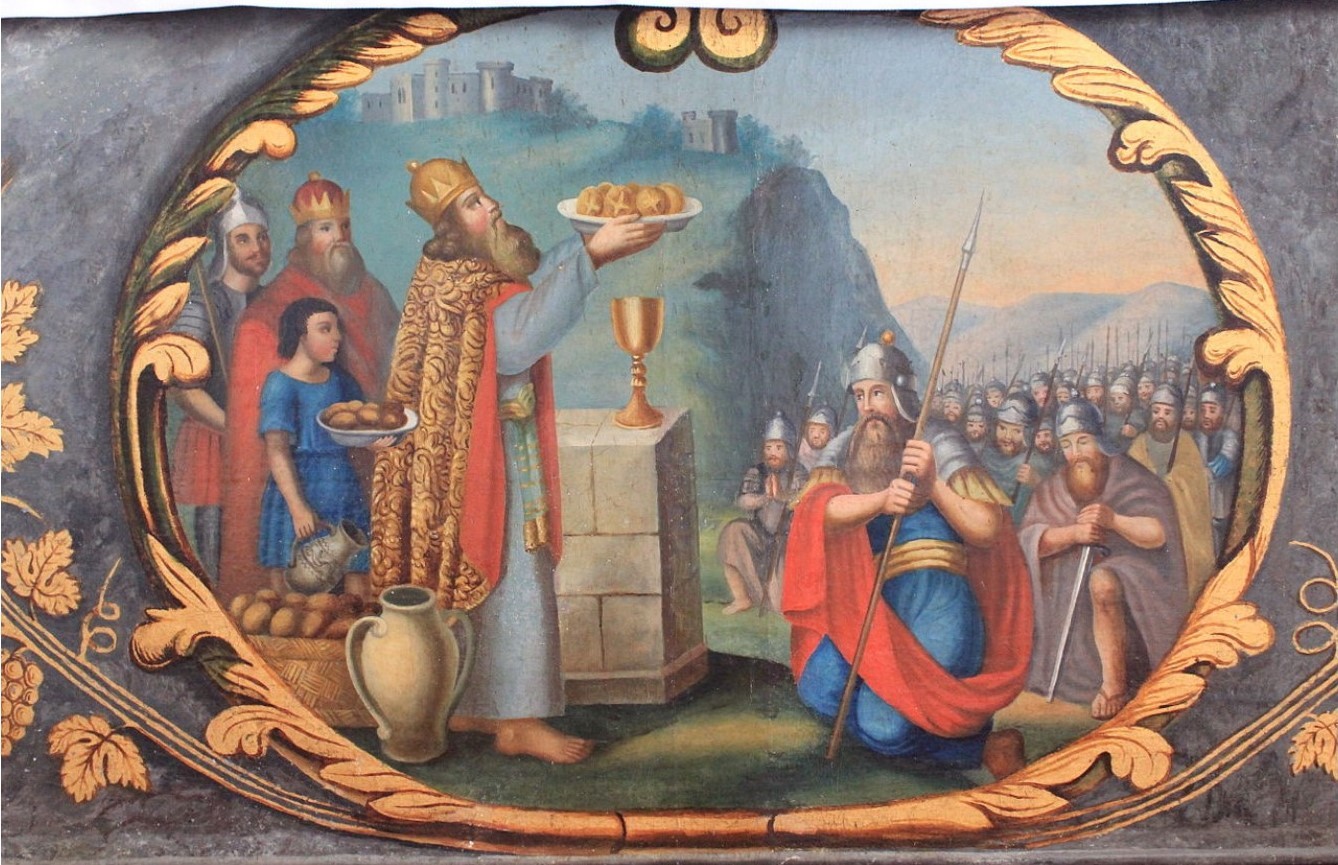 Earlier we saw how Yahweh took Israel from a single family patriarchy in which all three government offices were filled in house, to a single family patriarchy that gave tithes through Melchizedek. Then we saw how Yahweh took Israel into Egypt, to make them a great and mighty nation under an external king, and how He brought Moshe and Aharon to Israel so that all three government offices could again be fulfilled inside the nation (albeit as separate offices). Once all three of these offices were again filled inside the nation, Israel could leave Egypt.

Yahweh then gave Israel the Torah, which instructed Israel to support its new (internal) priesthood. The Torah also instructed the priests to oversee the collection and distribution of the third tithe, which would provide a safety net for the people. In later chapters we will see that Yahweh told Israel they would have a separate king (military leader). However, Israel was not to choose this king with their own human wisdom. Rather, they were to seek the king of Yahweh’s choosing (i.e., let Yahweh choose this king for them).

There can only be one king at a time. If there is more than one king, the nation will follow two different leaders (hence, there will be more than one nation).

Since the Enlightenment (the Luciferism), the distinction between nations and countries has been blurred; but in Scripture, a religious group is a nation (as opposed to a country, which is a land). In Scripture, the nation of Israel consists of those people who worship and obey the Elohim of Israel, irrespective of where they live (which is why we are Nazarene Israelites, even if we don’t have opportunity at present to live in the land of Israel).

When Ruth began worshipping the Elohim of Israel, she became an Israelite at that moment. (She crossed the border and went to her rightful land later.)

Root (Ruth) 1:16
16 But Ruth said: “Entreat me not to leave you, Or to turn back from following after you; For wherever you go, I will go; And wherever you lodge, I will lodge; Your people shall be my people, And your Elohim, my Elohim.”

In Nazarene Israel we saw that King Jeroboam led the northern kingdom of Ephraim away from Solomon’s son King Rehoboam (of the southern kingdom of Judah) and established his own religion (complete with its own priesthood). He intuitively understood that if the people kept going up to Jerusalem each year, their loyalty would ultimately return to King Rehoboam.

Melachim Aleph (1 Kings) 12:26-30
26 And Jeroboam said in his heart, “Now the kingdom may return to the house of David [Judah].
27 If these people go up to offer sacrifices in the house of Yahweh at Jerusalem, then the heart of this people will turn back to their adon, Rehoboam king of Judah; and they will kill me, and go back to Rehoboam, King of Judah.”
28 Therefore the king asked advice, made two calves of gold, and said to the people, “It is too much for you to go up to Jerusalem [for the feasts]. Here are your gods, O Israel, which brought you up from the land of Egypt!”
29 And he set up one in Bethel, and the other he put in Dan.
30 Now this thing became a sin, for the people went to worship before the one as far as Dan.

Judah faced similar issues. In Nazarene Israel we saw that after Ephraim went into the Assyrian dispersion, the Jews went into the exile in Babylon. However, the Torah of Moshe tells the children of Israel to bring their tithes to the place where Yahweh chooses to make His name dwell (which was Jerusalem, not Babylon). Since Judah was in Babylon and there was no temple, the people would have stopped bringing their tithes. No priesthood can long survive without funding, and so the Levitical order would have begun to collapse. Without spiritual leadership the people would soon begin to assimilate, and become spiritually Babylonian. The great men of the day had to find some means of funding the spiritual leadership, so the people would hold onto their Jewish identities—but what?

In the Torah of Moshe, the idea is that Yahweh gave His instructions (Torah) to the children of Israel—and the job of the Levites is to teach Yahweh’s Torah to the people. In return for this service, Yahweh gives the Levites the tithes, gifts, and offerings of the people, so they have the resources they need to do His work. If the Jews hoped to go back to Jerusalem someday, they did not want to change the place of worship in their written Torah scrolls to Babylon (similar to what King Jeroboam had done). Instead, they began teaching that in addition to the written Torah, Yahweh had also given a so-called “Oral Torah” to Israel—and that this alleged Oral Torah was even more authoritative than the written Torah. And even more important, they began teaching not that it was the duty of the Levites to faithfully and carefully teach Yahweh’s Torah, but that instead Yahweh had given the great men (rabbis) of the day the authority to establish what they call “Torah Law” for their generation.

Notice the subtle but critical shift that took place with the formation of the Rabbinical order. Instead of the Levites faithfully carrying out what Yahweh had commanded, now they taught that they had been given the authority to establish “Torah Law” for their times, according to their own understanding. This effectively elevated the rabbis to the position of demigods, whose opinions are at least equal (if not greater) than Yahweh’s.

While the rabbinic teachings were idolatrous, in a sense they were better than nothing, as they provided some form of spiritual continuity while Judah was in exile in Babylon. Had the rabbis gone back to obeying Yahweh’s Torah when they came back to the land, and had they re-established the original Levitical order, then Scripture might paint the rabbis as heroes who rose to the occasion when difficult times demanded it. Yet even after the Jews returned to the land of Israel the rabbis did not step down, and they continued to teach the people to obey them, rather than Yahweh’s Torah. And that is why Yahweh ultimately had to send His Son to overthrow the rabbinical order.

But even if the rabbis had restored the Levitical order, Yeshua would still have had to replace them with a renewed Melchizedekian order. As we saw in the first chapter, Yeshua was sent as Messiah the Prince. His mission was to gather together in one the children of Elohim who were scattered abroad.

Yochanan (John) 11:51-52
51 Now this he did not say on his own authority; but being high priest that year he prophesied that Yeshua would die for the nation,
52 and not for that nation only, but also that He would gather together in one the children of Elohim who were scattered abroad.

In military terms, it was time for the Israelites to stop conducting a defensive war which unified around a physical temple. It was time to take the spiritual offensive, freeing the spiritual captives in all nations to worship Yahweh, and keep His Torah (rather than a substitute one).

Luqa (Luke) 4:18
18 “The Spirit of Yahweh is upon Me, Because He has anointed Me To preach the Good News to the poor; He has sent Me to heal the brokenhearted, To proclaim liberty to the captives And recovery of sight to the blind, To set at liberty those who are oppressed….”

The rabbis expected Messiah the Prince to come as a military commander. However, they did not realize that part of His mission was to set at liberty those who were oppressed by their Babylonian rabbinic spirit (which taught the people to obey the voice of the rabbis, rather than the voice of Yahweh).

Remembering that Yahweh works generationally, let us examine the progression of priesthoods up to Yeshua’s first coming.

When Elohim overthrew the rabbinical order, He raised up a renewed Melchizedekian order so there would still be someone to make sacrifices and offerings for the people. As we will see, this renewed Melchizedekian priesthood is the Nazarene Israelite priesthood. This is a huge leap forward in the development of the three leadership offices, because Melchizedekian apostles are able to fill all three offices of government.