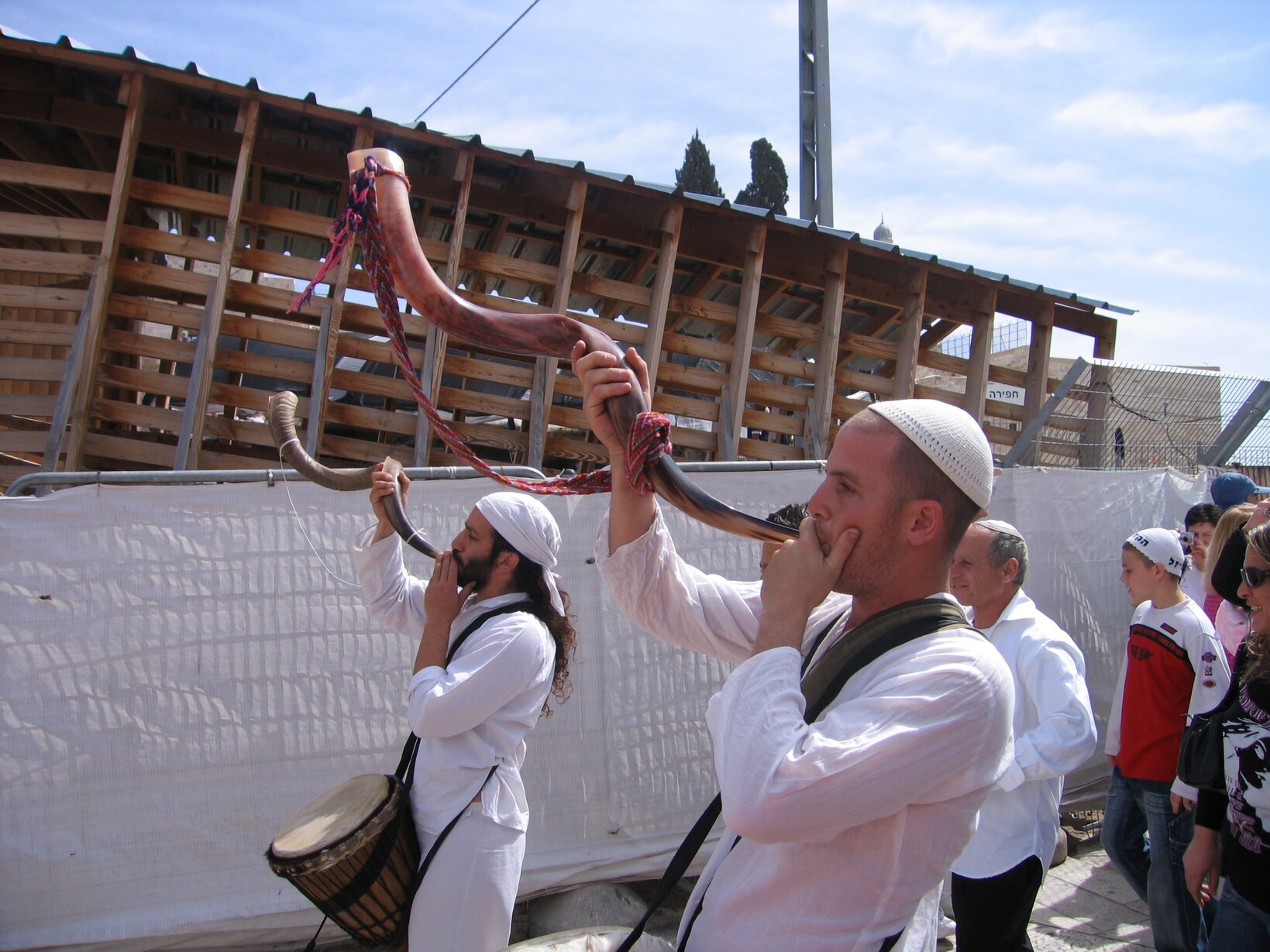 Men do not repent during the first four trumpets. Therefore, Yahweh has to turn up the heat. This is why the last three trumpets (5, 6, and 7) are all described as woes.

At trumpet 5, a “star” falls to earth, and is given the key to the bottomless pit. This cannot be a physical star; it is most likely a demon. “Locusts” are released, and for five months they torment all but the 144,000 (who are sealed from harm through trumpet 5).

Hitgalut (Revelation) 9:1-6
1 Then the fifth messenger sounded: And I saw a star fallen from heaven to the earth. To him was given the key to the bottomless pit.
2 And he opened the bottomless pit, and smoke arose out of the pit like the smoke of a great furnace. So the sun and the air were darkened because of the smoke of the pit.
3 Then out of the smoke locusts came upon the earth. And to them was given power, as the scorpions of the earth have power.
4 They were commanded not to harm the grass of the earth, or any green thing, or any tree, but only those men who do not have the seal of Elohim on their foreheads.
5 And they were not given authority to kill them, but to torment them for five months. Their torment was like the torment of a scorpion when it strikes a man.
6 In those days men will seek death and will not find it; they will desire to die, and death will flee from them.

Later we will see that gold symbolizes the Babylonian empire, while iron symbolizes the Roman Empire (which is an outgrowth of the Babylonian system). The locusts have crowns of gold (Babylon), and breastplates of iron (Rome). This means they serve the Babylonian-Roman Empire system. They are shaped like horses prepared for battle. This may mean they are some form of government troop vehicle used to oppress people. Their power is to hurt men for five months. This is probably a literal five months because the tribulation only lasts for seven years.

Hitgalut (Revelation) 9:7-12
7 The shape of the locusts was like horses prepared for battle. On their heads were crowns of something like gold [symbolic of Babylon], and their faces were like the faces of men.
8 They had hair like women’s hair, and their teeth were like lions’ teeth.
9 And they had breastplates like breastplates of iron [symbolic of Rome], and the sound of their wings was like the sound of chariots with many horses running into battle.
10 They had tails like scorpions, and there were stings in their tails. Their power was to hurt men five months.
11 And they had as king over them the messenger of the bottomless pit, whose name in Hebrew is Abaddon [destroyer], but in Greek he has the name Apollyon [destroyer].
12 One woe is past. Behold, still two more woes are coming after these things.

Some suggest this prophecy was fulfilled by the Islamic Saracens who terrorized Christians in the Middle Ages. This is incorrect because this is still a future prophecy. However, later we will see that the Muslims are related both to Babylon and to Rome; therefore, the locusts could represent an Islamic foe of some kind. Their king is called “destroyer” in verse 11, and Islam does seem to focus on destroying things they find blasphemous.

At trumpet 6, four messengers are released to kill a third of mankind. The earthly agent of this destruction is a two hundred million man army.

Hitgalut (Revelation) 9:13-21
13 Then the sixth messenger sounded: And I heard a voice from the four horns of the golden altar which is before Elohim,
14 saying to the sixth messenger who had the trumpet, “Release the four messengers who are bound at the great river Euphrates.”
15 So the four messengers, who had been prepared for the hour and day and month and year, were released to kill a third of mankind.
16 Now the number of the army of the horsemen was two hundred million; I heard the number of them.
17 And thus I saw the horses in the vision: those who sat on them had breastplates of fiery red, hyacinth blue, and sulfur yellow; and the heads of the horses were like the heads of lions [symbolic of Babylon]; and out of their mouths came fire, smoke, and brimstone.
18 By these three plagues a third of mankind was killed — by the fire and the smoke and the brimstone which came out of their mouths.
19 For their power is in their mouth and in their tails; for their tails are like serpents, having heads; and with them they do harm.
20 But the rest of mankind, who were not killed by these plagues, did not repent of the works of their hands, that they should not worship demons, and idols of gold, silver, brass, stone, and wood, which can neither see nor hear nor walk.
21 And they did not repent of their murders or their sorceries or their sexual immorality or their thefts.

Some say this passage refers to China’s army, which is literally 200 million men strong (with reserves). Others say this refers to the combined Muslim armies of the world. The latter seems more likely, as Scripture’s focus is primarily on the Middle East, and the four messengers are bound at the River Euphrates (Phrat) in modern day Iraq, Syria, and eastern Turkey. This 200 million man army also shows that while the UN will likely gain control of the Middle East after trumpet 6, they will not establish a lasting world government (or there would be no war).

Then in Revelation 10, another messenger (who may be Yeshua) cries out. When He cries out, 7 thunders utter their voices; however, what they say is not recorded for us.

Hitgalut (Revelation) 10:1-4
1 I saw still another mighty messenger coming down from heaven, clothed with a cloud. And a rainbow was on his head, his face was like the sun, and his feet like pillars of fire.
2 He had a little book open in his hand. And he set his right foot on the sea and his left foot on the land,
3 and cried with a loud voice, as when a lion roars. When he cried out, seven thunders uttered their voices.
4 Now when the seven thunders uttered their voices, I was about to write; but I heard a voice from heaven saying to me, “Seal up the things which the seven thunders uttered, and do not write them.”

Scripture is a record of how the bride (Israel) gives birth to a man child (redeemed Israel). If the believers are the bride, the seals represent the time the bride’s belly swells with her pregnancy (over hundreds of years). The trumpets (tribulation) represent her birth pangs (which last seven years). The seven thunders represent her cries of pain. Because the seven thunders are sealed, we do not have a description of what to expect. We can be sure, however, that it will be an intense time of travail. (This may be when the 144,000 die and are taken to heaven.)

Next, the Messenger (Yeshua) swears that the mystery of Elohim will be finished when trumpet 7 sounds.

We won’t read about trumpet 7 until Revelation 11:15; however, when we get there we will see that the mystery of Elohim ends when the Babylonian system falls, and Elohim’s kingdom is established on earth.

The Messenger tells John to eat the little book (which is probably Scripture). He also tells John he must prophesy again about many peoples, nations, tongues, and kings.

This probably means that at trumpet 7, Elohim will again give His people a kingship.

Hitgalut (Revelation) 10:8-11
8 Then the voice which I heard from heaven spoke to me again and said, “Go, take the little book which is open in the hand of the messenger who stands on the sea and on the earth.”
9 So I went to the messenger and said to him, “Give me the little book.” And he said to me, “Take and eat it; and it will make your stomach bitter, but it will be as sweet as honey in your mouth.”
10 Then I took the little book out of the messenger’s hand and ate it, and it was as sweet as honey in my mouth. But when I had eaten it, my stomach became bitter.
11 And he said to me, “You must prophesy again about many peoples, nations, tongues, and kings.”

Why do there need to be any further prophecies about kings? Later we will see that when we return to the land of Israel, we will once more be ruled by a prince. Contrary to popular belief, this prince will not be Yeshua, because the prince will offer sin sacrifices for himself (as well as for all of the people of the land).

Yehezqel (Ezekiel) 45:22
22 And on that day the prince shall prepare for himself and for all the people of the land a bull for a sin offering.

We discuss the renewed kingship in Torah Government.