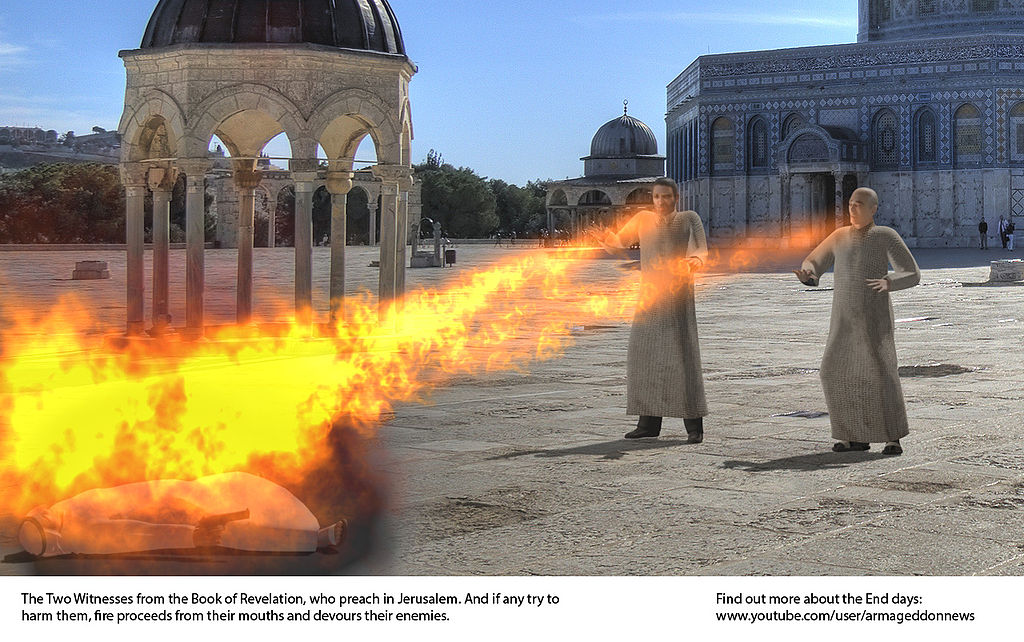 Before we read about the third woe (trumpet 7) and the cup judgments it introduces, we will meet Yahweh’s two witnesses. They minister during all three woes (trumpets 5, 6, and 7). This is also called the time of Jacob’s Trouble.

Earlier we saw how the Illuminati is working to engineer a nuclear war in the Middle East at seal 6, which has the purpose of generating widespread public support for a one world government. This will lead to the pope setting up a temple on the Temple Mount, in which Christians, Jews, and Muslims will all worship side by side. During this time we can also expect the outer courtyard to be open to all of the gentile religions of the world for 42 months (3 1/2 years). During these 42 months, the two witnesses will have the authority to withhold rain, and to smite whomever they please with plagues. At the end of that time, the beast (Satan) will kill them; yet after 3 1/2 literal days the two witnesses will be resurrected and called up to heaven. Let’s read the passage before we study it.

Hitgalut (Revelation) 11:1-14
1 Then I was given a reed like a measuring rod. And the messenger stood, saying, “Rise and measure the temple of Elohim, the altar, and those who worship there.
2 But leave out the court which is outside the temple, and do not measure it, for it has been given to the Gentiles. And they will tread the set-apart city underfoot for forty-two months [3 1/2 years].
3 And I will give power to my two witnesses, and they will prophesy one thousand two hundred and sixty days [42 months or 3 1/2 years], clothed in sackcloth.”
4 These are the two olive trees and the two lampstands standing before the Elohim of the earth.
5 And if anyone wants to harm them, fire proceeds from their mouth and devours their enemies. And if anyone wants to harm them, he must be killed in this manner.
6 These have power to shut heaven, so that no rain falls in the days of their prophecy; and they have power over waters to turn them to blood, and to strike the earth with all plagues, as often as they desire.
7 When they finish their testimony, the beast [Satan] that ascends out of the bottomless pit will make war against them, overcome them, and kill them.
8 And their dead bodies will lie in the street of the great city which spiritually is called Sodom and Egypt, where also our Adon was crucified [i.e., Jerusalem].
9 Then those from the peoples, tribes, tongues, and nations will see their dead bodies three-and-a-half days, and not allow their dead bodies to be put into graves.
10 And those who dwell on the earth will rejoice over them, make merry, and send gifts to one another, because these two prophets tormented those who dwell on the earth.
11 Now after the three-and-a-half days the breath of life from Elohim entered them, and they stood on their feet, and great fear fell on those who saw them.
12 And they heard a loud voice from heaven saying to them, “Come up here.” And they ascended to heaven in a cloud, and their enemies saw them.
13 In the same hour there was a great earthquake, and a tenth of the city fell. In the earthquake seven thousand people were killed, and the rest were afraid and gave glory to the Elohim of heaven.
14 The second woe is past. Behold, the third woe is coming quickly.

Yeshayahu (Isaiah) 43:10
10 “You are My witnesses,” says Yahweh, “And My servant whom I have chosen, That you may know and believe Me, And understand that I am He. Before Me there was no Elohim formed, Nor shall there be after Me.”

In Daniel we learn that from the going forth of the command to restore and build Jerusalem, there would be 7 weeks plus 62 weeks until Messiah the Prince.

That is, there would be 69 “weeks” of years. The Hebrew word here is shevua, which refers simply to a set of seven.

King Artaxerxes gave this command in 457 BCE. From that date, there would be 69 x 7 = 483 years until Messiah, who began His ministry circa 26 CE. Verse 26 tells us that Yeshua would be cut off, but not for Himself (i.e., not for His own sins).

The narrative clearly speaks of Yeshua up to this point. However, some believe verse 26 speaks of the anti-messiah (the papacy).

Daniel 9:26
26 “And after the sixty-two weeks Messiah shall be cut off, but not for Himself; And the people of the prince who is to come [The Roman general Titus] Shall destroy the city and the sanctuary. The end of it shall be with a flood [future event], And till the end of the war desolations are determined.”

The Roman general Titus destroyed the city and the sanctuary, but there was no flood in the first century (either literal or spiritual). Therefore, this must still be a future event.

Verse 27 may also speak of the coming anti-messiah.

Daniel 9:27
27 “Then he [anti-messiah] shall confirm a covenant with many for one week [seven]; But in the middle of the week [seven] he [anti-messiah] shall bring an end to sacrifice and offering. And on the wing of abominations shall be one who makes desolate [Mahdi?], Even until the consummation [wedding feast/Armageddon], which is determined, Is poured out on the desolate.”

Some people believe that verse 27 refers to Yeshua, but Yeshua confirmed a covenant for all time (and not just for one week). Therefore, verse 27 also seems to refer to the anti-messiah, who will confirm a covenant with many for one “seven” (i.e., a seven year period). This may be accompanied by sacrifices and offerings; however, in the middle of the seven (i.e., at the 3 1/2 year mark), the anti-messiah will bring an end to these sacrifices and offerings. The two witnesses will also begin their ministry about this time (for 3 1/2 years), which will take us to the end of the 7 years of tribulation.

Verse 27 also refers to “one who makes desolate.” This may be a reference to the Islamic Mahdi (the so-called Islamic messiah), who has a close working relationship with the pope.

Revelation tells us that the two witnesses are raised from the dead after 3 1/2 days.

Hitgalut (Revelation) 11:11
11 Now after the three-and-a-half days the breath of life from Elohim entered them, and they stood on their feet, and great fear fell on those who saw them.

Hitgalut (Revelation) 11:13
13 In the same hour there was a great earthquake, and a tenth of the city fell. In the earthquake seven thousand people were killed, and the rest were afraid and gave glory to the Elohim of heaven.

When the two witnesses are resurrected, there is sure to be societal upheaval. Some will give glory to Elohim, but apparently things won’t have changed enough to convince Yahweh to turn back the third woe, which begins at trumpet 7.