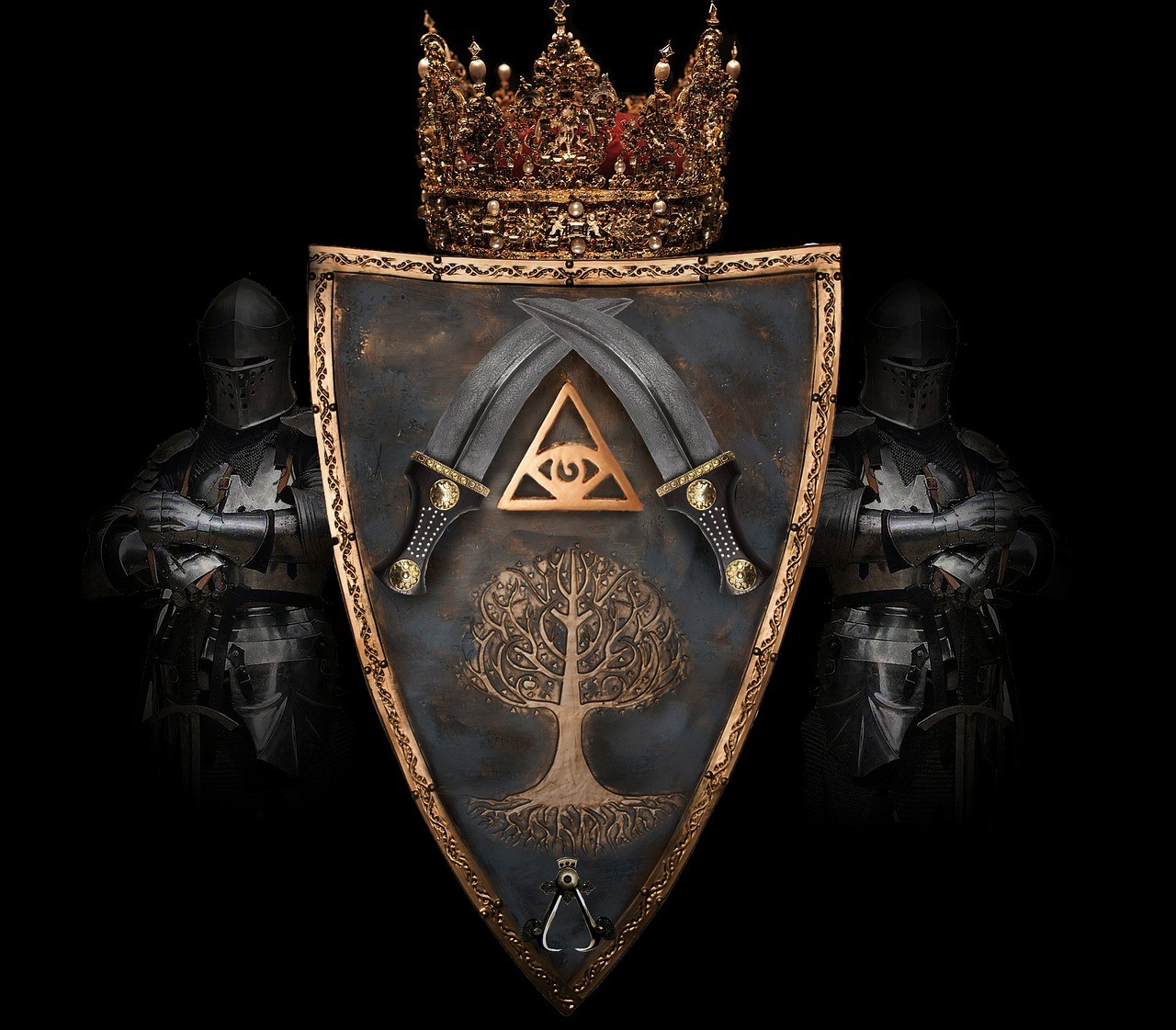 In Revelation 16, Babylon fell, and three unclean spirits like frogs came from the mouths of the dragon (Satan), the beast (the papacy), and the false prophet (Islam). These three spirits then went to marshal all of the armies of the world against Israel at Armageddon. By this we know that the forces which will come against Israel at Armageddon will be comprised of Babylonian Christians, Muslims, and secular nations (from all over the world).

Hitgalut (Revelation) 16:13-16
13 And I saw three unclean spirits like frogs coming out of the mouth of the dragon [Satan], out of the mouth of the beast [Papacy], and out of the mouth of the false prophet [Muhammad].
14 For they are spirits of demons, performing signs, which go out to the kings of the earth and of the whole world, to gather them to the battle of that great day of Elohim El Shaddai.
15 “Behold, I am coming as a thief. Blessed is he who watches, and keeps his garments, lest he walk naked and they see his shame.”
16 And they gathered them together to the place called in Hebrew, Har Megiddo [Armageddon].

We also saw that Armageddon is the first war of Gog and Magog. Ezekiel 39 tells us that Gog will be brought against Israel “from the far north.”

Yehezqel (Ezekiel) 39:1-2
1 “And you, son of man, prophesy against Gog, and say, ‘Thus says Yahweh Elohim: “Behold, I am against you, O Gog, the prince of Rosh, Meshech, and Tubal;
2 and I will turn you around and lead you on, bringing you up from the far north, and bring you against the mountains of Israel.”

But if the armies of Gog and Magog come from all over the world, then how can Gog come from the far north? To understand this, let us understand the difference between physical and prophetic directions.

In prophecy, the north refers to the north side of a hill, which is shaded from the sun (and therefore, what takes place there is concealed from view). In Nazarene Israel we explain how the house of Israel (Ephraim) was taken into captivity in Assyria, which lies to the north of Israel (both physically and prophetically). The ten tribes of Israel then lost their identities and became lost to history (because they were shaded from view). This explains how Ephraim and Judah will come back to the land of Israel after Armageddon—they will come back from the prophetic north, where they (and their identities) have been hidden for so long.

In contrast, Yeshua tells us that many will come from the physical east and the physical west, and sit down with Avraham, Yitzhak (Isaac), and Ya’akov (Jacob) in the kingdom of heaven.

Mattityahu (Matthew) 8:11
11 “And I say to you that many will come from east and west, and sit down with Avraham, Yitzhak and Ya’akov in the kingdom of heaven.”

When the thousand year millennium expires, Satan will be released from his prison, and will marshal all of the armies of the world (from the physical four corners of the earth) against Israel.

Hitgalut (Revelation) 20:7-8
7 Now when the thousand years have expired, Satan will be released from his prison
8 and will go out to deceive the nations which are in the four corners of the earth, Gog and Magog, to gather them together to battle, whose number is as the sand of the sea.

This is described in Ezekiel 38 as the second war of Gog and Magog.

Yehezqel (Ezekiel) 38:8-9
8 “After many days you will be visited. In the latter years you will come into the land of those brought back from the sword and gathered from many people on the mountains of Israel, which had long been desolate; they were brought out of the nations, and now all of them dwell safely.
9 You will ascend, coming like a storm, covering the land like a cloud, you and all your troops and many peoples with you.”

Even though Gog’s armies come from all nations, verse 15 confirms that they come from the far north.

Yehezqel (Ezekiel) 38:15
15 “Then you will come from your place out of the far north, you and many peoples with you, all of them riding on horses, a great company and a mighty army.”

Verse 22 tells us that Gog will be destroyed by fire and brimstone.

Yehezqel (Ezekiel) 38:22
22 “And I will bring him to judgment with pestilence and bloodshed; I will rain down on him, on his troops, and on the many peoples who are with him, flooding rain, great hailstones, fire, and brimstone.”

This is the same event as in Revelation 20:9.

Hitgalut (Revelation) 20:9
9 They went up on the breadth of the earth and surrounded the camp of the saints and the beloved city. And fire came down from Elohim out of heaven and devoured them.

This is just one more instance of Yahweh working in patterns. The same kind of event took place in Genesis 19:24, where Yeshua called down fire and brimstone on Sodom and Gomorrah from Yahweh the Father in the heavens.

B’reisheet (Genesis) 19:24
24 Then Yahweh [the Son] rained brimstone and fire on Sodom and Gomorrah, from Yahweh [the Father] out of the heavens. 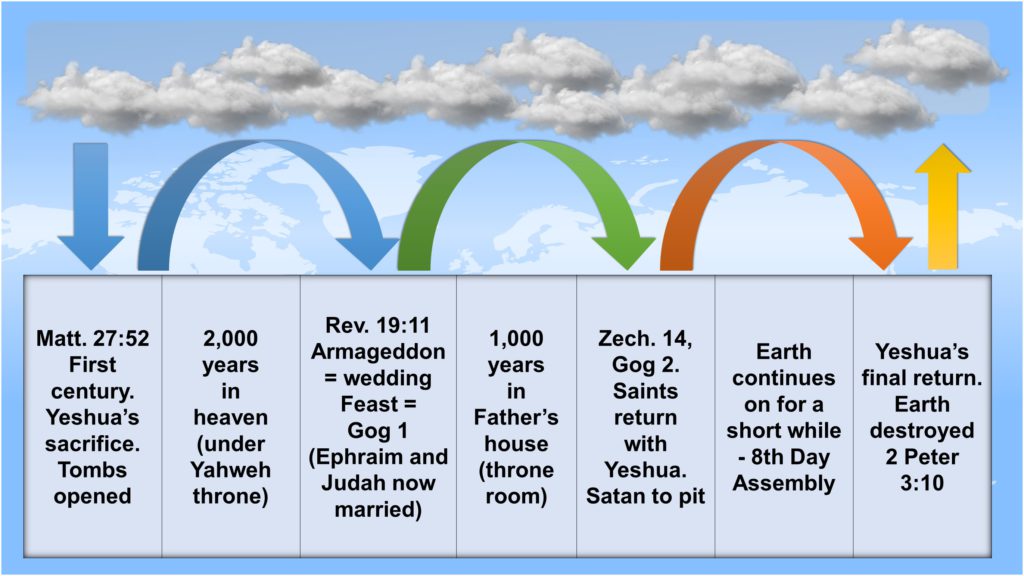 As we explain in The Torah Calendar, if a prophetic day is as a thousand years (2 Peter 3:8), then the prophetic meaning of the seven full days of the Feast of Sukkot (Tabernacles) is that the earth will last for seven full days (a full seven thousand years), and then a little more. This is why we gather on the morning of Shemini Atzeret (the Eighth Day Assembly). Once the seven thousand years are over, we will tarry for a little while, until Yeshua’s last and final return, when the earth is burned up.