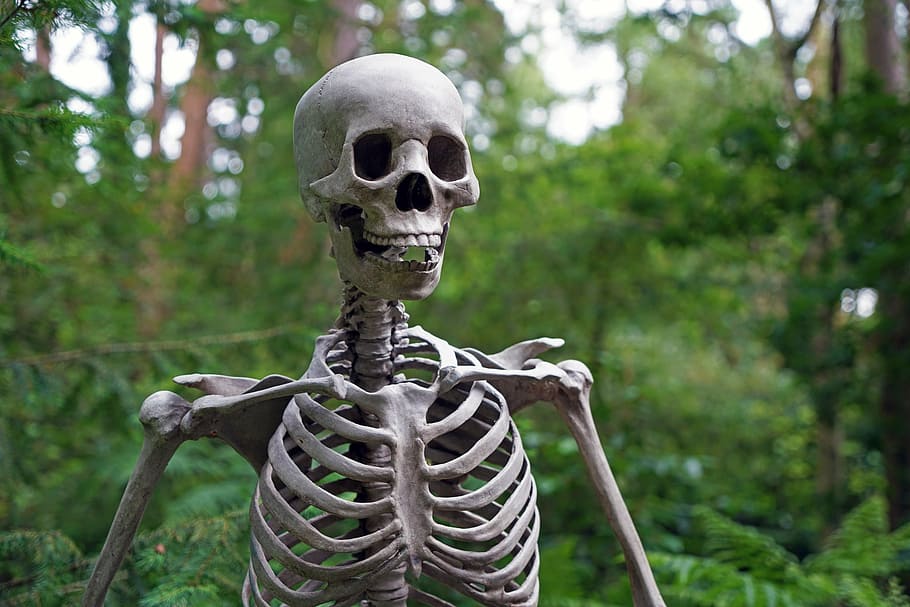 Yehezqel (Ezekiel) 37:1-7
1 The hand of Yahweh came upon me and brought me out in the Spirit of Yahweh, and set me down in the midst of the valley; and it was full of bones.
2 Then He caused me to pass by them all around, and behold, there were very many in the open valley; and indeed they were very dry.
3 And He said to me, “Son of man, can these bones live?” So I answered, “O Adonai Yahweh, You know.”
4 Again He said to me, “Prophesy to these bones, and say to them, ‘O dry bones, hear the word of Yahweh!
5 Thus says Yahweh Elohim to these bones: “Surely I will cause breath [spirit] to enter into you, and you shall live.
6 I will put sinews on you and bring flesh upon you, cover you with skin and put breath [spirit] in you; and you shall live. Then you shall know that I am Yahweh.”‘”
7 So I prophesied as I was commanded; and as I prophesied, there was a noise, and suddenly a rattling [רעש]; and the bones came together, bone to bone.

In verse 7, the word rattling is ra’ash (רעש). This word is also correctly translated earthquake (which is how the word is translated in Modern Hebrew).

Earlier we saw that earthquakes represent changes (or shake-ups) in society. Revelation lists earthquakes at seal 6, seal 7, trumpet 7, and cup 7. It may be that there are minor fulfillments at each of the first three junctures. That is, at seal 6, seal 7, and also at trumpet 7, some Ephraimites will seek more truth. The major fulfillment will take place at or just after cup 7, at Armageddon (the wedding feast).

There is also a symbolic value here, in that the bones represent the leadership of the house of Ephraim. The meaning might be that at each “societal shake-up” a few more leaders awaken to their Ephraimite identities, and start coming together. However, the major fulfillment will take place at cup 7 (Armageddon), as the mass of the Ephraimite people realize their identities. This is also when the “army” of the house of Ephraim is restored. The passage continues:

Yehezqel (Ezekiel) 37:8-14
8 Indeed, as I looked, the sinews and the flesh came upon them, and the skin covered them over; but there was no breath in them.
9 Also He said to me, “Prophesy to the breath [spirit], prophesy, son of man, and say to the breath [spirit], ‘Thus says Yahweh Elohim: “Come from the four winds, O breath [spirit], and breathe on these slain, that they may live.”‘”
10 So I prophesied as He commanded me, and breath came into them, and they lived, and stood upon their feet, an exceedingly great army.
11 Then He said to me, “Son of man, these bones are the whole house of Israel. They indeed say, ‘Our bones are dry, our hope is lost, and we ourselves are cut off!’
12 Therefore prophesy and say to them, ‘Thus says Yahweh Elohim: “Behold, O My people, I will open your graves and cause you to come up from your graves, and bring you into the land of Israel.
13 Then you shall know that I am Yahweh, when I have opened your graves, O My people, and brought you up from your graves.
14 I will put My Spirit in you, and you shall live, and I will place you in your own land. Then you shall know that I, Yahweh, have spoken it and performed it,” says Yahweh.'”

The second half of Ezekiel 37 is the famous prophecy of two sticks (or two trees). In this passage, Yahweh tells Ezekiel to take two sticks for himself, and then to join them one to another in his hand. These represent how the Ephraimites will be joined to the Jews.

Yehezqel (Ezekiel) 37:15-20
15 Again the word of Yahweh came to me, saying,
16 “As for you, son of man, take a stick for yourself and write on it: ‘For Judah and for the children of Israel, his companions.’ Then take another stick and write on it, ‘For Joseph, the stick of Ephraim, and for all the house of Israel, his companions.’
17 Then join them one to another for yourself into one stick, and they will become one in your hand.
18 And when the children of your people speak to you, saying, ‘Will you not show us what you mean by these?’ —
19 say to them, ‘Thus says Yahweh Elohim: “Surely I will take the stick of Joseph, which is in the hand of Ephraim, and the tribes of Israel, his companions; and I will join them with it, with the stick of Judah, and make them one stick, and they will be one in My hand.”‘
20 And the sticks on which you write will be in your hand before their eyes.”

The stick of Judah is fulfilled by the Zionist Movement, which got started in Europe in the 1890s. The basic idea behind Zionism is that the Jewish people can fulfill the role of the Messiah. That is to say, Zionism teaches that the Jewish people are the Messiah. It may seem ironic that such a non-scriptural movement can fulfill prophecy, but let us consider the history.

In France in the 1890s, a French Jew by the name of Captain Alfred Dreyfus was framed for a crime he did not commit, and anti-Semitism flared up throughout France. A man named Theodore Herzl claimed the Jews would never be safe as long as they lived among Christians. He proclaimed that the Jews needed to return to the land of Israel, and establish their own government (which is something Orthodox Judaism teaches cannot happen until the Messiah brings it about).

Zionism is absolutely not scriptural, and Theodore Herzl has been tied both to the Illuminati and the (Blackhorse) Rothschild banking family. There is much evidence to suggest that the Zionist Movement ties in with Albert Pike’s prophecies perfectly.

While Satan plans to gather the Jews together in Israel and destroy them, that does not mean Yahweh will allow this plan to be fulfilled. The book of Esther records that Yahweh thwarted Haman’s plan to destroy the Jews in Babylon, and Zechariah 12 tells us that Yahweh will also save Judah in a coming major war (which is most likely Armageddon). We also know that our brothers in Judah will get saved at this time, because verse 10 tells us that the Jews will look upon Yeshua whom they pierced, and that they will mourn for Him as one mourns for the loss of a firstborn son. Then there will be a great mourning all throughout the land. This can only pertain to the Jews in the land of Israel, since they are the only people on earth who both put Yeshua to death, and live in the land of Israel.

Yehezqel (Ezekiel) 37:21-28
21 “Then say to them, ‘Thus says Yahweh Elohim: “Surely I will take the children of Israel from among the nations, wherever they have gone, and will gather them from every side and bring them into their own land;
22 and I will make them one nation in the land, on the mountains of Israel; and one king shall be king over them all; they shall no longer be two nations, nor shall they ever be divided into two kingdoms again.
23 They shall not defile themselves anymore with their idols, nor with their detestable things, nor with any of their transgressions; but I will deliver them from all their dwelling places in which they have sinned, and will cleanse them. Then they shall be My people, and I will be their Elohim.
24 David My servant shall be king over them, and they shall all have one shepherd; they shall also walk in My judgments and observe My statutes, and do them.
25 Then they shall dwell in the land that I have given to Jacob My servant, where your fathers dwelt; and they shall dwell there, they, their children, and their children’s children, forever; and My servant David shall be their prince forever.
26 Moreover I will make a covenant of peace with them, and it shall be an everlasting covenant with them; I will establish them and multiply them, and I will set My sanctuary in their midst forevermore.
27 My tabernacle also shall be with them; indeed I will be their Elohim, and they shall be My people.
28 The nations also will know that I, Yahweh, sanctify Israel, when My sanctuary is in their midst forevermore.”

Verse 24 tells us that David will be king over the people, not Yeshua. This agrees with what we said earlier, about Yeshua not being on earth during the millennium.

Some people believe verse 24 means the historic King David will come up out of the ground and sit on a throne. However, as we saw earlier, the dry bones resurrection will be a spiritual resurrection, not a physical one. This means that Israel’s future monarch will come in the power and spirit of King David, just as John the Baptist came in the power and spirit of Eliyahu (Elijah).

Luqa (Luke) 1:17
17 “He will also go before Him in the spirit and power of Elijah, ‘to turn the hearts of the fathers to the children,’ and the disobedient to the wisdom of the just, to make ready a people prepared for Yahweh.”

Ezekiel 37 speaks of the restoration of the house of Ephraim. While most Ephraimites will not know they are Israelites until after Armageddon, Yahweh will reveal our Israelite identities progressively more and more, the closer we get to Armageddon. That is, He will give more and more revelation to His people at the “earthquake points” of seal 6, seal 7, and trumpet 7. That is, when the world order is shaken up, more and more people will be searching for truth—and it is our job to organize, so we can help them find it.

As a special caution, in the last chapter we warned against participating in an early ingathering. It seems that if the borders of Israel are made open after seal 6, that many Hebrew Roots and Messianic believers will go back to the land—and that this will be the Stick of Ephraim. They may then attempt to join with the united world religion in an attempt to influence it “in the right direction.” This will be a tragic mistake.

I used to be very eager to participate in the fulfillment of the prophecies over the stick of Ephraim. Then I realized that I need to listen for Yahweh’s voice, and do what He tells me to do, moment by moment. If I end up going back to the land of Israel in my lifetime, or if I end up staying out in the dispersion (fulfilling the Great Commission) is entirely up to Him. I will gladly exchange any desires I have to dwell in the land of Israel for the privilege of dwelling with Him, wherever He leads.