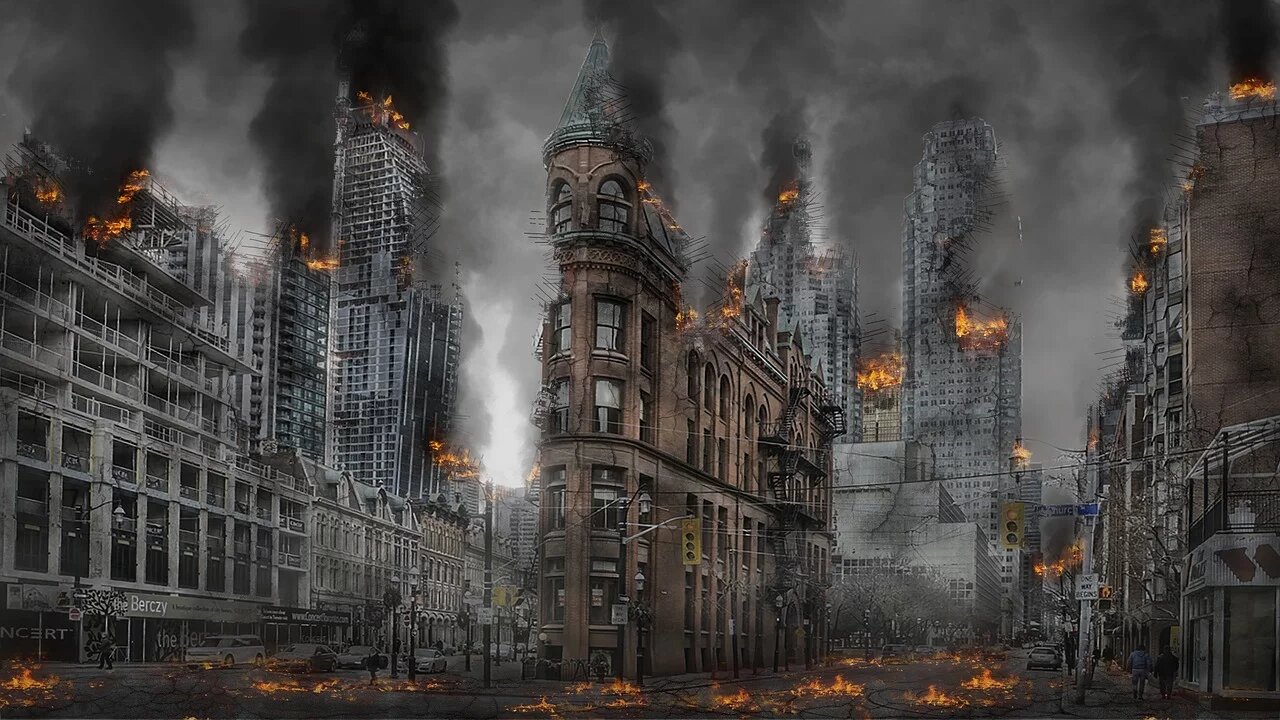 While the seals play out over hundreds of years, and the tribulation takes approximately seven years, the bowls are poured out in about 30 days. We might visualize a fireworks display which starts slowly, builds, and finally peaks in a grand finale at the end. We can also apply the parable of the pregnant bride (Israel), who bears a growing burden for many months. As her time to give birth draws near, she begins to suffer labor pains (contractions). Near the end she cries out in pain (seven thunders). Then her water breaks (cups). In the end her pain becomes all-consuming (even blinding) right before she gives birth to her man child (redeemed Israel), and Elohim’s kingdom is restored.

In Revelation 15 we return to the storyline, where the events of inset chapter 14 will unfold. First we meet 7 messengers who will pour out the final 7 plagues upon the earth to complete the wrath of Elohim. We are also reminded that it is right for Yahweh to pour out these cups of judgment and destruction on Babylon.

Hitgalut (Revelation) 15:1-4
1 Then I saw another sign in heaven, great and marvelous: seven messengers having the seven last plagues, for in them the wrath of Elohim is complete.
2 And I saw something like a sea of glass mingled with fire, and those who have the victory over the beast, over his image and over his mark and over the number of his name, standing on the sea of glass, having harps of Elohim.
3 They sing the song of Moshe, the servant of Elohim, and the song of the Lamb, saying:
“Great and marvelous are Your works, Yahweh Elohim Almighty! Just and true are Your ways, O King of the saints!
4 Who shall not fear You, O Yahweh, and glorify Your name? For You alone are set-apart. For all nations shall come and worship before You, For Your judgments have been manifested.”

Armageddon occurs 45 days after the cups are poured out. In later chapters we will show that Armageddon is the wedding feast, when Ephraim recalls that she is the bride. The bride will then want to come back home to Yahweh’s land, and set up His kingdom. This will lead to the Ingathering, and then the millennium. It is during the millennium that verse 4 is fulfilled, and all nations come to worship before Yahweh. This ties to Zechariah 14, where we are told that all the nations which came against Jerusalem (i.e., the Islamic nations) will have to come up to Jerusalem to worship Yahweh and keep the feast of Tabernacles, or they will have no rain. (Note: in verse 17 the word earth is the Hebrew word aretz (ארץ). While this word can mean land, in this context it refers to the land of the Middle East.)

Zecharyah (Zechariah) 14:16-17
16 And it shall come to pass that everyone who is left of all the nations which came against Jerusalem shall go up from year to year to worship the King, Yahweh of hosts, and to keep the Feast of Tabernacles.
17 And it shall be that whichever of the families of the earth [ארץ] do not come up to Jerusalem to worship the King, Yahweh of hosts, on them there will be no rain.

Next, the 7 messengers receive the 7 cups, and no one may enter the heavenly temple until after these cups of judgment (and wrath) have been poured out.

While the commands to open seals and sound trumpets were given one at a time, here the 7 messengers are told to pour out the cups in quick succession or all at once.

Hitgalut (Revelation) 16:1-3
1 Then I heard a loud voice from the temple saying to the seven messengers, “Go and pour out the cups of the wrath of Elohim on the earth.”
2 So the first went and poured out his bowl upon the earth, and a foul and loathsome sore came upon the men who had the mark of the beast and those who worshiped his image.
3 Then the second messenger poured out his cup on the sea, and it became blood as of a dead man; and every living creature in the sea died.

During the trumpets, the destruction took place by thirds (i.e., on a large minority). However, here the devastation is near total. For example, when cup 1 is poured out, all those who have taken the mark of the beast and who worship his image receive foul and loathsome sores. When cup 2 is poured out, the sea (Mediterranean) turns to blood, and every living creature in the sea dies.

When cup 3 is poured out, the rivers and springs of water turn to blood. This is probably a symbolic reference to a spiritual event. Since water represents the Spirit (and hence, doctrine), it may be that those loyal to Babylon drink spiritual blood, just as Babylon drank from a cup filled with the blood of the saints (Revelation 17:6). In other words, because they refuse to turn back, they continue to become more like their mistress, Babylon.

Hitgalut (Revelation) 16:4-7
4 Then the third messenger poured out his cup on the rivers and springs of water, and they became blood.
5 And I heard the messenger of the waters saying:
“You are righteous, O Yahweh, The One who is and who was and who is to be, Because You have judged these things.
6 For they have shed the blood of saints and prophets, And You have given them blood to drink. For it is their just due.”
7 And I heard another from the altar saying, “Even so, Yahweh Elohim Almighty, true and righteous are Your judgments.”

Then cup 4 is poured out on the sun, and the messenger is given the power to scorch men with fire. However, those who love Babylon still refuse to repent or give glory to Elohim.

Hitgalut (Revelation) 16:8-9
8 Then the fourth messenger poured out his cup on the sun, and power was given to him to scorch men with fire.
9 And men were scorched with great heat, and they blasphemed the name of Elohim who has power over these plagues; and they did not repent and give Him glory.

When cup 5 is poured out, the beast’s kingdom (i.e., the one world system and the one world religion) become full of darkness, and men gnaw their tongues because of the pain.

Hitgalut (Revelation) 16:10-11
10 Then the fifth messenger poured out his cup on the throne of the beast, and his kingdom became full of darkness; and they gnawed their tongues because of the pain.
11 They blasphemed the Elohim of heaven because of their pains and their sores, and did not repent of their deeds.

When cup 6 is poured out, three unclean spirits like frogs come from the mouths of the dragon (Satan), the beast (Babylon/Rome), and the false prophet (Muhammad). For an unclean spirit to come out of the mouth of Satan means that even he is possessed. These demons then begin gathering the whole world (or perhaps the Islamic world) to battle at Armageddon, which will take place some 45 days later.

Hitgalut (Revelation) 16:12-16
12 Then the sixth messenger poured out his cup on the great river Euphrates, and its water was dried up, so that the way of the kings from the east might be prepared.
13 And I saw three unclean spirits like frogs coming out of the mouth of the dragon, out of the mouth of the beast, and out of the mouth of the false prophet.
14 For they are spirits of demons, performing signs, which go out to the kings of the earth and of the whole world, to gather them to the battle of that great day of Elohim Almighty.
15 “Behold, I am coming as a thief. Blessed is he who watches, and keeps his garments, lest he walk naked and they see his shame.”
16 And they gathered them together to the place called in Hebrew, Har Megiddo [Armageddon].

When cup 7 is poured out, there is an earthquake greater than any before. This represents the complete collapse of the Babylonian social order, which has ruled the world since the days of Nimrod (Genesis 10:8-10). When the Babylonian tyranny comes crashing down, every island (national boundary) will disappear, and no mountain (government) will be found.

Hitgalut (Revelation) 16:17-21
17 Then the seventh messenger poured out his bowl into the air, and a loud voice came out of the temple of heaven, from the throne, saying, “It is done!”
18 And there were noises and thunderings and lightnings; and there was a great earthquake, such a mighty and great earthquake as had not occurred since men were on the earth.
19 Now the great city was divided into three parts, and the cities of the nations fell. And great Babylon was remembered before Elohim, to give her the cup of the wine of the fierceness of His wrath.
20 Then every island [national boundary] fled away, and the mountains [governments] were not found.
21 And great hail from heaven fell upon men, each hailstone about the weight of a talent. Men blasphemed Elohim because of the plague of the hail, since that plague was exceedingly great.

This is also when the statue in Nebuchadnezzar’s dream comes crashing down, and the kingdom of Elohim is set back up in its place.

Daniel 2:44-45
44 “And in the days of these kings the Elohim of heaven will set up a kingdom which shall never be destroyed; and the kingdom shall not be left to other people; it shall break in pieces and consume all these kingdoms, and it shall stand forever.
45 Inasmuch as you saw that the stone was cut out of the mountain without hands, and that it broke in pieces the iron, the bronze, the clay, the silver, and the gold — the great Elohim has made known to the king what will come to pass after this. The dream is certain, and its interpretation is sure.”

The great city in verse 19 is probably Rome. This may be why the cities of the nations (i.e., the capitals which are built upon a Babylonian foundation) also fall at that time. This will be a time of great upheaval. There will be no police, military, or government. While we should do what we can to prepare for this day in the natural, it is far more important to prepare spiritually, by hearing and obeying Yahweh’s voice. That will determine who the redeemed Israelites are, and those are the people Yahweh wants to bring back home to His land. Yahweh has no incentive to protect or bring back those who do not obey.