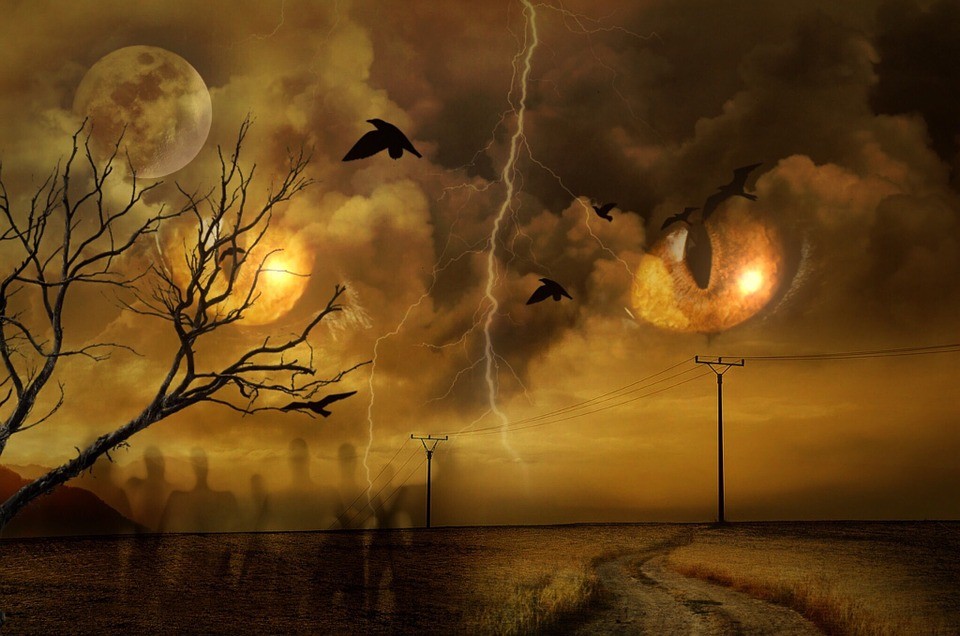 In the last chapter we saw how King Nebuchadnezzar dreamed of a statue which represented a series of five empires (Babylon, Medea-Persia, Greece, and Rome), with the final empire being a spiritual one (Christianity and Islam together).

We also saw how Daniel 7 likens the first three of these empires unto certain animals.

We also saw how the fourth beast (Rome, including both Christianity and Islam) would trample the residue of the empires that had gone before it (especially Greece).

Daniel 7:7
7 “After this I saw in the night visions, and behold, a fourth beast, dreadful and terrible, exceedingly strong. It had huge iron teeth; it was devouring, breaking in pieces, and trampling the residue with its feet. It was different from all the beasts that were before it, and it had ten horns.”

These same beast empires reappear in Revelation 13, except that they are depicted as a composite beast which comes up out of the sea. Later we will see that water represents people, so this is a Babylonian political and spiritual beast (in which the mass of people believe).

The first beast is like a leopard (Alexander’s Grecian empire), except that its feet are like a bear’s feet (Medea-Persia) while its mouth is like a lion’s mouth (Babylon). It tramples the residue of all empires which have gone before it. It has seven heads (which we will see refer to the seven hills of Rome, and the seven mountains of Mecca). This combined Roman-Islamic beast is so powerful that most men worship it. This is the Roman-Islamic beast which comprises both the Christian church system and Islam.

Hitgalut (Revelation) 13:1-10
1 Then I stood on the sand of the sea. And I saw a beast [Rome/Islam] rising up out of the sea, having seven heads [seven hills of Rome and seven mountains of Mecca] and ten horns [kingdoms], and on his horns ten crowns, and on his heads a blasphemous name.
2 Now the beast which I saw was like a leopard [Greece], his feet were like the feet of a bear [Medea-Persia], and his mouth like the mouth of a lion [Babylon]. The dragon [Satan] gave him his power, his throne, and great authority.
3 And I saw one of his heads as if it had been mortally wounded [Protestant rebellion, Ottoman Empire], and his deadly wound was healed. And all the world marveled and followed the beast.
4 So they worshiped the dragon [Satan] who gave authority to the beast; and they worshiped the beast [Rome/Islam], saying, “Who is like the beast? Who is able to make war with him?”
5 And he was given a mouth speaking great things and blasphemies, and he was given authority to continue for forty-two months.
6 Then he opened his mouth in blasphemy against Elohim, to blaspheme His name, His tabernacle, and those who dwell in heaven.
7 It was granted to him to make war with the saints and to overcome them. And authority was given him over every tribe, tongue, and nation.
8 All who dwell on the earth will worship him, whose names have not been written in the Book of Life of the Lamb slain from the foundation of the world.
9 If anyone has an ear, let him hear.
10 He who leads into captivity shall go into captivity; he who kills with the sword must be killed with the sword. Here is the patience and the faith of the saints.

The Roman Catholic Empire received a mortal wound in 1517, when the Protestant Christians broke away from the Catholics. This wound became worse in 1588, when the (Protestant) English navy sank the Spanish Armada, ending Catholic military supremacy in Europe. This mortal wound, however, is slowly being healed through the Ecumenical Movement, which is drawing the Protestant Christians back in under the pope.

The Islamic head received its first mortal wound in 732 CE, when Charles Martel, King of France, defeated the Muslim armies at the Battle of Tours. The Islamic head received a second mortal wound on September 11, 1683, when the Islamic Ottoman Empire lost to the Christian armies at the walls of Vienna. This marked the beginning of the decline of the Ottoman Empire, which finally disbanded in 1922 CE. However, today it also appears that the Muslim world’s mortal wounds are being healed. For example, the Islamic attacks on the World Trade Center (9/11/2001) were timed to the anniversary of the Islamic defeat at the walls of Vienna, as if to say that Islam is being restored to the world political scene after 318 years. We can also view the Arab Spring of 2002 as a continuation of this revival. Further, the present Islamic State (ISIS/ISIL) is another manifestation of this same restoration. Whether this early Islamic State succeeds or not, we will see later that a restored Islamic State will likely be based in Istanbul, Turkey. This is where Emperor Constantine first put the eastern leg of the Roman Empire, and it was also where the Byzantine Empire placed its seat. Finally, it was the seat of the Ottoman Islamic Empire, whose mortal wound is to be healed.

Since Catholicism and Islam are two manifestations of the same spiritual beast (from the sea), eventually we can expect them to manifest as one combined beast. Verse 5 tells us this beast will speak great blasphemies against Elohim (by contradicting His word), and that this will continue 42 months (3 1/2 years). This is probably the last half of the tribulation, which is the same 42 months as the ministry of the two witnesses (the time of Jacob’s Trouble).

In verse 7 (above) we are told that the beast will be given the authority to make war with the saints, and to overcome them. This has happened both under Catholic and Islamic rule; however, it will likely happen with greater force during the time of Jacob’s Trouble. While Yahweh will give us victory over the beast after trumpet 7, it is imperative that we show patience and faith (verse 10, above), not taking up arms against the beast before that time, as it will only lead to our captivity or death.

In verse 11 (below) a second beast comes up out of the earth. It has two horns like a lamb (mimicking Yeshua), yet it speaks like a dragon (Satan). Since the earth represents government, this will be a state-sponsored government religion for the New World Order, probably based on Catholicism combined with Islam. It exercises all of the authority of the first beast (the combined Roman-Islamic world) in the Roman-Islamic world’s presence. This religion causes the earth and those who dwell in it to worship the first beast (world government).

Hitgalut (Revelation) 13:11-18
11 Then I saw another beast coming up out of the earth, and he had two horns like a lamb [UN and URI] and spoke like a dragon [Satan].
12 And he exercises all the authority of the first beast [Rome/Islam] in his presence, and causes the earth and those who dwell in it to worship the first beast [Rome/Islam], whose deadly wound was healed.
13 He performs great signs, so that he even makes fire come down from heaven on the earth in the sight of men.
14 And he deceives those who dwell on the earth by those signs which he was granted to do in the sight of the beast, telling those who dwell on the earth to make an image to the beast [URI] who was wounded by the sword and lived [Catholic and Ottoman empires].
15 He was granted power to give breath to the image of the beast [possibly URI], that the image of the beast should both speak and cause as many as would not worship the image of the beast to be killed.
16 He causes all, both small and great, rich and poor, free and slave, to receive a mark on their right hand or on their foreheads,
17 and that no one may buy or sell except one who has the mark or the name of the beast, or the number of his name.
18 Here is wisdom. Let him who has understanding calculate the number of the beast, for it is the number of a man: His number is 666 [chi xi stigma].

Verse 14 tells us that the land beast (UN) will tell the people to make an image (URI) to the sea beast (Christianity and Islam). Verse 15 says that this image will be given breath (spirit), which means that it will come to life. It will also speak (create doctrine). The land beast (UN) will then attempt to exterminate everyone who does not worship (obey) the URI. This fits our earlier scenario which tells us there will be an engineered nuclear war at seal 6. The globalists will say that the war was the result of extremist (fundamentalist) religious belief—and that anyone who believes “extremist” Christianity, Judaism, or Islam is a threat to public safety, and must therefore be eliminated.

It is important to understand the URI mindset, which is somewhat different than our own. To understand it, let us take a step back, and look at the history of the Babylonian religion.

When the Babylonians conquered a foreign people, they scattered them inside their own borders. This kept them from rising up militarily. Further, if the captives joined the culture and assimilated, they were treated just like any other Babylonian citizen, regardless of race or ethnicity.

The URI, however, takes an interesting twist. Rather than attempting to add one conquered people to the Babylonian religion at a time, the URI is an attempt to merge all religions and faiths at one time. The way this is done is to pretend that each and every racial or ethnic group has its own way of connecting with “God,” and that all of these means are equally valid.