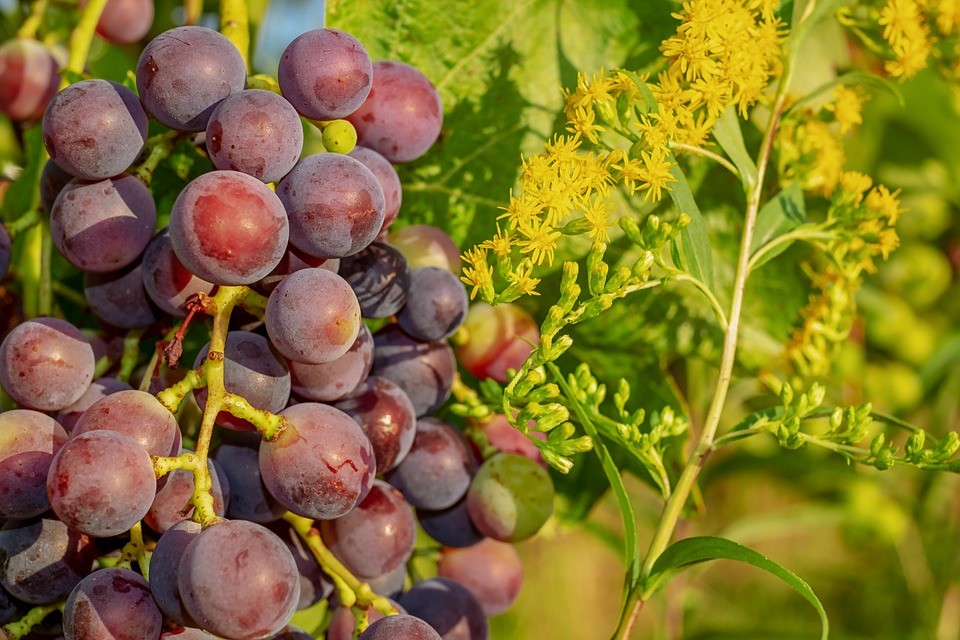 The timing of the harvest of the 144,000 and the great multitude is subject to discussion. We first met them in Revelation 7, where they were sealed (protected) from harm. This occurs after seal 6, but before the trumpets.

Revelation does not speak of a random mass of 144,000 disorganized believers. Rather, it speaks of twelve tribes of Israel. In Torah, the tribes are organized according to families, with heads of households also being organized by tens, fifties, hundreds, and thousands (e.g., Exodus 18:25). Each tribe also has a tribal leader. Later we will see that while the tribal affiliations have been lost, Yahweh does expect His people to organize (at this time according to geographical areas). To fail to organize is to reject Torah principles.

Revelation 9 shows us that the 144,000 will be protected from harm through trumpet 5. This is probably the midway point of the tribulation (when the 7 thunders utter their voices, and the time of Jacob’s Trouble begins).

Hitgalut (Revelation) 9:3-5
3 Then out of the smoke locusts came upon the earth. And to them was given power, as the scorpions of the earth have power.
4 They were commanded not to harm the grass of the earth, or any green thing, or any tree, but only those men who do not have the seal of Elohim on their foreheads.
5 And they were not given authority to kill them, but to torment them for five months. Their torment was like the torment of a scorpion when it strikes a man.

Hitgalut (Revelation) 7:9-10
9 After these things I looked, and behold, a great multitude which no one could number, of all nations, tribes, peoples, and tongues, standing before the throne and before the Lamb, clothed with white robes, with palm branches in their hands,
10 and crying out with a loud voice, saying, “Salvation belongs to our Elohim who sits on the throne, and to the Lamb!”

Although the 144,000 are protected through trumpet 5, in verse 1 we are told that the Lamb (Yeshua) is standing on “Mount Zion” with the 144,000. One can argue whether this is the earthly Mount Zion or a heavenly one, but verse 2 clearly takes place in heaven, because now the 144,000 are “before the throne” (which is in heaven). Further, verse 4 tells us that they have been “redeemed from among men,” and that they are “firstfruits to Elohim and to the Lamb.” All of these things tell us that the 144,000 have been harvested.

Hitgalut (Revelation) 14:1-5
1 Then I looked, and behold, a Lamb standing on Mount Zion, and with Him one hundred and forty-four thousand, having His Father’s name written on their foreheads.
2 And [i.e., Then] I heard a voice from heaven, like the voice of many waters, and like the voice of loud thunder. And I heard the sound of harpists playing their harps.
3 They sang as it were a new song before the throne, before the four living creatures, and the elders; and no one could learn that song except the hundred and forty-four thousand who were redeemed from the earth.
4 These are the ones who were not defiled with women, for they are virgins. These are the ones who follow the Lamb wherever He goes. These were redeemed from among men, being firstfruits to Elohim and to the Lamb.
5 And in their mouth was found no deceit, for they are without fault before the throne of Elohim.

The 144,000 are harvested in between trumpets 5 and 7, because the 144,000 are protected through trumpet 5, but by trumpet 7 they have already been harvested. Elohim’s judgment is announced in verse 7, followed by the announcement of Babylon’s fall, and both of these things take place at or around trumpet 7.

Hitgalut (Revelation) 14:6-8
6 Then I saw another messenger flying in the midst of heaven, having the everlasting Good News to preach to those who dwell on the earth — to every nation, tribe, tongue, and people —
7 saying with a loud voice, “Fear Elohim and give glory to Him, for the hour of His judgment has come; and worship Him who made heaven and earth, the sea and springs of water.”
8 And another messenger followed, saying, “Babylon is fallen, is fallen, that great city, because she has made all nations drink of the wine of the wrath of her fornication.”

The 144,000 firstfruits are probably taken to heaven at or near the beginning of the time of Jacob’s Trouble because the next thing we get is a warning not to take the mark of the beast (which will be needed to buy or sell during Jacob’s Trouble).

Hitgalut (Revelation) 14:9-12
9 Then a third messenger followed them, saying with a loud voice, “If anyone worships the beast and his image, and receives his mark on his forehead or on his hand,
10 he himself shall also drink of the wine of the wrath of Elohim, which is poured out full strength into the cup of His indignation. He shall be tormented with fire and brimstone in the presence of the set-apart angels and in the presence of the Lamb.
11 And the smoke of their torment ascends forever and ever; and they have no rest day or night, who worship the beast and his image, and whoever receives the mark of his name.”
12 Here is the patience of the saints; here are those who keep the commandments of Elohim and the faith of Yeshua.

Those who die while believing in Yeshua from trumpet 7 onward will be blessed, because as we will see later, the wedding feast (Armageddon) takes place not long after trumpet 7 (and so it is not long before they get to go be with Yeshua).

Hitgalut (Revelation) 14:13
13 Then I heard a voice from heaven saying to me, “Write: ‘Blessed are the dead who die in Yahweh from now on.'” “Yes,” says the Spirit, “that they may rest from their labors, and their works follow them.”

Next we read about the two harvests of humankind. The first one is the grain harvest, which is conducted by one looking “like the Son of Man” (Yeshua).

Hitgalut (Revelation) 14:14-16
14 Then I looked, and behold, a white cloud, and on the cloud sat One like the Son of Man, having on His head a golden crown, and in His hand a sharp sickle.
15 And another messenger came out of the temple, crying with a loud voice to Him who sat on the cloud, “Thrust in Your sickle and reap, for the time has come for You to reap, for the harvest of the earth is ripe.”
16 So He who sat on the cloud thrust in His sickle on the earth, and the earth was reaped.

This symbolism is consistent with Yeshua’s agricultural parables, in which the believers are likened unto wheat (or other grains) and are harvested.

Marqaus (Mark) 4:26-29
26 And He said, “The kingdom of Elohim is as if a man should scatter seed on the ground,
27 and should sleep by night and rise by day, and the seed should sprout and grow, he himself does not know how.
28 For the earth yields crops by itself: first the blade, then the head, after that the full grain in the head.
29 But when the grain ripens, immediately he puts in the sickle, because the harvest has come.”

Yeshua also says the tares are taken out before the true wheat harvest. This may mean that many replacement theology Christians will be harvested first.

Matityahu (Matthew) 13:24-30
24 Another parable He put forth to them, saying: “The kingdom of heaven is like a man who sowed good seed in his field;
25 but while men slept, his enemy came and sowed tares among the wheat and went his way.
26 But when the grain had sprouted and produced a crop, then the tares also appeared.
27 So the servants of the owner came and said to him, ‘Sir, did you not sow good seed in your field? How then does it have tares?’
28 He said to them, ‘An enemy has done this.’ The servants said to him, ‘Do you want us then to go and gather them up?’
29 But he said, ‘No, lest while you gather up the tares you also uproot the wheat with them.
30 Let both grow together until the harvest, and at the time of harvest I will say to the reapers, “First gather together the tares and bind them in bundles to burn them, but gather the wheat into my barn.”

Next we read about the grape harvest, which takes place around the city (Jerusalem, verse 20).

Hitgalut (Revelation) 14:17-20
17 Then another messenger came out of the temple which is in heaven, he also having a sharp sickle.
18 And another messenger came out from the altar, who had power over fire, and he cried with a loud cry to him who had the sharp sickle, saying, “Thrust in your sharp sickle and gather the clusters of the vine of the earth, for her grapes are fully ripe.”
19 So the angel thrust his sickle into the earth and gathered the vine of the earth, and threw it into the great winepress of the wrath of Elohim.
20 And the winepress was trampled outside the city, and blood came out of the winepress, up to the horses’ bridles, for one thousand six hundred furlongs.

Sixteen hundred furlongs is roughly 321 kilometers or 190 miles. If we begin at Jerusalem, a radius of 190 miles encompasses the modern day State of Israel (see picture below).

The blood of grapes can symbolize human blood, so it is likely that the blood of the grapes in the verses above symbolize the blood of believers who are killed. This may also be what fills the cups of Yahweh’s wrath, which is poured out on those belonging to Babylon. (We will read about this in the next chapter.) 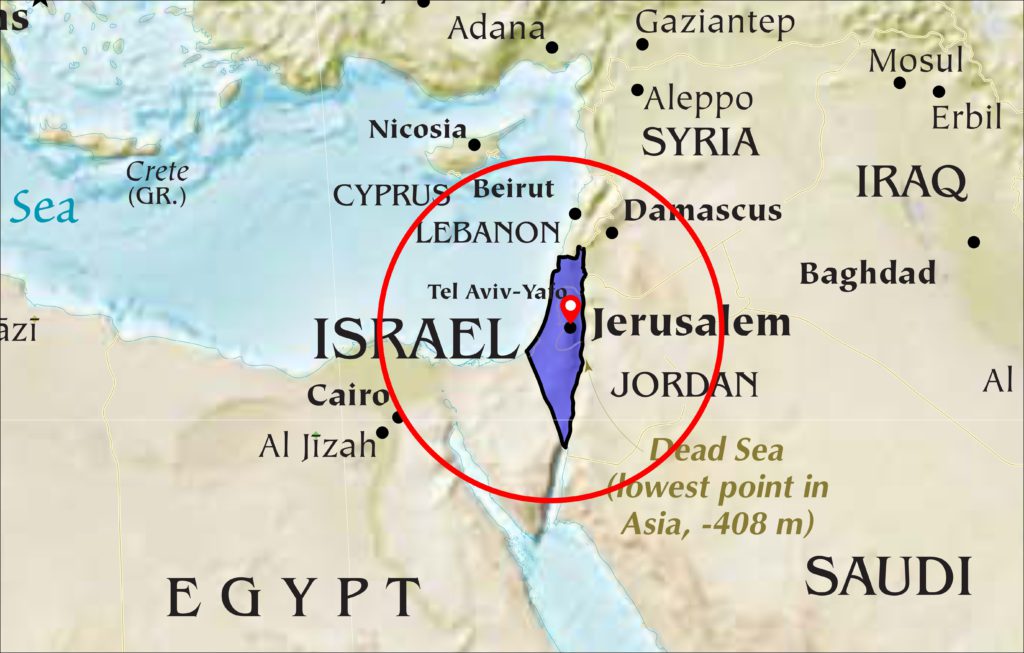 Unless Yahweh tells us to be in Israel during the time of Jacob’s Trouble (during the last half of the tribulation), it would be safer to live outside the land.

Now let us rejoin the storyline in chapter 15, where we will read about the cups of Yahweh’s wrath being poured out on the harlot, Babylon.