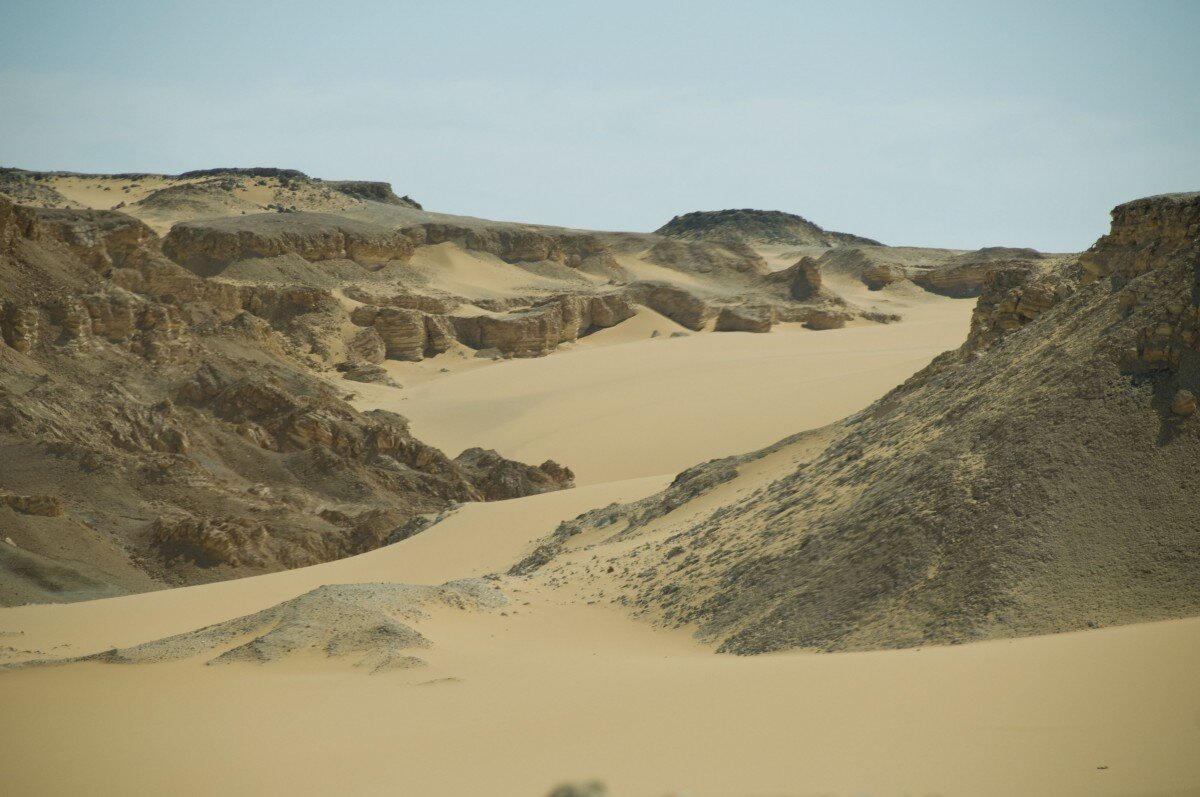 Chapters 12 through 15 are inset chapters that will give us more information about detailed topic areas. When we rejoin the storyline in chapter 16, we will be able to make better sense of the story.

In the opening pages of this book, we give the parable of the pregnant woman (i.e., the bride, Israel). When a woman is pregnant, she bears a growing burden over a long time period. This corresponds to the seals, which play out over hundreds of years. As her time of delivery is near, she is gripped by increasing labor pains. These correspond to the trumpets (i.e., the tribulation). Her cries of pain correspond to the seven thunders. Her water breaking represents the cups being poured out. Finally, she is gripped by excruciating, even blinding pain as she gives birth to her child. This is redeemed Israel—those who are led by His Spirit to do everything He commands.

If the woman is Israel, Revelation 12 shows us a great drama that takes place between the woman, her Child (Yeshua, but also redeemed Israel), and a dragon (which verse 9 tells us is Satan). As we will see, the sun represents Yeshua’s Spirit, the moon represents the Torah, and the garland of 12 stars on the woman’s head represents the 12 tribes.

Hitgalut (Revelation) 12:1
1 Now a great sign appeared in heaven: a woman [Israel/Miriam] clothed with the sun [Yeshua’s Spirit], with the moon [Torah] under her feet, and on her head a garland of twelve stars [12 tribes].

Malachi 4:2a
“2a But to you who fear My name
The Sun of Righteousness shall arise
With healing in His wings….”

Mishle (Proverbs) 6:23
23 For the commandment is a lamp,
And the Torah a light;
Reproofs of instruction are the way of life

Psalm 119 says that Yahweh’s word is a lamp for our feet, and a light for our path, like the moon.

The symbolism may be that true Israel is like a bride who is clothed with Yeshua’s Spirit, and she walks the path of Torah. Her 12 children (the 12 tribes) are a garland to her head.

Verses 2-4 speak of how Miriam gave birth to Yeshua, who was then persecuted by the dragon (Satan) and caught up to heaven.

Hitgalut (Revelation) 12:2-6
2 Then being with child, she [Israel/Miriam] cried out in labor and in pain to give birth.
3 And another sign appeared in heaven: behold, a great, fiery red dragon having seven heads and ten horns, and seven diadems on his heads.
4 His tail drew a third of the stars of heaven and threw them to the earth. And the dragon stood before the woman who was ready to give birth, to devour her Child [Yeshua] as soon as it was born.
5 She bore a male Child who was to rule all nations with a rod of iron. And her Child was caught up to Elohim and His throne.
6 Then the woman fled into the wilderness, where she has a place prepared by Elohim, that they should feed her there one thousand two hundred and sixty days.

The red dragon of verse 3 is symbolic of Satan, who is manifested on earth through the Roman Empire (whom we will see is a manifestation of the Babylonian Empire).

In Nazarene Israel we saw how Daniel 7 speaks of 1,260 days in which the saints were given into the little horn’s (pope’s) hand. This corresponds to the 1,260 days in verse 6 (above).

Daniel 7:25
25 He shall speak pompous words against the Most High, shall persecute the saints of the Most High, and shall intend to change times and Torah. Then the saints shall be given into his hand for a time and times and half a time [1,260 days].

In Nazarene Israel we show how these 1,260 days correspond to the approximate 1,260 years between the formation of the Roman Catholic Church dogma at the Council of Nicea (circa 325-330 CE) and the time when Protestant England came out from under fear of Roman military dominion (with the sinking of the Catholic Spanish Armada, in 1,588 CE). (Because we are referring to moves of the Spirit, the dates do not need to be exact.)

Later we will see that Babylon, Assyria, Greece, Rome, and even Islam are all manifestations of the Babylonian empire system. However, here let us notice that Rome used a red or purple dragon (or draco) on their banners. The military units also typically placed eagles on their flags or flagstaffs. 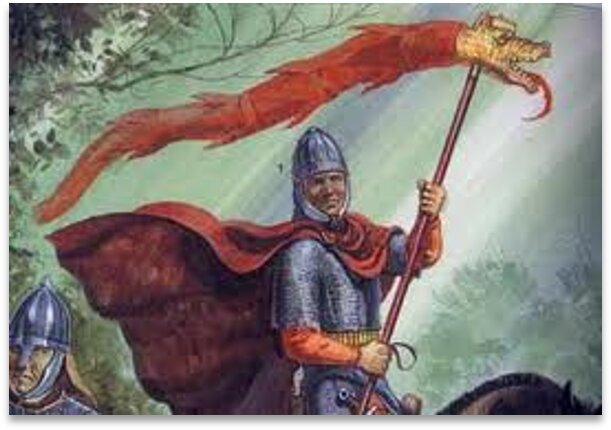 The occult has many meaningful symbols. The eagle represents Nisroc, the Assyrian demon symbolized by an eagle. (Nisroc has the same etymological root as the Hebrew word nesher נשר, meaning eagle.) The eagle has been used by Roman-style republics throughout history, including Rome, Russia, Nazi Germany, and America. This symbol is not used by chance.

Now let us remember that the white horse is papal Christianity that it goes forth to conquer.

Hitgalut (Revelation) 6:2
2 And I looked, and behold, a white horse. He who sat on it had a bow; and a crown was given to him, and he went out conquering and to conquer.

One can speculate about whether or not they coordinate behind the scenes, but the Catholic, Protestant, and Orthodox Christian nations all manifest the white horse spirit of Roman Christianity. Each of them has gone forth to conquer.

Historically there has been some safety in being at a distance from the white horse’s centers of power and worship. For example, in the Middle Ages the Vaudois and the Waldenses were able to follow their own interpretation of Scripture (rather than Roman doctrine) because they were at a physical distance from Rome. And the Protestant Reformation succeeded because it was harder for Rome to crush the rebellion in the outer reaches of its empire. This is also why Revelation 12:6 (above) tells us the woman Israel fled into the wilderness for 1,260 days/years to a place where she could be spiritually nourished by Yahweh’s word.

Next we read about a war in heaven in which the dragon, identified as Satan, is cast to earth.

Hitgalut (Revelation) 12:7-12
7 And war broke out in heaven: Michael and his messengers fought with the dragon; and the dragon and his messengers fought,
8 but they did not prevail, nor was a place found for them in heaven any longer.
9 So the great dragon was cast out, that serpent of old, called the Devil and Satan, who deceives the whole world; he was cast to the earth, and his messengers were cast out with him.
10 Then I heard a loud voice saying in heaven, “Now salvation, and strength, and the kingdom of our Elohim, and the power of His Messiah have come, for the accuser of our brethren, who accused them before our Elohim day and night, has been cast down.
11 And they overcame him by the blood of the Lamb and by the word of their testimony, and they did not love their lives to the death.
12 Therefore rejoice, O heavens, and you who dwell in them! Woe to the inhabitants of the earth and the sea! For the devil has come down to you, having great wrath, because he knows that he has a short time.”

The woman Israel had to flee false doctrines so she could return to the original Nazarene Israelite faith.

Hitgalut (Revelation) 12:13-17
13 Now when the dragon saw that he had been cast to the earth, he persecuted the woman who gave birth to the male Child.
14 But the woman was given two wings of a great eagle, that she might fly into the wilderness to her place, where she is nourished for a time and times and half a time, from the presence of the serpent.
15 So the serpent spewed water out of his mouth like a flood after the woman, that he might cause her to be carried away by the flood.
16 But the earth helped the woman, and the earth opened its mouth and swallowed up the flood which the dragon had spewed out of his mouth.
17 And the dragon was enraged with the woman, and he went to make war with the rest of her offspring, who keep the commandments of Elohim and have the testimony of Yeshua Messiah.

Water is symbolic of Yahweh’s Spirit (and hence, clean doctrine). However, in this case, the flood of unclean waters spewing forth from the dragon’s mouth represent unclean spirits (and false doctrines). The bride consists of those believers who have fled from these unclean doctrines.

The earth helped the woman by opening its mouth and swallowing the flood of evil doctrines. This again shows how the bride has historically been safer at a distance from the Babylonian centers of power and worship.

The point of the following chart is to illustrate that the dragon is always pursuing us. If the bride ever stops seeking to come back to Yeshua and the original faith, it is as if she has been “swept away” by the flood of unclean doctrines. 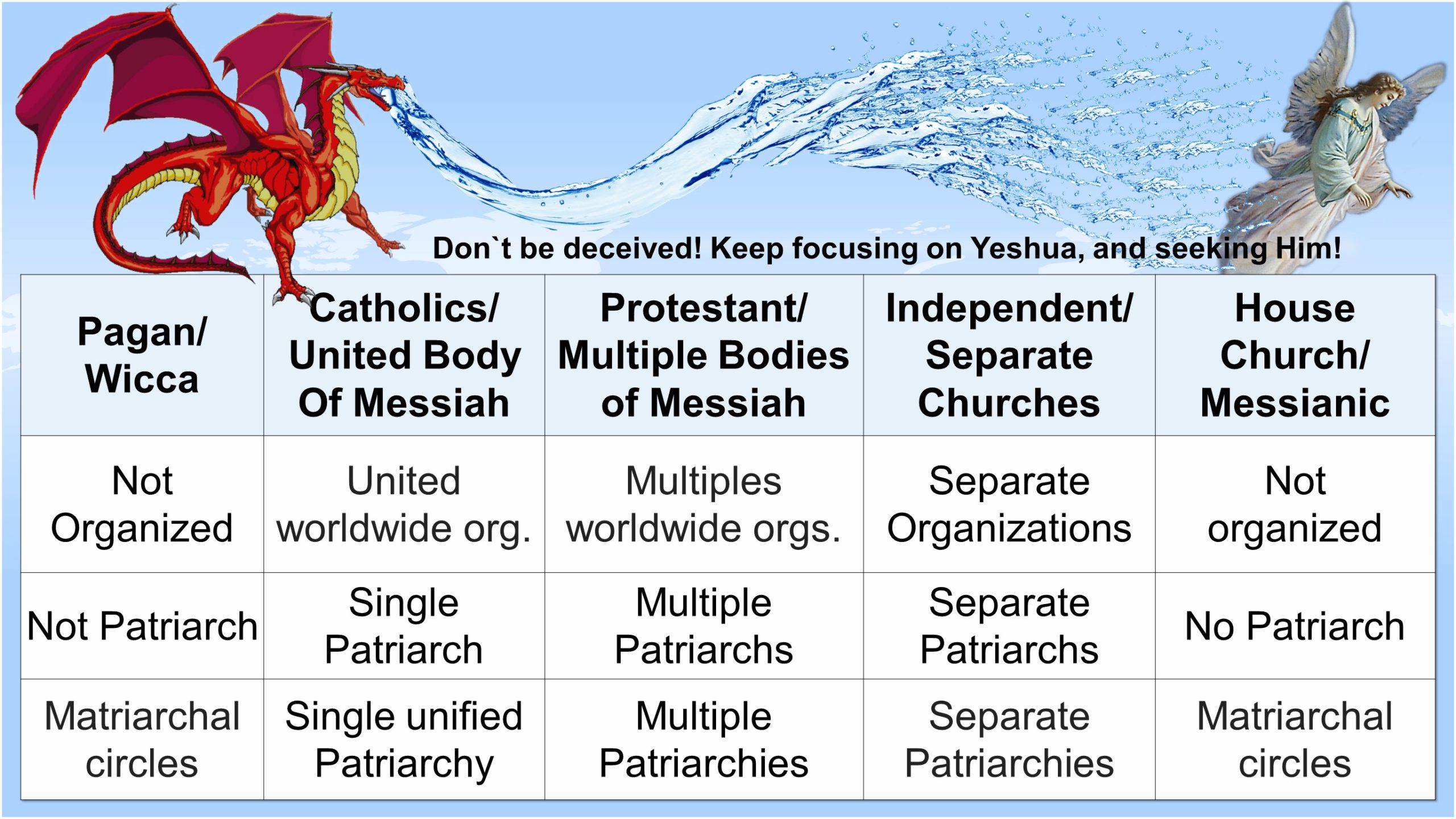 In Nazarene Israel we explain that while Nazarene Israel is the original faith, the Catholic faith spread much faster, because outside the land of Israel, the gentiles did not understand the need to keep Torah. Catholicism is a good first step toward Yeshua. However, if we stop in Catholicism, then we have effectively been swept away by the dragon’s flood. Protestantism was another step toward the truth—but if we stop in mainline Protestant dogma, it is also as if we have been swept away by the dragon’s flood. Therefore it is necessary to come all the way back to the original faith.

In the next chapter we will take our analysis to the next level. We will lay the scriptural understanding of why the dragon manifests not just as Rome, but also as Islam and all of the world’s political powers which pay homage to either of them.