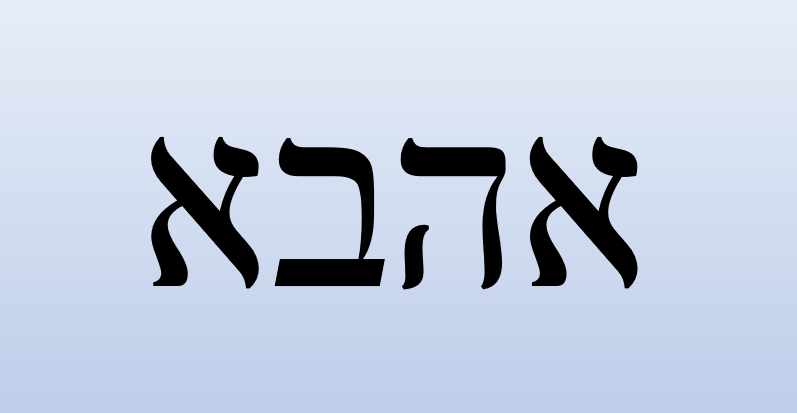 The world thinks that love is a feeling. When we feel good about other people, and we are benefiting from our relationships, the world calls that love. However, that is nothing more than feelings of gratification based on selfish interest.

Consider: in the arranged marriages of old, you would be introduced to your potential marriage partner. You could say yes or no, but if you said yes, then for better or for worse, you would need to learn to commit yourself to the relationship, and play your role as best you could. You would need to learn to support your spouse, and learn to love and support him or her in Yeshua. In this system, it was understood that love was a commitment. You had to decide to do your best for the other person, and learn to care about him or her, regardless of whether they reciprocated, or not.

In English, sometimes it is said that although you may not like your spouse, you still need to love him or her. The only problem is that this distinction does not exist in Hebrew. In Hebrew, like and love are the same word, Strong’s OT:160, ahava (אהבה).

When we trace this word back to its root we get Strong’s OT:157, ahav (אהב), which means to have affection for someone. It can be any kind of affection (sexual or not). Either way, affection is love.

Hebrew love does not depend on getting anything back. It means only committed affection, and compassion.

Luqa (Luke) 10:25-37
25 And behold, a certain lawyer stood up and tested Him, saying, “Teacher, what shall I do to inherit eternal life?”
26 He said to him, “What is written in the Torah? What is your reading of it?”
27 So he answered and said, “‘You shall love Yahweh your Elohim with all your heart, with all your soul, with all your strength, and with all your mind,’ and ‘your neighbor as yourself.'”
28 And He said to him, “You have answered rightly; do this and you will live.”
29 But he, wanting to justify himself, said to Yeshua, “And who is my neighbor?”
30 Then Yeshua answered and said: “A certain man went down from Jerusalem to Jericho, and fell among thieves, who stripped him of his clothing, wounded him, and departed, leaving him half dead.
31 Now by chance a certain priest came down that road. And when he saw him, he passed by on the other side.
32 Likewise a Levite, when he arrived at the place, came and looked, and passed by on the other side.
33 But a certain Samaritan, as he journeyed, came where he was. And when he saw him, he had compassion.
34 So he went to him and bandaged his wounds, pouring on oil and wine; and he set him on his own animal, brought him to an inn, and took care of him.
35 On the next day, when he departed, he took out two denarii, gave them to the innkeeper, and said to him, ‘Take care of him; and whatever more you spend, when I come again, I will repay you.’
36 So which of these three do you think was neighbor to him who fell among the thieves?”
37 And he said, “He who showed mercy on him.” Then Yeshua said to him, “Go and do likewise.”

What Love Is Not

In worldly marriage, two people find they have similar interests, and they feel attracted to each other based on their shared interests. Then they mistake these mutual shared interests for love.

In the world, couples usually assume they will always feel mutual attraction based on shared interests, and then based on this, they decide to marry. But notice how this model lacks the same dedication and commitment. There is no real permanency, or unilateral commitment. That is why the world’s definition is faulty. They only commit while they are getting what they want.

It may sound strange, but the world looks at love as if it is a substance that some heavenly messenger (angel) pours out on our heads, as if from a bucket. While the good feelings are being poured out, they say it is a match made in heaven. However, relationships based on taking never last.

I once counseled a certain mother and her daughter on their relationship in Yeshua. Even though the daughter did not obey her mom, and did not respect her feelings, she was insistent that she loved her mom.

“I know I love my mom!” the daughter insisted, smiling. (The look on her face seemed to say, “And you can’t tell me otherwise!”)

Helping others in Yahweh

If we love Yeshua, then we should help Him complete this mission, which His Father has given Him. One way we can do that is to keep all His commandments.

How many marriages come together based only on the satisfaction of the partner’s wants (and not Yahweh’s wants)? And how often does it happen in these kinds of self-centered unions that something goes wrong, and it shakes their confidence that they can continue to get what they want through mutual self-interest?

The reality is that people change, and their interests also change. Sometimes there can also be a breach of faith (such as adultery, Elohim forbid). If two self-focused partners no longer feel that they share the same mutual interests, or they are no longer able to feel the bucket of warm fuzzy feelings being poured out on them from the sky, what can they do? How can their relationship carry on without commitment, and unilateral affection?

Yeshua’s example is to feel affection toward His bride, and to dedicate himself completely to her redemption. No matter if she is faithful or not, he commits himself to her unilaterally—and this is the example that husbands should follow.

Ephesim (Ephesians) 5:25-28
25 Husbands, love your wives, just as Messiah also loved the assembly and gave Himself for her,
26 that He might sanctify and cleanse her with the washing of water by the word,
27 that He might present her to Himself a glorious church, not having spot or wrinkle or any such thing, but that she should be holy and without blemish.
28 So husbands ought to love their own wives as their own bodies; he who loves his wife loves himself.

And in the same way, an earthly bride needs to feel affection toward her husband, and dedicate herself unilaterally to supporting him. Even if he does not do his part toward her, her focus needs to be on loving him, and supporting him, and giving an example to him of fearing and loving Elohim.

Kepha Aleph (1 Peter) 3:1-2
1 Wives, likewise, be submissive to your own husbands, that even if some do not obey the word, they, without a word, may be won by the conduct of their wives,
2 when they observe your chaste conduct accompanied by fear.

And not only is this the duty of earthly husbands and wives, it is also our job, as Yeshua’s bride.

Since Yeshua is ever faithful toward us, all that remains is for us to be faithful toward Him. And to do that, we need unilateral committed affection, and obedience. We need to help Him establish the kingdom His Father wants for Him to build.

Yet like the daughter who mistook her mom’s love for her as a sign that she loved her mom, some believers think they love Yeshua, because they feel Yeshua’s love and commitment toward them. Let us not make this mistake. Rather, let us move on toward committed love and affection toward Yeshua, such that we seek to help Him establish His kingdom here on earth.