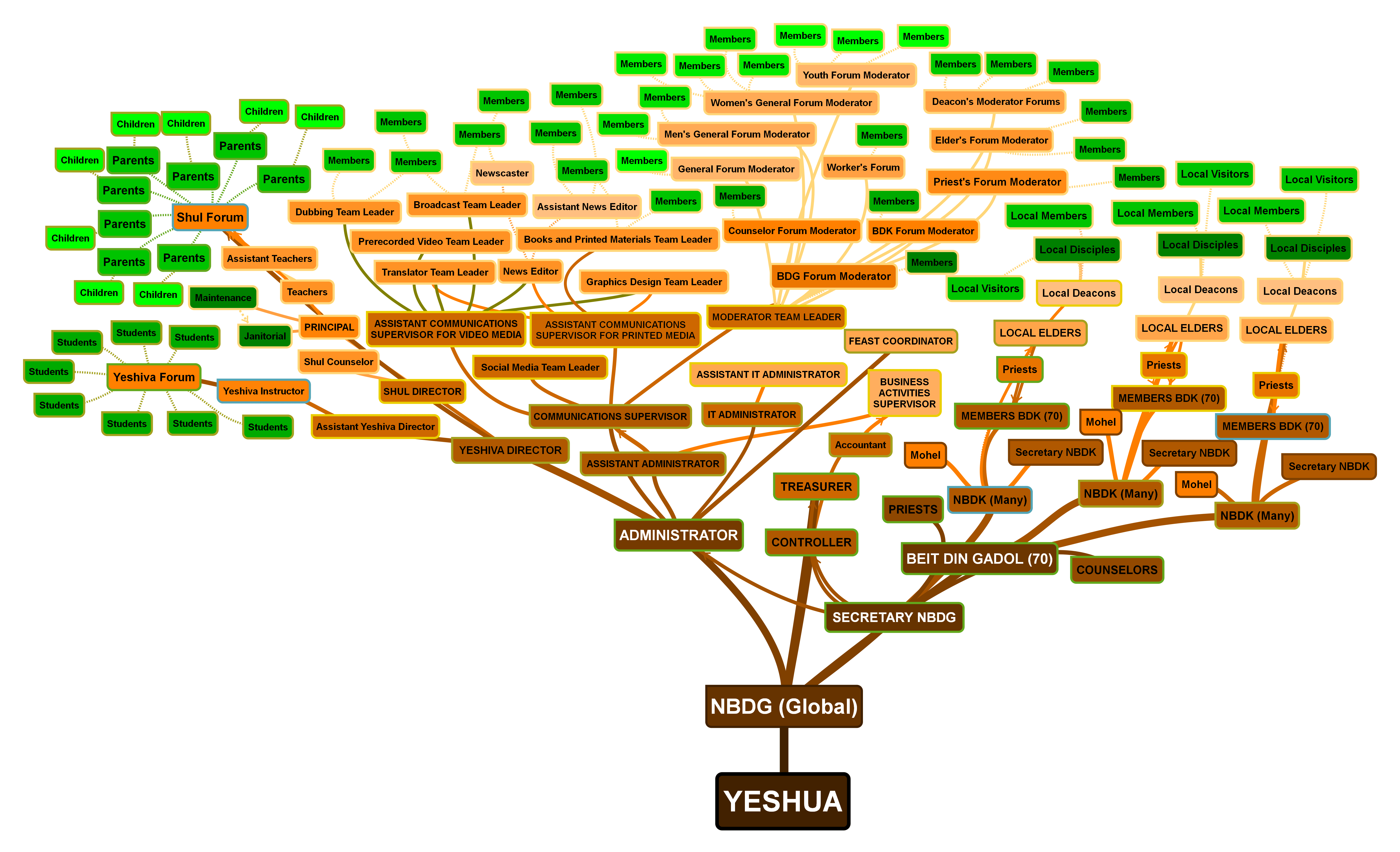 In Acts 15 Order, Torah Government, and other places, we show how Yeshua came to establish a renewed Melchizedekian priesthood, which was to go into the world, and immerse disciples in His name. (For why we immerse in Yeshua’s name only, see, “Immersion in Yeshua’s Name Alone,” in Nazarene Scripture Studies, Volume 3.)

Mattityahu (Matthew) 28:18-20
18 And Yeshua came and spoke to them, saying, “All authority has been given to Me in heaven and on earth.
19 Go therefore and make disciples of all the nations, immersing them in [My name],
20 teaching them to observe all things that I have commanded you; and lo, I am with you always, even to the end of the age.” Amein.

One of the things Yeshua commanded His disciples to do was to establish a unified global body. This singular global body was to be structured according to the order of Melchizedek. We explain this order of Melchizedek in our other works, but this body would effectively be the start of a global kingdom for Yeshua.

As we explain in Nazarene Israel and in other works, the concept of a unified global body was lost in the Great Schism of 1054, and then in the Protestant Reformation of 1517. Within the Protestant world, the fragmentation has become so bad that many people believe structure and organization is optional. However, if we will read the Renewed Covenant (New Testament) for what it says, it is clear that we are supposed to be organized, and well ordered, just as it was in Torah times. For one example, Acts 15 tells us that the returning gentile Ephraimites are supposed to come into the synagogues, where they will learn about the Torah by hearing it read aloud, as it has been read aloud in the synagogues in every city since ancient times.

Verse 21 implies that the disciples enter the synagogue environment, which is under the leadership of the ruler of the synagogue. In Torah Government and Acts 15 Order we explain that the nature of this leadership has changed since the imposition of the Birkhat HaMinim (the rabbinic curse over believers in Yeshua), but many other verses tell us that we need to have apostles who appoint (or recognize) the congregational elders.

There are other points of performance. Yet while I have been writing about how we should be structured for some time, the feedback has been that the people don’t just want me to tell them what it should look like, but that they need me to set the worship opportunity up, and let them know how they can join. So, for this reason I have been laying the groundwork for an online synagogue service, similar to what a synagogue service would have been like in Yeshua’s day (as the format has changed a little). Then, hopefully we can all meet in the synagogue on the Sabbath day, as was Yeshua’s custom.

Luqa (Luke) 4:16
16 So He came to Nazareth, where He had been brought up. And as His custom was, He went into the synagogue on the Sabbath day, and stood up to read.

This is one way we can imitate Yeshua.

But the purpose of this online synagogue service is not just to meet, it is also to provide an event around which we can begin rebuilding the tabernacle of David, which has fallen down. And it is this tabernacle (or unified body of Messiah) that needs to be set back up, if we are to finish the work the apostles set out to do.

Ma’asei (Acts) 15:13-17
13 And after they had become silent, Yaakov answered, saying, “Men and brethren, listen to me:
14 Simon has declared how Elohim at the first visited the Gentiles to take out of them a people for His name.
15 And with this the words of the prophets agree, just as it is written:
16 ‘After this I will return And will rebuild the tabernacle of David, which has fallen down; I will rebuild its ruins, And I will set it up;
17 So that the rest of mankind may seek Yahweh, Even all the Gentiles who are called by My name, Says Yahweh who does all these things.’

If this initial synagogue service is like a seed, what we need is a good plan that will allow it to grow and become like a tree branching into all the world.

This plan has to be flexible, allowing us to grow, adding not only more local synagogues, but also various types of helpers and administrators, as found in 1 Corinthians 12:28.

Qorintim Aleph (1 Corinthians) 12:28
28 And Elohim has appointed these in the assembly: first apostles, second prophets, third teachers, after that miracles, then gifts of healings, helps, administrations, varieties of tongues.

Much of the work is technical and is difficult to visualize. However, we thought this balloon diagram might be of interest to some. It shows how we propose to order the priesthood, as well as the administration and support structure. In future diagrams we may try to put this into a “tree” structure, but at the moment it is put in this format, simply to be functional. (If the font is too small, please view it on the Nazarene Israel website.) 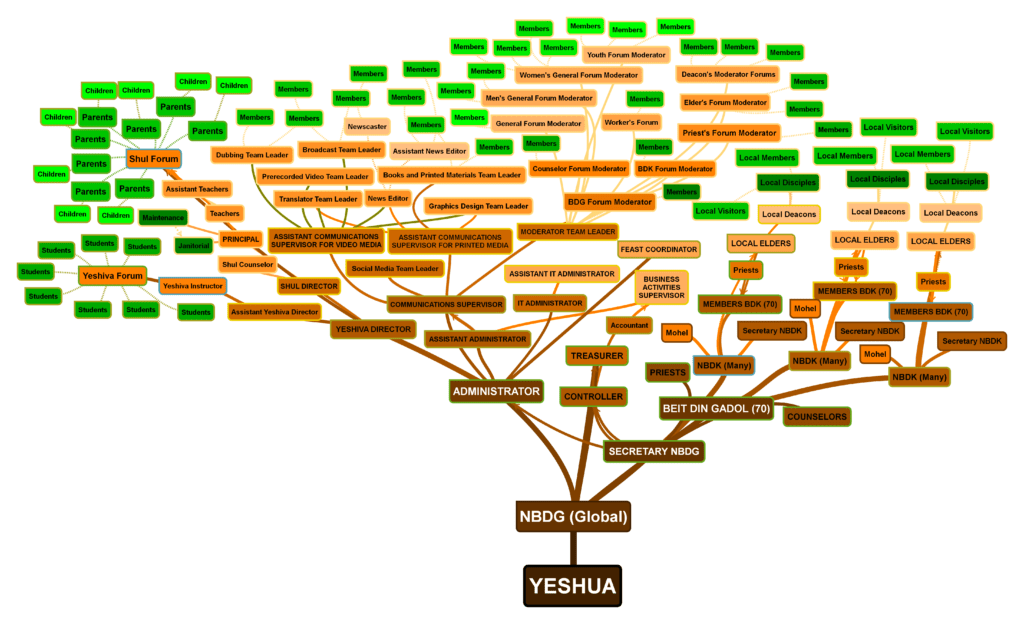 The goal is to have many assemblies, but for simplicity they are depicted as a single assembly, at the bottom right. Each assembly is ideally led by a board of at least 3 elders. These elders may have any combination of the gifts (apostle, prophet, evangelist, pastor, and teacher), but ideally as the movement grows the elders will have either the apostolic or prophetic gifts, which are the two classes of gifts which (by definition) hear Yahweh’s voice.

The elders and the priests who serve them all report to a Beit Din Katan (Small Council or Small Court). There will be one Beit Din Katan (BDK) serving each language group (English, Spanish, German, etc.). Because of our global scope, all of the Beit Din Katans report to a Beit Din Gadol (Large Council or Large Court), which is made up of the most senior apostles and elders. The Beit Din Gadol (BDG) is under the direction of the Nasi (“Prince”) of the Beit Din Gadol (which in Acts 15 was the Apostle Yaakov). This is the same as the foundation of apostles and prophets, in that everyone on the board has to have either the apostolic or prophetic gift, since the purpose of the board is to hear and transmit Yahweh’s direction.

Ephesim (Ephesians) 2:19-22
19 Now, therefore, you are no longer strangers and foreigners, but fellow citizens with the saints and members of the household of Elohim,
20 having been built on the foundation of the apostles and prophets, Yeshua Messiah Himself being the chief cornerstone,
21 in whom the whole building, being fitted together, grows into a set-apart temple in Yahweh,
22 in whom you also are being built together for a dwelling place of Elohim in the Spirit.

There are also various support positions, including a Nazarene Israel yeshiva (seminary) which will allow the priesthood to fulfill its global mission of education and training, and also provide testing and certification for leaders and teachers, so that the correct standards are taught, and tested, prior to certification.

This is an outline, and does not show every detail of the organization.