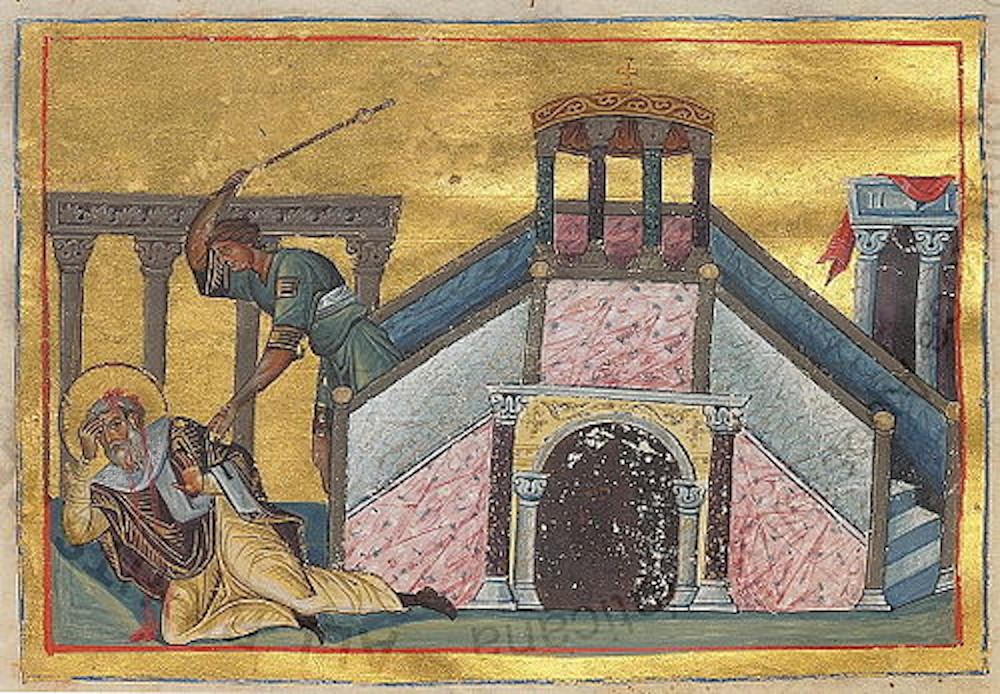 In our other studies we saw that after Yeshua’s death, the leadership of the Nazarene sect went to Yeshua’s half-brother Yaakov HaTzaddik (James the Righteous, aka the Apostle James). Because the Pharisees wanted to end the Nazarene sect they decided to kill Yaakov by stoning, even though he was otherwise one of “the most equitable of citizens.” The famous Jewish high priest and historian Flavius Josephus tells us that the Sanhedrin took the opportunity to put Yaakov to death in the leadership gap that took place in between the death of the Roman procurator Festus and the arrival of his replacement, Albanius. This is recorded in Josephus’ Antiquities of the Jews, chapter 20. (I have left the names unaltered from the translations.)

And now Caesar, upon hearing [of] the death of Festus, sent Albinus into Judea, as procurator; but the king deprived Joseph of the high priesthood, and bestowed the succession to that dignity on the son of Ananus, who was also himself called Ananus. Now the report goes, that this oldest Ananus proved a most fortunate man; for he had five sons who had all performed the office of a high priest to God, and who had himself enjoyed that dignity a long time formerly, which had never happened to any other of our high priests; but this younger Ananus, who, as we have told you already, took the high priesthood, was a bold man in his temper, and very insolent; he was also of the sect of the Sadducees, who are very rigid in judging offenders, above all the rest of the Jews, as we have already observed; when, therefore, Ananus was of this disposition, he thought he had now a proper opportunity [to exercise his authority]. Festus was now dead, and Albinus was but upon the road; so he assembled the Sanhedrin of judges, and brought before them the brother of Jesus, who was called Christ, whose name was James, and some others, [or some of his companions]; and, when he had formed an accusation against them as breakers of the law, he delivered them to be stoned: but as for those who seemed the most equitable of the citizens, and such as were the most uneasy at the breach of the laws, they disliked what was done; they also sent to the king [Agrippa], desiring him to send to Ananus that he should act so no more, for what he had already done was not to be justified. (Josephus, Antiquities 20.197-201)

Because Yaakov’s murder takes place after Festus died but before Albanius had arrived to replace him, secular history tells us that Yaakov died in the year 62 CE. However, if we read the works of the Christian chronicler Eusebius we also see that his martyrdom took place just before the Passover.

Eusebius lived from 260-339 CE. In his Ecclesiastical History, he passes down an account that he says came from Hegesippus (who lived from 110-180 CE). (Again we are leaving the names unaltered.)

James, the brother of the Lord, succeeded to the government of the Church in conjunction with the apostles. He has been called the Just by all from the time of our Saviour to the present day; for there were many that bore the name of James….
Therefore when many even of the rulers believed, there was a commotion among the Jews and Scribes and Pharisees, who said that there was danger that the whole people would be looking for Jesus as the Christ. Coming therefore in a body to James they said, ‘We entreat you, restrain the people; for they are gone astray in regard to Jesus, as if he were the Christ. We entreat you to persuade all that have come to the feast of the Passover concerning Jesus; for we all have confidence in you. For we bear you witness, as do all the people, that you are just, and do not respect persons. [Matthew 22:16]
Therefore, persuade the multitude not to be led astray concerning Jesus. For the whole people, and all of us also, have confidence in you. Stand therefore upon the pinnacle of the temple, that from that high position you may be clearly seen, and that your words may be readily heard by all the people. For all the tribes, with the Gentiles also, have come together on account of the Passover.’

Apparently Yaakov agreed to speak to the people, but not to defame Yeshua. Rather, he took the opportunity to speak on Yeshua’s behalf.

The aforesaid Scribes and Pharisees therefore placed James upon the pinnacle of the temple, and cried out to him and said: ‘You just one, in whom we ought all to have confidence, forasmuch as the people are led astray after Jesus, the crucified one, declare to us, what is the gate of Jesus.’
And he answered with a loud voice, ‘Why do you ask me concerning Jesus, the Son of Man? He himself sits in heaven at the right hand of the great Power, and is about to come upon the clouds of heaven.’
And when many were fully convinced and gloried in the testimony of James, and said, ‘Hosanna to the Son of David,’ these same Scribes and Pharisees said again to one another, ‘We have done badly in supplying such testimony to Jesus. But let us go up and throw him down, in order that they may be afraid to believe him.’
And they cried out, saying, ‘Oh! Oh! The just man is also in error.’ And they fulfilled the Scripture written in Isaiah, ‘Let us take away the just man, because he is troublesome to us: therefore they shall eat the fruit of their doings.’
So they went up and threw down the just man, and said to each other, ‘Let us stone James the Just.’ And they began to stone him, for he was not killed by the fall; but he turned and knelt down and said, ‘I entreat you, Lord God our Father, forgive them, for they know not what they do.’ [Luke 23:34]
And while they were thus stoning him one of the priests of the sons of Rechab, the son of the Rechabites, who are mentioned by Jeremiah the prophet, cried out, saying, ‘Stop. What are you doing? The just one prays for you.’
And one of them, who was a fuller, took the club with which he beat out clothes and struck the just man on the head. And thus he suffered martyrdom. And they buried him on the spot, by the temple, and his monument still remains by the temple. [Eusebius, Ecclesiastical History (History of the Church), quoting Hegesippus, 2.23.4,10-18]

Apparently the Pharisees and Sadducees believed that they would be able to disperse the Nazarenes by striking the new under-shepherd of the sheep, just as they had earlier struck Yeshua.

However, their plan failed, because the truth cannot be destroyed. The Spirit of Yeshua raised up new leadership, and the sect of the Nazarenes carried on, to the glory of our King.