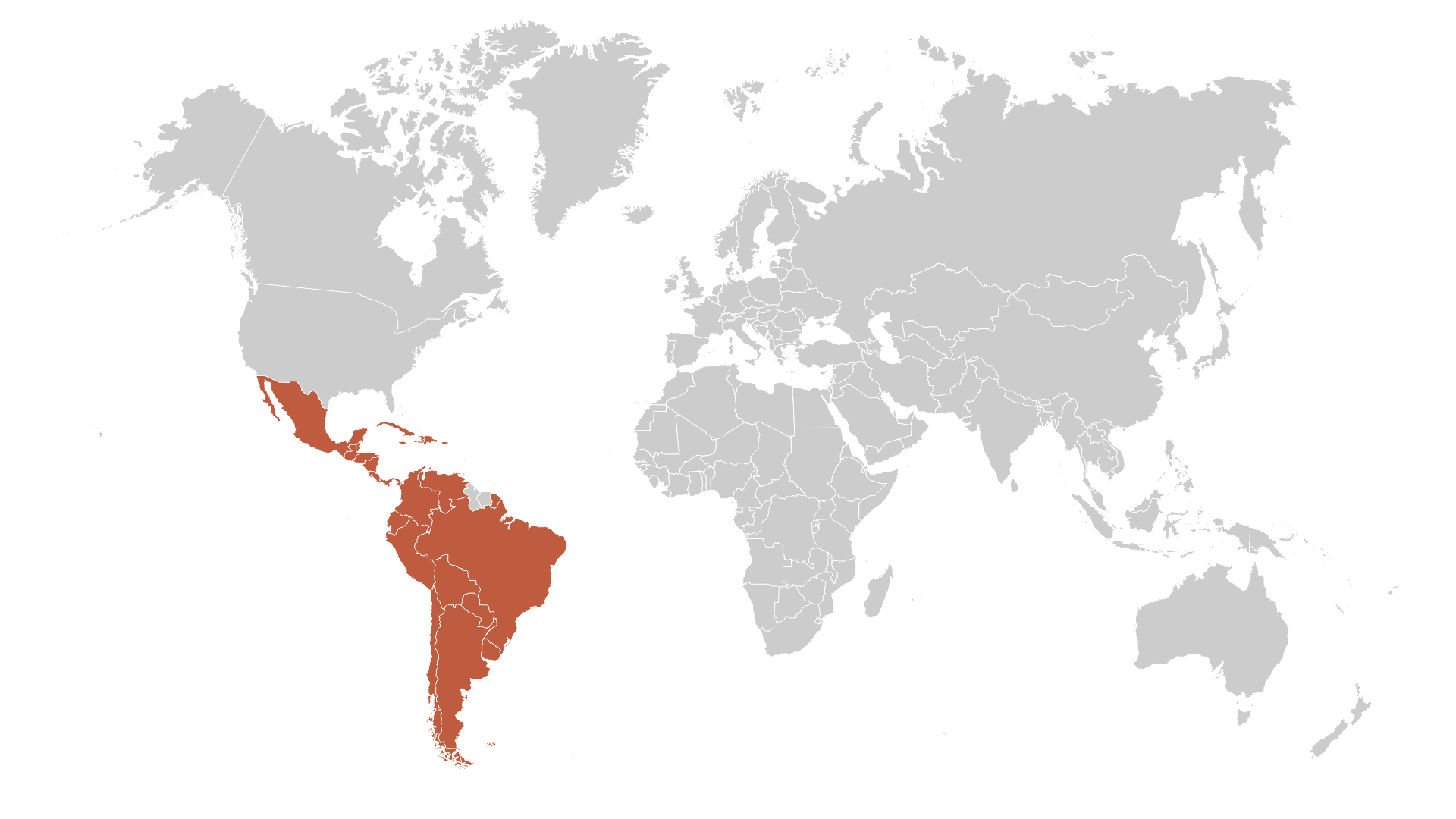 This article will detail some of my reasons for wanting to move the Nazarene Israel ministry headquarters to Latin America.

Researchers into the migrations of the tribes such as Davidiy, Collins, White, and others tell us that Ham went south into Africa. Yaphet went north into what later became Christian Europe. Shem went east into Asia and crossed the land bridge into the Americas. Thus, the native American indigenous people are ethnic Shemites (which is the same branch from which Israel descends).

In perhaps the most far-reaching prophecy of all time, Noach told us that Yaphet would one day dwell in the tents of Shem.

B’reisheet (Genesis) 9:27
27 “May Elohim enlarge Yaphet, And may he dwell in the tents of Shem; And may Canaan be his servant.”

When we look up the name Yaphet in Strong’s Hebrew Concordance, we see that it refers to expansiveness (and is also associated with beauty).

As we saw in Nazarene Israel, the ten tribes of the northern house of Ephraim were taken into the Assyrian captivity for failing to keep the Torah. However, after their prophesied time of captivity was over they did not repent, and so their time of punishment was multiplied times seven, in keeping with Leviticus 26:18.

Vayiqra (Leviticus) 26:18
18 “And after all this, if you do not obey Me, then I will punish you seven times more for your sins.”

The Ephraimites were scattered all four directions, to be mixed and mingled with every family, every nation, and every clan, in every nation on earth. However, there was also a prophetic body of Ephraimites which moved north and west with the rise and fall of empires, eventually settling in what later became Protestant northwestern Europe. Researchers such as Davidiy and Collins tend to associate certain tribes with certain nations. For example, the tribe of Gad is believed to have settled in the Scandinavian Viking nations of Norway, Sweden, and Denmark. 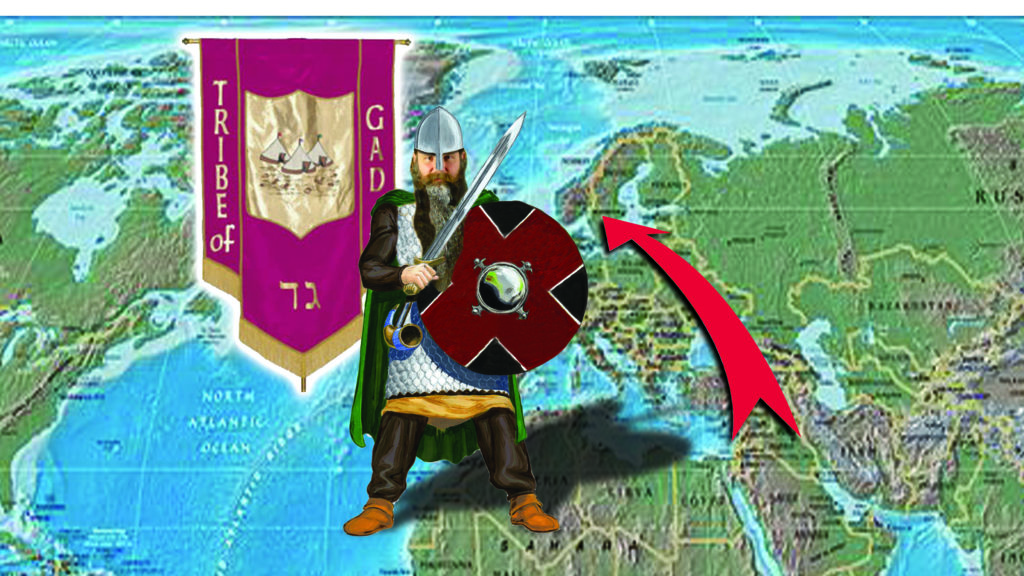 We will come back to the Viking Gadites in a moment, but shortly after Yahweh called me to repentance I asked Him please to show me from the Tanach (“Old” Testament) whether the Messiah had already come, or not. He showed me two passages which prove that not only had the Messiah Yeshua already come, but that He expects Nazarene Israel to be establishing the Halacha (i.e., the manner of observing the faith) in today’s times. This proof has to do with the interplay of two passages in the Torah, concerning the tribes of Judah and Gad.

First, Genesis 49:10 tells us the tribe of Judah was to hold both the scepter (the kingship) and the portion of the lawgiver (the right to set the Halacha) until Shiloh (Messiah) came.

B’reisheet (Genesis) 49:10
10 The scepter shall not depart from Judah, Nor a lawgiver [וּמְחֹקֵק] from between his feet, Until Shiloh [Messiah] comes; And to Him shall be the obedience of the people.

The word for lawgiver in Hebrew is “m’khokek” [מְחֹקֵק]. The root of this word is Strong’s OT:2710, chaqaq. The idea is that someone who hears Yahweh’s voice (i.e., a judge, a prophet, or an apostle) will listen for what Yahweh is saying in the Spirit, and then inscribe, chisel, or “hack” the judgment into stone or metal tablets.

Since Judah occupied the kingship, Judah would have the authority to set the Halacha until Messiah (Shiloh) came. However, Deuteronomy 33:20-21 says that when Messiah Yeshua came, the lawgiver’s portion would be hidden in the tribe of Gad.

Devarim (Deuteronomy) 33:20-21
20 And of Gad he said: “Blessed is he who enlarges Gad; He dwells as a lion, And he shall tear off the arm, also the crown.
21 He provided the first part for himself, Because there the lawgiver’s portion [מְחֹקֵק] was hidden. He came with the heads of the people; He administered the justice of Yahweh, And His judgments with Israel.”

Deuteronomy 33:20-21 tells us that Gad shall tear off the arm (military power), and also the crown (government). The Gadites have always seized the crown (kingship, government). Since they hold the power, it gives them the ability to set the halachah, telling the people how to worship.

Roman Catholic Vikings settled the Normandy region in France, calling themselves the Normans (North-men). The Christian Normans then invaded England under William the Conqueror, seizing the crown of England. Later, King Henry VIII rebelled against the Catholics, and brought England to Protestantism. It was Protestant England which then conquered the British Empire (which is prophetic Manasseh), and colonized North America, including the colonies which later became the United States. In all of this, they were able to establish Protestantism as the halacha of their day.

Yirmeyahu (Jeremiah) 51:45-46
45 “My people, go out of the midst of her! And let everyone deliver himself from the fierce anger of Yahweh.
46 And lest your heart faint, And you fear for the rumor that will be heard in the land (A rumor will come one year, And after that, in another year A rumor will come, And violence in the land, Ruler against ruler)…”

Latin America is a good choice for relocation for many reasons. For one, since the base population is Shemite it would fulfill Genesis 9:27, with Yaphet dwelling in the tents of Shem. Further, it could help advance the Great Commission to the next level.

The population is falling away from Catholicism due to the sexual scandals and abuses of the Catholic Church. Protestant churches are springing up everywhere as the Latin American people begin to look to the Scriptures for more truth. This is a witnessing opportunity.

However, many Protestants have concerns about Latin America, since the economy is not as strong, and there can be more petty crime. It can help to understand the roots of these behaviors, to know how to counter them.

Because the Protestant Europeans wanted land, they portrayed the indigenous people as if they were akin to the Canaanites. In their minds at the time this justified wiping them out, in genocide. The few who were left were then moved to reservations.

While the Protestants sought land, the Spanish mostly sought gold. Because gold was so common in the new world, the natives did not realize how valuable it was, and so they traded it for common items (such as cups, utensils, and clothing). Then when the gold ran out the Spanish enslaved the population, making them work in the fields, and in the gold mines. Many natives committed suicide rather than be slaves, so the Spanish imported slaves from Africa. Even after there was emancipation from slavery and independence was won from Spain, most of the wealth was still held by those of European heritage. For example, in Colombia, 81% of the wealth is held by 1% of the population. Understandably, many of the native and African peoples are not happy with this, and there are repeated calls to institute socialist and communist reforms. However, these invariably fail—but not because Yahweh’s social programs are wrong, but rather because secular social programs are wrong. Secular states are incapable of properly administering any social program apart from Yahweh’s governmental order.

In (“From Zechariah to Revelation Order” in Nazarene Scripture Studies, Volume 3), we discussed how we are called to organize ourselves by the Revelation order of horses, first White, then Red, then Black, and then finally Green. This means first and foremost we are to love and serve Yeshua (white horse). Next, we are to love and serve our (red horse) brothers (including economically, with social supports). Only then should we look to build up our (black horse) wealth. Lastly, we are called to establish green horse corporate judgment within the nation. This is the same order as many of the Shemite Latin American nations follow.

Ancient Shemite Israel was largely agricultural, and also community oriented. Similarly, Shemite Latin America is largely agricultural, and community oriented. The Latin people also place more emphasis on faith, family, and friends than they do on wealth. This means that rather than climb corporate ladders, they spend time with each other. This may seem wrong to many Protestants and Jews, but Yeshua tells us that there are many who are last, who will become first.

Luqa (Luke) 13:29-30
29 “They will come from the east and the west, from the north and the south, and sit down in the kingdom of Elohim.
30 And indeed there are last who will be first, and there are first who will be last.”

Unlike the Gadite-led United States, Nazarene Israel is not a military power. Rather, Nazarene Israel is the original faith of the apostles, which was reborn within the United States. We seek to restore the original halachah. And just as Gadite US military power is projected around the world, by moving to a safe base of operations in Latin America, Nazarene Israel will then be able to spread the true halachah first into the Spanish language block, and then into other language blocks, taking the faith once delivered to the saints to the world in fulfillment of the Great Commission.