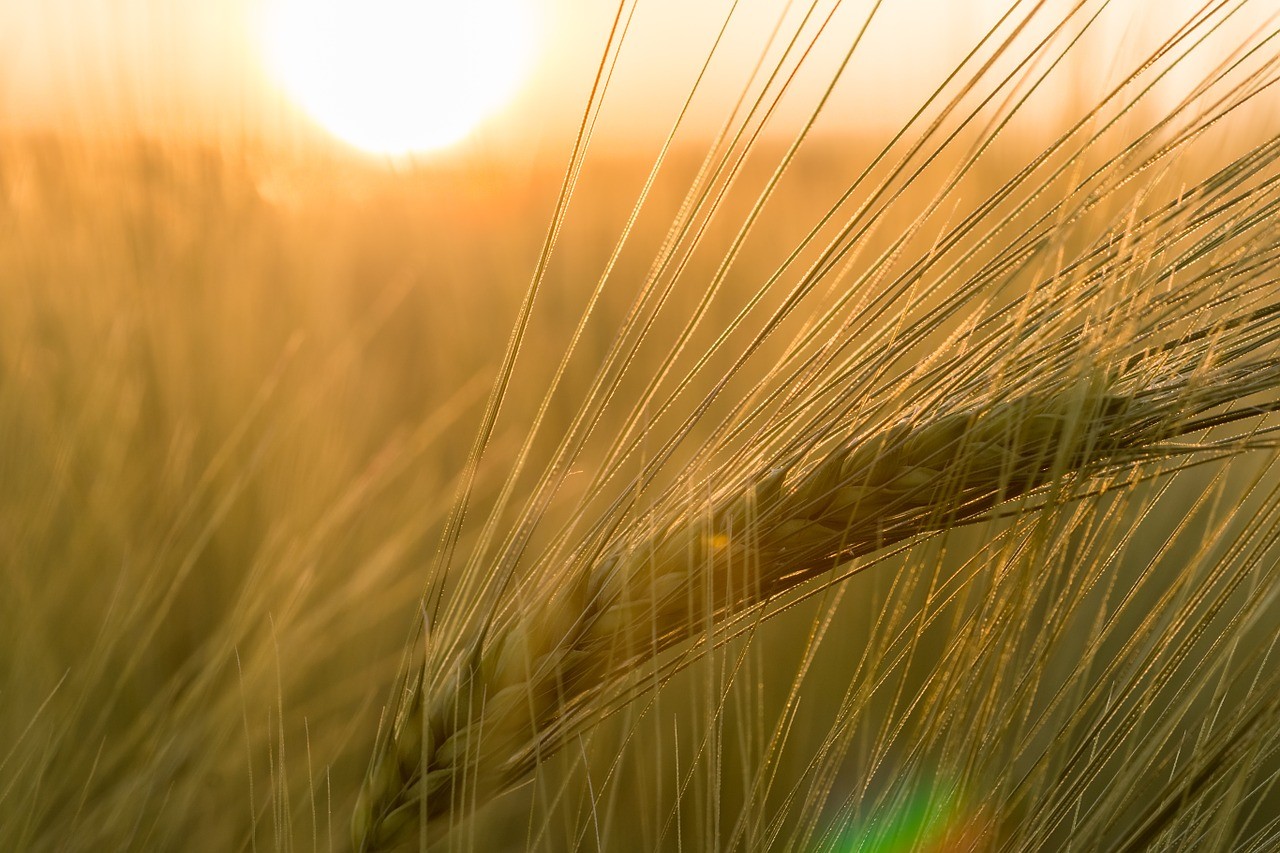 Scripture tells us that men are like trees. For example, when Yeshua healed the blind man’s eyes, he said he saw “men like trees, walking.”

Marqaus (Mark) 8:22-25
22 Then He came to Bethsaida; and they brought a blind man to Him, and begged Him to touch him.
23 So He took the blind man by the hand and led him out of the town. And when He had spit on his eyes and put His hands on him, He asked him if he saw anything.
24 And he looked up and said, “I see men like trees, walking.”
25 Then He put His hands on his eyes again and made him look up. And he was restored and saw everyone clearly.

Is it possible that men could also be like barley? Kepha (Peter) tells us that all flesh is as grass.

Kepha Aleph (1 Peter) 1:22-25
22 Since you have purified your souls in obeying the truth through the Spirit in sincere love of the brethren, love one another fervently with a pure heart,
23 having been born again, not of corruptible seed but incorruptible, through the word of Elohim which lives and abides forever,
24 because “All flesh is as grass, And all the glory of man as the flower of the grass. The grass withers, And its flower falls away,
25 But the word of Yahweh endures forever.” Now this is the word which by the Good News was preached to you.

The only grasses that exist in Israel today are the cereal grasses (such as barley, wheat, rye, etc.). Common lawn grasses (such as fescue, bluegrass, etc.) do not exist, and it seems likely that they did not exist in the first century either. This leads us to wonder if the “much grass” that is mentioned in John 6:10 may have been volunteer barley, as volunteer barley would have been tall and ample about the time of the Passover in John 6.

Yochanan (John) 6:4-11
4 Now the Passover, a feast of the Jews, was near.
5 Then Yeshua lifted up His eyes, and seeing a great multitude coming toward Him, He said to Philip, “Where shall we buy bread, that these may eat?”
6 But this He said to test him, for He Himself knew what He would do.
7 Philip answered Him, “Two hundred denarii worth of bread is not sufficient for them, that every one of them may have a little.”
8 One of His disciples, Andrew, Simon Peter’s brother, said to Him,
9 “There is a lad here who has five barley loaves and two small fish, but what are they among so many?”
10 Then Yeshua said, “Make the people sit down.” Now there was much grass in the place. So the men sat down, in number about five thousand.
11 And Yeshua took the loaves, and when He had given thanks He distributed them to the disciples, and the disciples to those sitting down; and likewise of the fish, as much as they wanted.

Barley grows as a winter crop in Israel, and it grows wild near Bethsaida. This wild barley begins to mature about Passover time, as the winds and the weather changes from cold to warm. These hotter winds are called shorav winds. They pass over the barley and bring it into its final stages of ripening. We will come back to this.

When Kepha (Peter) says that men are as grass, he is quoting Psalm 103, which was written by King David in the Spirit.

Tehillim (Psalms) 103:15-18
15 As for man, his days are like grass; As a flower of the field, so he flourishes.
16 For the wind passes over it, and it is gone, And its place remembers it no more.
17 But the mercy of Yahweh is from everlasting to everlasting On those who fear Him, And His righteousness to children’s children,
18 To such as keep His covenant, And to those who remember His commandments to do them.

The Hebrew word for Spirit is the same as the Hebrew word for wind. That word is ruach (רוח). So what King David said by the Spirit is that men are like the cereal grasses. The ruach (Spirit) passes over them, and then one day they are gone. And yet, the mercy of Yahweh remains from everlasting to everlasting on those who fear Him, and keep His covenant, and remember His commandments, to do them. The only thing is, it is not possible to keep the commandments in our own power and strength. To do them correctly we have to die to our lives, as a grain of wheat or barley is planted in the ground, and then grows to bear good fruit. Unless we die to ourselves like this, there is no eternal life in us.

Yochanan (John) 12:24-25
24 “Most assuredly, I say to you, unless a grain of wheat falls into the ground and dies, it remains alone; but if it dies, it produces much grain.
25 He who loves his life will lose it, and he who hates his life in this world will keep it for eternal life.”

Kepha also says we need to have our souls purified so that we are no longer born of corruptible human seed, but of the incorruptible seed of Yahweh’s Spirit, so that we manifest sincere love for the brethren.

Kepha Aleph (1 Peter) 1:22-25
22 Since you have purified your souls in obeying the truth through the Spirit in sincere love of the brethren, love one another fervently with a pure heart,
23 having been born again, not of corruptible seed but incorruptible, through the word of Elohim which lives and abides forever,
24 because “All flesh is as grass, And all the glory of man as the flower of the grass. The grass withers, And its flower falls away,
25 But the word of Yahweh endures forever.” Now this is the word which by the Good News was preached to you.

Shaul (Paul) also witnesses to the same idea, saying that before we can attain eternal life, first we must die, even as a grain of wheat or some other grain (such as barley) is sown into the ground.

Qorintim Aleph (1 Corinthians) 15:35-37
35 But someone will say, “How are the dead raised up? And with what body do they come?”
36 Foolish one! What you sow is not made alive unless it dies.
37 And what you sow, you do not sow that body that shall be, but mere grain — perhaps wheat or some other grain.

Further, bread is normally made from cereal grains, and Yeshua tells us that He is the living bread from heaven.

Luqa (Luke) 8:11-15
11 “Now the parable is this: The seed is the word of Elohim.
12 Those by the wayside are the ones who hear; then the devil comes and takes away the word out of their hearts, lest they should believe and be saved.
13 But the ones on the rock are those who, when they hear, receive the word with joy; and these have no root, who believe for a while and in time of temptation fall away.
14 Now the ones that fell among thorns are those who, when they have heard, go out and are choked with cares, riches, and pleasures of life, and bring no fruit to maturity.
15 But the ones that fell on the good ground are those who, having heard the word with a noble and good heart, keep it and bear fruit with patience.”

Yeshua also used grains in His parables to illustrate the differences between disciples and believers. The noble grains represent disciples because they yield good fruit. That is, they tithe, give offerings, donate time, and do all they can to help build Yeshua’s kingdom in a real way. This comes not from fear, but from love for Yeshua. Yet in addition to the good grains there are also what are called the tares, or darnel. These are grasses that look like noble grains up until the seed head appears. However, then it is seen that they are not actually good grains, because they do not yield good fruit. They may rest on the Sabbath and festivals, and may consume the word like water and fertilizer, but they do not perform the good works that help to build Yeshua’s unified global kingdom.

Mattityahu (Matthew) 13:24-26
24 Another parable He put forth to them, saying: “The kingdom of heaven is like a man who sowed good seed in his field;
25 but while men slept, his enemy came and sowed tares among the wheat and went his way.
26 But when the grain had sprouted and produced a crop, then the tares also appeared.”

If we are willing to accept it, the difference between the tares (believers) and the disciples (good grain) is that the disciples (good grains) are truly born from above, while the mere believers are self-deceived (tares). Because we are of corruptible human seed, we must receive the good spiritual Seed from above. This causes us to want to cultivate the soil of our lives (i.e., our hearts), so that His implanted seed can find good soil, and take root. For this to happen, we must truly be born again.

Yahweh’s wisdom is amazing. It is beyond all seeking out. Even His festivals witness that we are created like the grass of the field. While we may flourish for a time, after the Spirit has passed over us, and we have ripened, then we are no more. Those of us who did not bear good fruit will be gone forever, as chaff that is burned with unquenchable fire.

Mattityahu (Matthew) 3:12
12 “His winnowing fan is in His hand, and He will thoroughly clean out His threshing floor, and gather His wheat into the barn; but He will burn up the chaff with unquenchable fire.”

Yet for the few who receive the Spirit and the implanted word into their hearts, and with patience bear the good fruit of helping to build Yeshua’s unified global kingdom, the mercy of Yahweh will be upon them and their children from everlasting to everlasting.