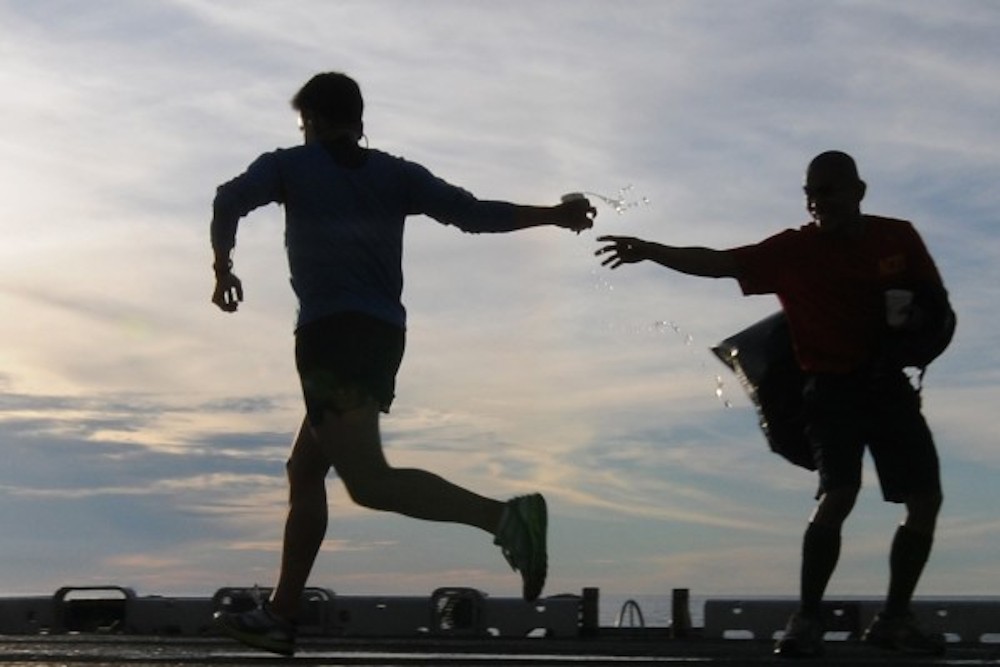 You are a soldier deployed with King David. Due to Yahweh’s favor, our people have prevailed.

Divre HaYamim Aleph (1 Chronicles) 11:10-14
10 Now these were the heads of the mighty men whom David had, who strengthened themselves with him in his kingdom, with all Israel, to make him king, according to the word of Yahweh concerning Israel.
11 And this is the number of the mighty men whom David had: Yashobeam the son of a Hachmonite, chief of the captains; he had lifted up his spear against three hundred, killed by him at one time.
12 After him was Eleazar the son of Dodo, the Ahohite, who was one of the three mighty men.
13 He was with David at Pasdammim. Now there the Philistines were gathered for battle, and there was a piece of ground full of barley. So the people fled from the Philistines.
14 But they stationed themselves in the middle of that field, defended it, and killed the Philistines. So Yahweh brought about a great victory.

Yahweh helps you win a great battle, but the war rages on. The Palestinians have encamped in the valley of Rephaim, and so King David has gone to the bunker.

Divre HaYamim Aleph (1 Chronicles) 11:15-16
15 Now three of the thirty chief men went down to the rock to David, into the cave of Adullam [the bunker]; and the army of the Philistines encamped in the Valley of Rephaim.
16 David was then in the stronghold, and the garrison of the Philistines was then in Bethlehem.

Battle fatigue sets in. The mighty King David’s Energizer Bunny batteries run low. He looks off into the distance, and wishes for the end of the battle, fairly gasping with longing, “Oh, that someone would give me a drink of water from the well of the house of War, which is by the gate!” Because that water has special qualities for Israel in battle (hence, its name).

Divre HaYamim Aleph (1 Chronicles) 11:17
17 And David said with longing, “Oh, that someone would give me a drink of water from the well of Bethlehem, which is by the gate!”

You aren’t stupid, and you weren’t born yesterday. King David has iron discipline. He is the President Vladimir Putin of ancient Israel. He better than all men knows the importance of maintaining appearances in battle, so as to bolster and encourage one’s men. As a king, one is never more “on duty” than in war, but King David has become so fatigued that he actually spoke a longing out loud.

Alarm bells go off. This will not be good for morale, for the people to see their champion fatigued. You pray, and Yahweh shows you what you have to do. You smack your two blood brothers on the back to Hebrew them up, you mount your best armored chariots, and you bust out.

Smashing into enemy lines takes them by surprise on the way out. You dare not lose, because the troops need to see their king stand strong against the Palestinians, who have come for revenge.

Getting the water, you pray for all speed and strength, and, taking a different return route you are able to smash once again back through to the bunker. It is the ancient equivalent of a stealth fighter-bomber run.

Divre HaYamim Aleph (1 Chronicles) 11:18
18 So the three broke through the camp of the Philistines, drew water from the well of the house of War that was by the gate, and took it and brought it to David. Nevertheless David would not drink it, but poured it out to Yahweh.

Okay. You and your two best buds ever just risked your lives to bring King David a cup of water in Yahweh’s name, so that the leader of His armies might be at his best, during the war. But David has taken such courage in your valor that he no longer needs the cup of water, so he pours it out to Yahweh. He says he cannot drink this water, equating it with the blood-guilt of your lives, in that you risked your lives to bring it to him.

King David truly loves his men, and is beloved.

Divre HaYamim Aleph (1 Chronicles) 11:19
19 And he said, “Far be it from me, O my Elohim, that I should do this! Shall I drink the blood of these men who have put their lives in jeopardy? For at the risk of their lives they brought it.” Therefore he would not drink it. These things were done by the three mighty men.

Generations later, your descendants are chosen to be disciples in Yeshua’s renewed Melchizedekian order. He tells you that whoever brings you a cup of water in His Name, he shall by no means lose his reward.

Marqaus (Mark) 9:38-41
38 Now Yochanan answered Him, saying, “Teacher, we saw someone who does not follow us casting out demons in Your name, and we forbade him because he does not follow us.”
39 But Yeshua said, “Do not forbid him, for no one who works a miracle in My name can soon afterward speak evil of Me.
40 For he who is not against us is on our side.
41 For whoever gives you a cup of water to drink in My name, because you belong to Messiah, assuredly, I say to you, he will by no means lose his reward.”

In the land we bring our three tithes, plus gifts, plus offerings up to Jerusalem three times a year. However, in the dispersion, we are instead to set something apart on the first day of the week, joyfully, that Yahweh’s minister does not need to ask a collection (because it will already be waiting for him, to come and pick up their gift).

Qorintim Aleph (1 Corinthians) 16:1-2
1 Now concerning the collection for the saints, as I have given orders to the churches of Galatia, so you must do also:
2 On the first day of the week let each one of you set something apart, storing up as he may prosper, that there be no collections when I come.

Knowing these things, what kind of cup of water should we set apart unto Him on the first day of the week?