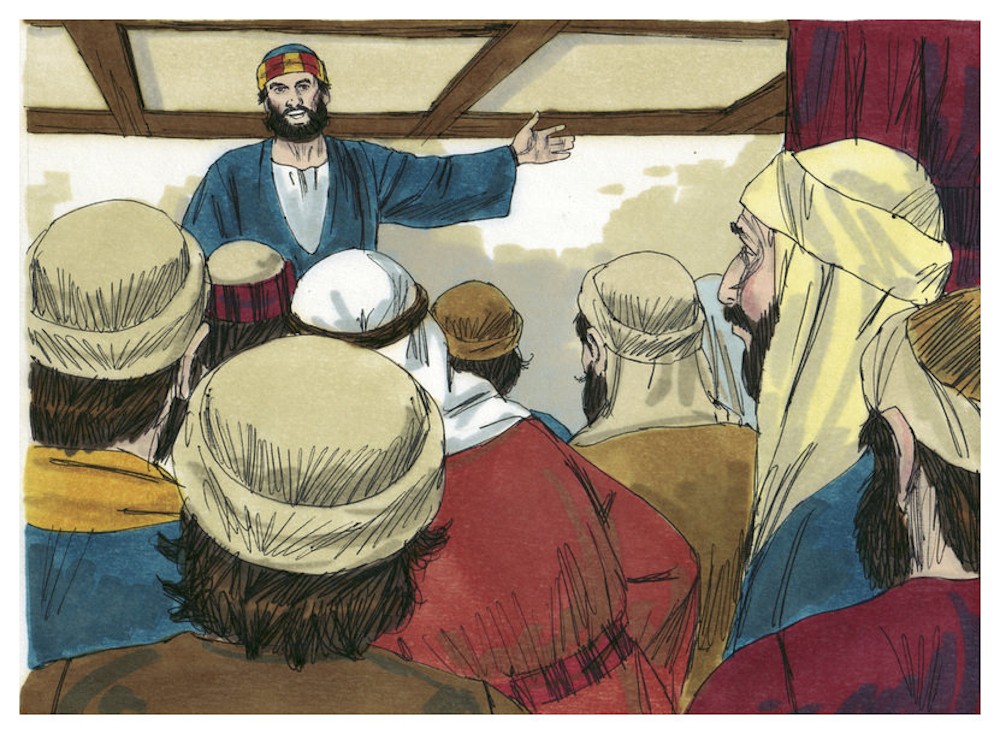 Dare we ask? What’s the difference between a believer and a disciple, anyway? And why would it matter?

Mark tells us that Yeshua had compassion on the four thousand believers who came to Him. Yeshua healed their sicknesses, and He also performed a miracle to feed them; but then He sent them away.

Marqaus (Mark) 8:1-10
1 In those days, the multitude being very great and having nothing to eat, Yeshua called His disciples to Him and said to them,
2 “I have compassion on the multitude, because they have now continued with Me three days and have nothing to eat.
3 And if I send them away hungry to their own houses, they will faint on the way; for some of them have come from afar.”
4 Then His disciples answered Him, “How can one satisfy these people with bread here in the wilderness?”
5 He asked them, “How many loaves do you have?” And they said, “Seven.”
6 So He commanded the multitude to sit down on the ground. And He took the seven loaves and gave thanks, broke them and gave them to His disciples to set before them; and they set them before the multitude.
7 They also had a few small fish; and having blessed them, He said to set them also before them.
8 So they ate and were filled, and they took up seven large baskets of leftover fragments.
9 Now those who had eaten were about four thousand. And He sent them away,
10 immediately got into the boat with His disciples, and came to the region of Dalmanutha.

In Mark 6, when Yeshua’s disciples were weary, He told them to rest; but the crowds followed them. And having compassion on the crowd, Yeshua taught them, and fed them, and then He sent them away.

Marqaus (Mark) 6:30-45
30 Then the apostles gathered to Yeshua and told Him all things, both what they had done and what they had taught.
31 And He said to them, “Come aside by yourselves to a deserted place and rest a while.” For there were many coming and going, and they did not even have time to eat.
32 So they departed to a deserted place in the boat by themselves.
33 But the multitudes saw them departing, and many knew Him and ran there on foot from all the cities. They arrived before them and came together to Him.
34 And Yeshua, when He came out, saw a great multitude and was moved with compassion for them, because they were like sheep not having a shepherd. So He began to teach them many things.
35 When the day was now far spent, His disciples came to Him and said, “This is a deserted place, and already the hour is late.
36 Send them away, that they may go into the surrounding country and villages and buy themselves bread; for they have nothing to eat.”
37 But He answered and said to them, “You give them something to eat.” And they said to Him, “Shall we go and buy two hundred denarii worth of bread and give them something to eat?”
38 But He said to them, “How many loaves do you have? Go and see.” And when they found out they said, “Five, and two fish.”
39 Then He commanded them to make them all sit down in groups on the green grass.
40 So they sat down in ranks, in hundreds and in fifties.
41 And when He had taken the five loaves and the two fish, He looked up to heaven, blessed and broke the loaves, and gave them to His disciples to set before them; and the two fish He divided among them all.
42 So they all ate and were filled.
43 And they took up twelve baskets full of fragments and of the fish.
44 Now those who had eaten the loaves were about five thousand men.
45 Immediately He made His disciples get into the boat and go before Him to the other side, to Bethsaida, while He sent the multitude away.

We see Yeshua feeding the believers again in John 6. In verse 15 the people wanted to make Him their king, but again he withdrew.

Yochanan (John) 6:11-15
11 And Yeshua took the loaves, and when He had given thanks He distributed them to the disciples, and the disciples to those sitting down; and likewise of the fish, as much as they wanted.
12 So when they were filled, He said to His disciples, “Gather up the fragments that remain, so that nothing is lost.”
13 Therefore they gathered them up, and filled twelve baskets with the fragments of the five barley loaves which were left over by those who had eaten.
14 Then those men, when they had seen the sign that Yeshua did, said, “This is truly the Prophet who is to come into the world.”
15 Therefore when Yeshua perceived that they were about to come and take Him by force to make Him king, He departed again to the mountain by Himself alone.

After Yeshua left the believers He walked across the lake, to rejoin His disciples; and when the people realized Yeshua had left them, they got into boats, to seek Him out again.

Yochanan (John) 6:24-26
24 When the people therefore saw that Yeshua was not there, nor His disciples, they also got into boats and came to Capernaum, seeking Yeshua.
25 And when they found Him on the other side of the sea, they said to Him, “Rabbi, when did You come here?”
26 Yeshua answered them and said, “Most assuredly, I say to you, you seek Me, not because you saw the signs, but because you ate of the loaves and were filled.”

Why did Yeshua send the multitude of believers away, to spend more time alone with His disciples? To answer this question, first let us take a closer look at how He called His disciples to serve Him.

When His ministry was just beginning, Yeshua called out to His disciples, who recognized His anointing, and immediately left their nets, to follow Him.

Mattityahu (Matthew) 4:18-22
18 And Yeshua, walking by the Sea of Galilee, saw two brothers, Shimon called Kepha, and Andrei his brother, casting a net into the sea; for they were fishermen.
19 Then He said to them, “Follow Me, and I will make you fishers of men.”
20 They immediately left their nets and followed Him.
21 Going on from there, He saw two other brothers, Ya’akov the son of Zabdai, and Yochanan his brother, in the boat with Zabdai their father, mending their nets. He called them,
22 and immediately they left the boat and their father, and followed Him.

Like their father Avraham before them, the disciples left everything in order to follow at Elohim’s word.

The disciples took care of things that Yeshua did not need to attend to. For example, Kepha (Peter) and Yochanan (John) went to prepare the Passover meal.

Yeshua’s disciples also went to get the donkey and colt that Yeshua would later ride. These things may seem beneath those who would later lead Yeshua’s kingdom here on earth, but one imagines the disciples’ hearts were glad to do anything they could to help further their Master’s kingdom, no matter what it was.

Mattityahu (Matthew) 21:1-3
1 Now when they drew near Jerusalem, and came to Bethphage, at the Mount of Olives, then Yeshua sent two disciples,
2 saying to them, “Go into the village opposite you, and immediately you will find a donkey tied, and a colt with her. Loose them and bring them to Me.
3 And if anyone says anything to you, you shall say, ‘The Master has need of them,’ and immediately he will send them.”

So what about us, dear friends? Why are we here? Are we looking to get healed, to get fed, or to get some free instruction? Or are we here because nothing really matters to us anymore but the opportunity to spend the rest of our lives expanding Yeshua’s kingdom?

Mattityahu (Matthew) 28:18-20
18 And Yeshua came and spoke to them, saying, “All authority has been given to Me in heaven and on earth.
19 Go therefore and make disciples of all the nations, immersing them in the name of the Father and of the Son and of the Set-apart Spirit,
20 teaching them to observe all things that I have commanded you; and lo, I am with you always, even to the end of the age.” Amein.

We need to put what we know into action, because if we know what Yeshua wants us to do, but we fail to do it, it is reckoned to us as sin.

We are not justified by knowledge: we are justified by His favor. That being the case, is He more likely to favor those who are doing everything they can think of, to expand His empire? Or those who read His words, but don’t put them into action?

Wouldn’t an earthly king likely be irritated with subjects who knew what he wanted them to do, but didn’t do it?