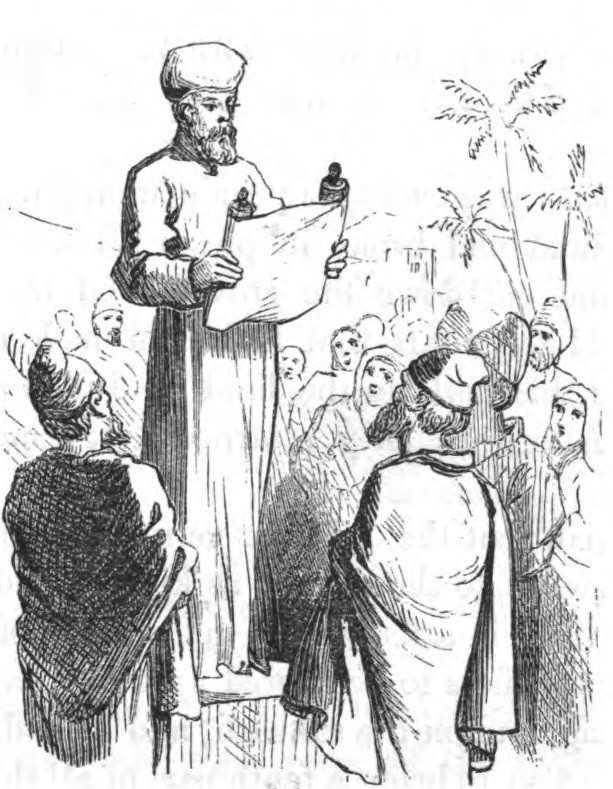 It is often said that the family is the basic building block of society. While this is true, let us remember what kind of society Yeshua wants us to build for Him.

Scripture tells us that Yeshua serves as the head over every man, while the men serve as the heads over their houses.

Qorintim Aleph (1 Corinthians) 11:3
3 But I want you to know that the head of every man is Messiah, the head of woman is man, and the head of Messiah is Elohim.

Some men misuse this verse to justify ruling their wives with rigor, and harshness. However, this is not Yeshua’s way. Rather, His way is to lay down His life for us, and to give us an example of dedication, love and service.

Ephesim (Ephesians) 5:22-28
22 Wives, submit to your own husbands, as to Yahweh.
23 For the husband is head of the wife, as also Messiah is head of the assembly; and He is the Savior of the body.
24 Therefore, just as the assembly is subject to Messiah, so let the wives be to their own husbands in everything.
25 Husbands, love your wives, just as Messiah also loved the assembly and gave Himself for her,
26 that He might sanctify and cleanse her with the washing of water by the word,
27 that He might present her to Himself a glorious assembly, not having spot or wrinkle or any such thing, but that she should be set-apart and without blemish.
28 So husbands ought to love their own wives as their own bodies; he who loves his wife loves himself.

If a woman has no husband (or if her husband is not in the faith) then the deacons can serve and support the wives. However, if the husband is in the faith it is better that the deacons deal mainly with him, as this extends Yeshua’s divine order into the household.

Daniel 9:25
25 “Know therefore and understand, That from the going forth of the command To restore and build Jerusalem Until Messiah the Prince, There shall be seven weeks and sixty-two weeks; The street shall be built again, and the wall, Even in troublesome times.

The word Prince is Strong’s Old Testament 5057, nagid, referring to a military commander who leads from the front.

However, even though Yeshua is Royalty, He does not rule over His people with harshness. Rather, He serves His people through sacrifice. This gives us an example to follow, and if we love and fear Yeshua, then we need to follow it. There are also separate applications of this principle for both husbands and wives.

Kepha Aleph (1 Peter) 3:1-7
1 Wives, likewise, be submissive to your own husbands, that even if some do not obey the word, they, without a word, may be won by the conduct of their wives,
2 when they observe your chaste conduct accompanied by fear.
3 Do not let your adornment be merely outward — arranging the hair, wearing gold, or putting on fine apparel —
4 rather let it be the hidden person of the heart, with the incorruptible beauty of a gentle and quiet spirit, which is very precious in the sight of Elohim.
5 For in this manner, in former times, the set-apart women who trusted in Elohim also adorned themselves, being submissive to their own husbands,
6 as Sarah obeyed Avraham, calling him adoni (my master), whose daughters you are if you do good and are not afraid with any terror.
7 Husbands, likewise, dwell with them with understanding, giving honor to the wife, as to the weaker vessel, and as being heirs together of the favor of life, that your prayers may not be hindered.

When the husband does not give honor to his wife as the weaker vessel, or dwell with her in understanding, then Yahweh hinders his prayers (because that is not what Yahweh wants). Rather, what Yahweh wants is for the husbands to serve their wives in love, and for the wives to respond by seeking to serve their husbands in love. This creates a joyous environment, and when believers do this, it builds Yeshua’s kingdom.

Yeshayahu (Isaiah) 9:7
7 “Of the increase of His government and peace
There will be no end, Upon the throne of David and over His kingdom, To order it and establish it with judgment and justice From that time forward, even forever. The zeal of Yahweh of hosts will perform this.”

However, just as Elohim’s kingdom is not a democracy, neither is the family. In Revelation and the End Times we saw that the (Greco-Roman) democratic new world order will come crashing down at seal 7, while Yeshua’s kingdom (which is described as a stone) will grow to become a great mountain (government) that will fill the whole earth, and rule over it.

Daniel 2:34-35
34 “You watched while a stone was cut out without hands, which struck the image on its feet of iron and clay, and broke them in pieces.
35 Then the iron, the clay, the bronze, the silver, and the gold were crushed together, and became like chaff from the summer threshing floors; the wind carried them away so that no trace of them was found. And the stone that struck the image became a great mountain [government] and filled the whole earth.”

Yirmeyahu (Jeremiah) 6:16
16 Thus says Yahweh: “Stand in the ways and see, And ask for the old paths, where the good way is, And walk in it; Then you will find rest for your souls. But they said, ‘We will not walk in it.’

So, what are the old paths regarding families? First, let us realize that because the man has the authority, he is also responsible for whatever happens, both good and bad. This is just as an officer in the military is responsible for everything that takes place under his command. For example, it was a problem when Avram did not seek Yahweh’s counsel in the matter of Hagar. This shows us that while a man should ideally talk with his wife about everything (and let her have her full say), it is his job to then take the matter to Yahweh, and let Him decide.

B’reisheet (Genesis) 16:1-6
1 Now Sarai, Avram’s wife, had borne him no children. And she had an Egyptian maidservant whose name was Hagar.
2 So Sarai said to Avram, “See now, Yahweh has restrained me from bearing children. Please, go in to my maid; perhaps I shall obtain children by her.” And Avram heeded the voice of Sarai.
3 Then Sarai, Avram’s wife, took Hagar her maid, the Egyptian, and gave her to her husband Avram to be his wife, after Avram had dwelt ten years in the land of Canaan.
4 So he went in to Hagar, and she conceived. And when she saw that she had conceived, her mistress became despised in her eyes.
5 Then Sarai said to Avram, “My wrong be upon you! I gave my maid into your embrace; and when she saw that she had conceived, I became despised in her eyes. Yahweh judge between you and me.”
6 So Avram said to Sarai, “Indeed your maid is in your hand; do to her as you please.” And when Sarai dealt harshly with her, she fled from her presence.

Avram could ask Yahweh because he heard Yahweh’s voice. However, today many men do not hear Yahweh’s voice. The remedy for this is to inquire of a prophet or an apostle in the assembly (at least on major issues). This is because prophets and apostles hear Yahweh’s voice (by definition). However, this kind of inquiry takes a lot of time, and that means there needs to be support for the apostles and prophets, and right relationship within the assembly (i.e., tithing).

Yahweh’s words will not always please us. At times His words can lead to great trials. An example of this is seen in the Agidah (the binding of Yitzhak), where Yahweh told Avraham to offer his son Yitzhak as a burnt offering.

B’reisheet (Genesis) 22:2
2 Then He said, “Take now your son, your only son Yitzhak, whom you love, and go to the land of Moriah, and offer him there as a burnt offering on one of the mountains of which I shall tell you.”

According to one school of thought, this led to alienation between Avraham and Sarah, because when Sarah died Avraham had to travel to where Sarah was buried, to mourn and to weep for her.

B’reisheet (Genesis) 23:2
2 So Sarah died in Kirjath Arba (that is, Hebron) in the land of Canaan, and Abraham came to mourn for Sarah and to weep for her.

Whether or not the Agidah led to an alienation between Avraham and Sarah, the point is that the man is fully responsible for whatever happens in his house. For this reason, he needs to take all major decisions to Yahweh (and let Him decide). This is not the way of democracy, because democracy eventually calls for the husband and wife to be equals, and to share authority equally.

Yet while marriage is not a democracy, and the husband has the final say, he also has the duty to make his wife happy. Yahweh tells us that when a man takes a new wife, he is excused from military service for a whole year, so that he can make his wife happy.

Devarim (Deuteronomy) 24:5
5 “When a man has taken a new wife, he shall not go out to war or be charged with any business; he shall be free at home one year, and bring happiness to his wife whom he has taken.”

Shaul also seems to have understood that a married man is responsible to please his wife.

Qorintim Aleph (1 Corinthians) 7:33
33 But he who is married cares about the things of the world — how he may please his wife.

And, as we already saw, if a man does not give honor to his wife, Yahweh will hinder his prayers.

Kepha Aleph (1 Peter) 3:7
7 Husbands, likewise, dwell with them with understanding, giving honor to the wife, as to the weaker vessel, and as being heirs together of the favor of [the gift of spiritual] life, that your prayers may not be hindered.

Devarim (Deuteronomy) 19:11-12
11 “But if anyone hates his neighbor, lies in wait for him, rises against him and strikes him mortally, so that he dies, and he flees to one of these cities,
12 then the elders of his city shall send and bring him from there, and deliver him over to the hand of the avenger of blood, that he may die.”

City elders can only establish justice when the men of the city support them. Similarly, Shaul also tells us that it is the job of the men to put evil out of the midst.

Qorintim Aleph (1 Corinthians) 5:1-5
1 It is actually reported that there is sexual immorality among you, and such sexual immorality as is not even named among the Gentiles — that a man has his father’s wife!
2 And you are puffed up, and have not rather mourned, that he who has done this deed might be taken away from among you.
3 For I indeed, as absent in body but present in spirit, have already judged (as though I were present) him who has so done this deed.
4 In the name of our Adon Yeshua Messiah, when you are gathered together, along with my spirit, with the power of our Adon Yeshua Messiah,
5 deliver such a one to Satan for the destruction of the flesh, that his spirit may be saved in the day of the Adon Yeshua.

Every man is responsible to make sure the assembly his family attends is free from sin. On occasion this may require a loving rebuke. Yet no matter how loving, when words of discipline or correction must be delivered from family to family, it is the man’s job to deliver them, one brother to another, speaking the truth in love. This is how the assembly becomes safe for the women and children. 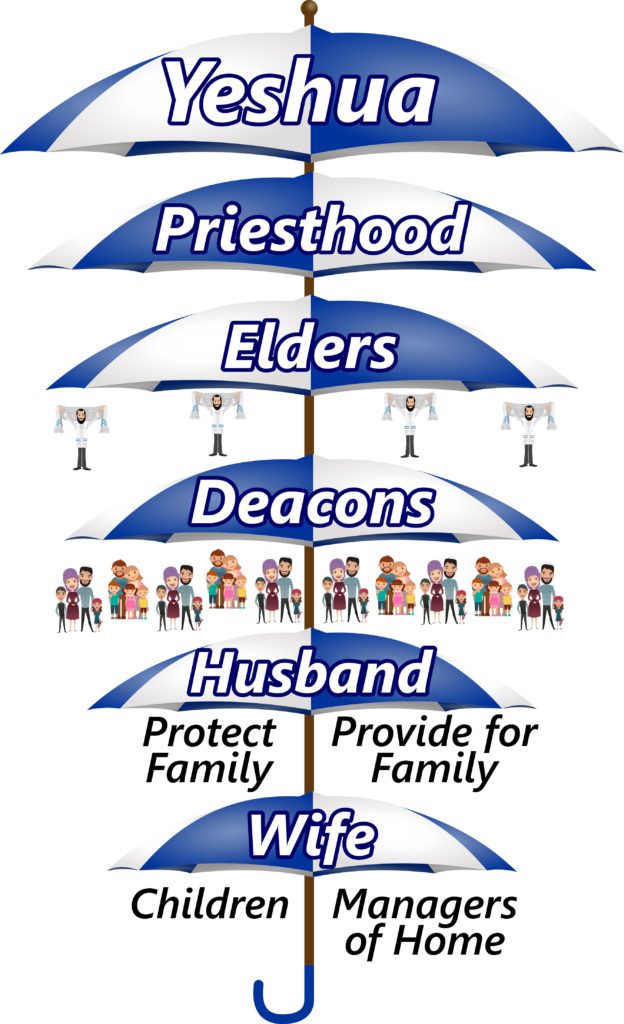