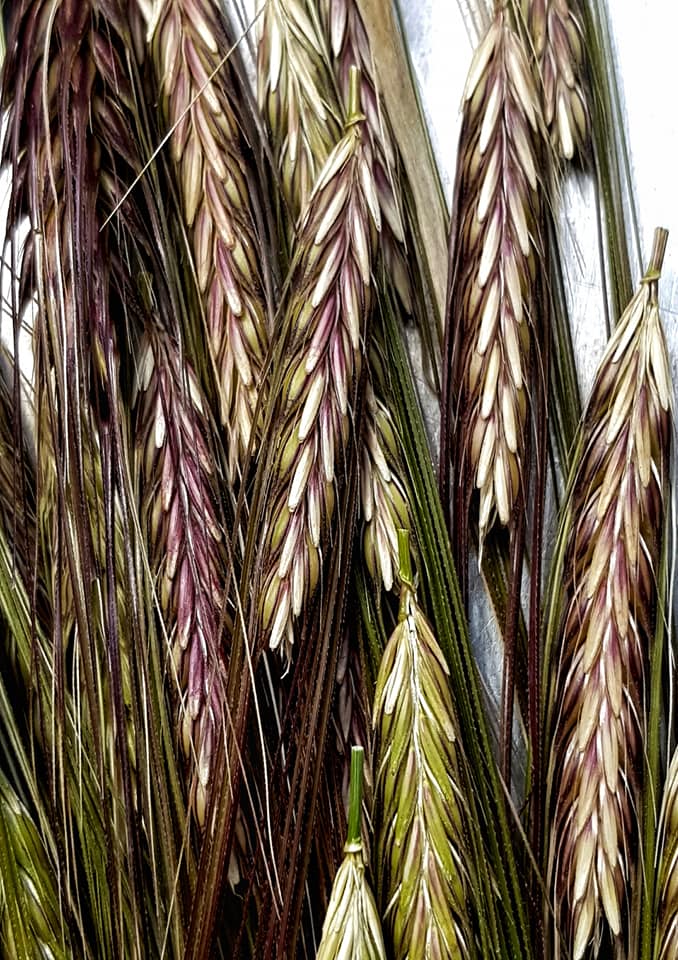 Praise Yahweh, we have learned a lot about barley this year, with the contributions of (Messianic) sister Becca Biderman.

Among the things we are learning is that Aviv barley is barley at the medium dough stage, because medium dough is still tender, green, and young, which matches the definition given in Strong’s Concordance.

However, medium dough is advanced enough that you can parch (roast) it, and grind it into flour. This fulfills Leviticus 2:14-15, which requires the firstfruits offering to have oil and frankincense laid on it (i.e., as cakes).

Further, medium dough barley is viable as seed, meaning that if it falls to the ground it will sprout, and bear more fruit. Yeshua quotes this about wheat, but it should be clear that this also pertains to barley.

Yochanan (John) 12:24
24 “Most assuredly, I say to you, unless a grain of wheat falls into the ground and dies, it remains alone; but if it dies, it produces much grain.”

It is clear that when Yeshua died (i.e., fell into the ground), that many were raised from the dead.

Mattityahu (Matthew) 27:50-53
50 And Yeshua cried out again with a loud voice, and yielded up His spirit.
51 Then, behold, the veil of the temple was torn in two from top to bottom; and the earth quaked, and the rocks were split,
52 and the graves were opened; and many bodies of the saints who had fallen asleep were raised;
53 and coming out of the graves after His resurrection, they went into the set-apart city and appeared to many.

The Wave Sheaf is Early

We also know that wave sheaf refers to early barley, because Yeshua is our Wave Sheaf.

Qorintim Aleph (1 Corinthians) 15:20-23
20 But now Messiah is risen from the dead, and has become the firstfruits of those who have fallen asleep.
21 For since by man came death, by Man also came the resurrection of the dead.
22 For as in Adam all die, even so in Messiah all shall be made alive.
23 But each one in his own order: Messiah the firstfruits, afterward those who are Messiah’s at His coming.

It seems clear that Yeshua was offered as Firstfruits first, and others will be offered as firstfruits later.

Hitgalut (Revelation) 14:3-5
3 They sang as it were a new song before the throne, before the four living creatures, and the elders; and no one could learn that song except the hundred and forty-four thousand who were redeemed from the earth.
4 These are the ones who were not defiled with women, for they are virgins. These are the ones who follow the Lamb wherever He goes. These were redeemed from among men, being firstfruits to Elohim and to the Lamb.
5 And in their mouth was found no deceit, for they are without fault before the throne of Elohim.

But if aviv barley is medium dough, what is Carmel?

What is Carmel Barley?

Carmel is normally translated as “grain beaten from full heads”.

When we look up the reference at OT:3754, we see that it is an unused root of uncertain meaning, referring to a garden.

This may refer to domesticated barley that has been planted.

But, what would it mean that carmel refers to domesticated barley, that has been planted?

Under average normal spring conditions, barley follows an expected development pattern where first the plant grows, and then later it begins to produce seed. Under normal conditions it will only begin to produce seed once it has reached perhaps +/- 80% of its full size. In general and on average, this leads to the maximum reproductive success of the plant. 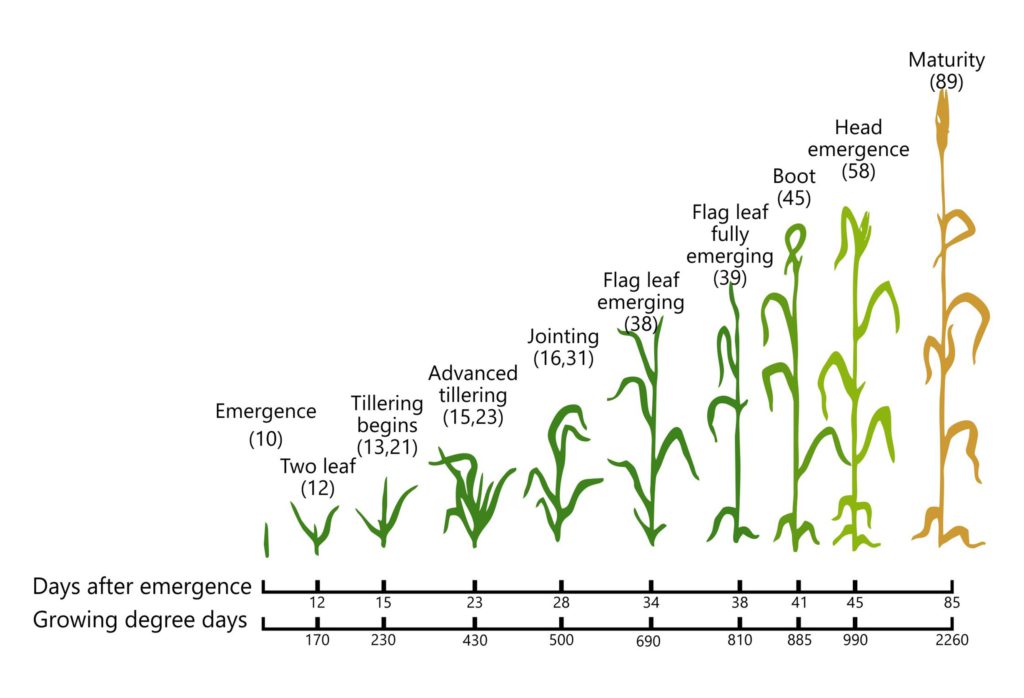 It we are willing to accept it, this may be similar to how most women are encouraged to reach the age of 18-21 before they begin having children. They are allowed to grow at least mostly to maturity before they begin putting their energies into bearing children. However, under highly stressful conditions, that might change.

In ancient times, life spans were much shorter, and life spans were much more tenuous. Young women often married as soon as they reached puberty. Because the mothers had not yet had time to grow to full adulthood, and their bodies were still growing, the people were generally shorter.

To extend the analogy, a young girl who had just reached puberty might choose to have babies if there was a major war, and she had reason to believe that she might not live very long. Even though her body is not yet fully grown, it might make more sense from a reproduction point of view to have children. Barley can face a similar situation.

Barley needs water to grow. When the rains start to dry up, the barley starts to put its energies into producing seed, so that the seeds can carry on the next year.

The winter of 2020/2021 was very stressful for the barley. There was a lot more rain than usual early on, which drowned some of the barley plants. Then there was an unusually long dry and warm spell (of about 30 days), which caused the early plants to flower and begin producing seed (in a first flush). Then there was a return to cold and wet, which slowed growth in the existing plants, and may have caused a new wave of plants to sprout (i.e., a second flush). There would have been about 30 days in between each flush, due to the weather.

This is a screen shot of the first flush from a video by Becca Biderman taken near Reim, Israel (near Gaza). Not only are the stalks short, but because the plants were so young and immature at the time the weather forced them into flowering, there are only two or three grains in each head. 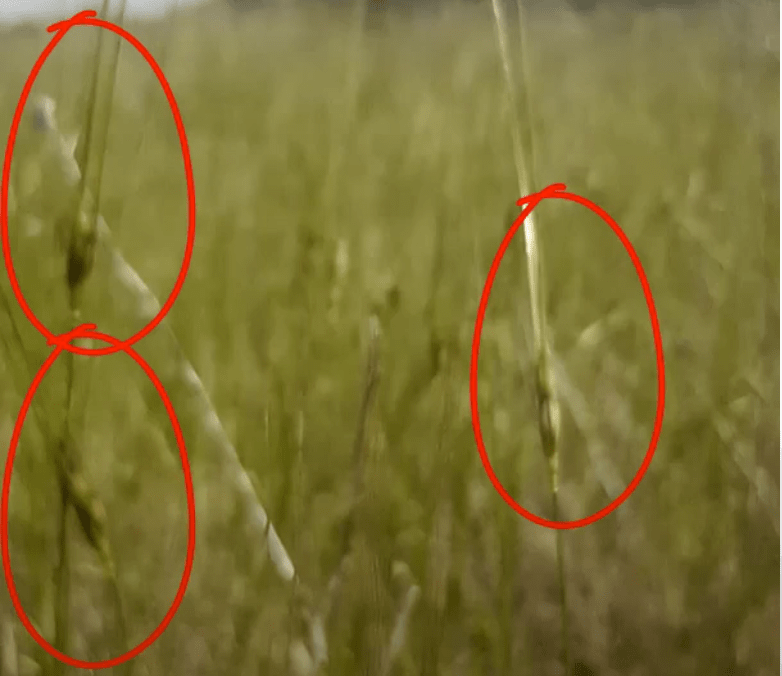 Of course, every farmer hopes for a perfect crop, but that is often a function of modern irrigation, which did not exist back in ancient times. Rather, irrigation was normally dependent on the weather Yahweh sent. If you lived in ancient times and Elohim sent stressful weather conditions like we experienced this year (in 2020/2021), you might have a first flush of barley with tiny heads like this. Yet even though it is only a fraction of a normal harvest, you would want to collect every grain, because that is your food for the year. Therefore, you would offer a sheaf as a wave sheaf offering, and that would clear the way for you to harvest the rest of the first flush in its time, and also harvest the second flush when it came ready. And if the priesthood did not accept this first flush, then you would lose that part of your crop (which you could not afford).

So, if the point of offering a wave sheaf is to present the first of your crop to Elohim, so that He would bless the harvest and set it apart, then could this be the meaning of Carmel, is any barley that you had planted in your garden, even if it was an immature early flush? Because if so, then either aviv or carmel would be immature first grains that would clear the way for the rest of the harvest.

By His Stripes We Are Healed

Another interesting thing about the barley is that when it comes under growth stresses, it can change color to red or purple. Becca Biderman was told that this is due to what are called anthocyanins. These anthocyanins can make a stressed flush appear beaten, striped, or bruised.

Yeshayahu (Isaiah) 53:3-5
3 He is despised and rejected by men, A Man of sorrows and acquainted with grief. And we hid, as it were, our faces from Him; He was despised, and we did not esteem Him.
4 Surely He has borne our griefs And carried our sorrows; Yet we esteemed Him stricken, Smitten by Elohim, and afflicted.
5 But He was wounded for our transgressions, He was bruised for our iniquities; The chastisement for our peace was upon Him, And by His stripes we are healed.

If you plant barley in your field, and the weather caused your barley to be short, stressed, purple, or look bruised, Leviticus 2:14 says it still qualifies for the wave sheaf. And in fact the whole point is to bring a sheaf of the very earliest barley, no matter whether it is aviv (tender, green, and young), or whether it is a stunted or discolored first flush from your garden. The first point is to bring the first, to clear the way for the rest of the harvest.

And in fact, modern science proves that such anthocyanins are potentially beneficial to human health.